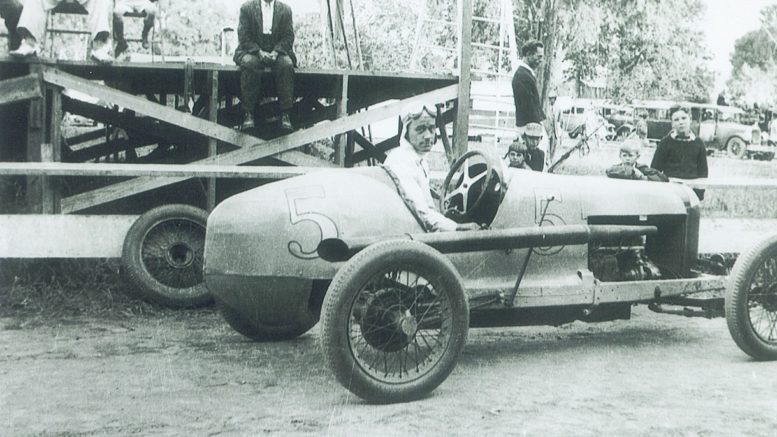 Pictured, is Harry Hornbrook in his #5 “Big Car” at the race meet held on Aug. 29 and 30, 1936 at the Owego Marvin Park track. Photo courtesy of Richard Hall.

Members of the Atlantic Coast Old Timers will be bringing their Vintage Race Cars to the Marvin Park Speedway on Saturday, Aug. 5, and during the Tioga County Fair. Hot laps are scheduled for 3:30 p.m., with heats at 4 p.m. There will be no charge to enter the Grandstand.

Most are surprised to learn that the Owego Fairgrounds track has hosted dirt track racing going back into the 1930’s. Recent research by Tom Schmeh, late of the National Sprint Car Hall of Fame and currently of Owego, has disclosed that the Tioga County Agricultural Society proposed Auto Racing in August of 1934.

The Village Board found fault and sought a motion for a temporary injunction.  Supreme Court Justice Ely W. Personious of Elmira found otherwise and agreed with the Society’s Attorney, Francis J. Clohessy that the Society had a right to present any program it desired for the Fair. Part of Judge Personious’ ruling stemmed from a deed given the Village. Undoubtedly, this had to do with the curious arrangements surrounding the formation of the Owego Driving Park in 1871 by the Pumpelly Family as well as the Deed of Gift from Dr. Marvin to the Village of Owego.

If you visit with the fair on Saturday, Aug. 5, you will be able to not only watch a recreation of those early times, but also view a fascinating historical display by Allan and Richard Tatich of Endicott on many of the early motor tracks in the area, including photos of the early races held in Marvin Park.

Making its first local appearance will be Early Owego Antique Center’s recently restored #44 Hillegass Sprint Car, constructed in 1951 by the Milt Jones Racing Team of Paulsboro, N.J. Powered by a Full Dress Ford Flathead V8 motor, it is rumored that Jim Mead, owner of today’s Milt Jones Team has convinced the original Junkyard Jet, Doug Worthing, to come out of retirement to pilot the #44!

Trophies will be awarded for Midget Champion by People’s Choice, for Sprint Champion by Driver’s Choice and for Grand Champion by the participant who drove the farthest to get to Owego.