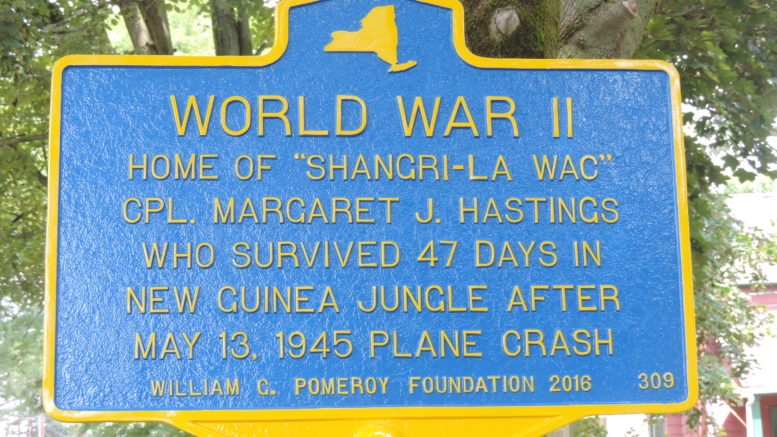 Pictured is a World War II historical marker honoring Cpl. Margaret J. Hastings. The marker was vandalized and stolen on May 20. Found a few days later in Owego, the current homeowner is working to have it repaired and eventually re-dedicated. (File photo by JoAnn R. Walter)

From left, Tioga County Historian, Emma Sedore, and Gaye Sautro stand next to a World War II historical marker in August 2016. Sautro owns the home at 106 McMaster St. where Cpl. Margaret J. Hastings once lived. On May 20, the marker was vandalized and stolen, and has since been recovered. (File photo by JoAnn R. Walter)

A historic marker that was originally dedicated in August 2016 at 106 McMaster St. in Owego, N.Y., the former home of World War II WAC (Women’s Army Corp), Cpl. Margaret J. Hastings, known throughout the world as the “Shangri-La WAC,” has been recovered.

The marker was vandalized and stolen during the late evening of May 20.

Homeowner Gaye Sautro was devastated to find the marker missing. The marker instills pride and a connection to her residence.

Sautro commented, “It’s an insult to Margaret Hastings and to everyone who has served.”

“I feel now that it is my responsibility to take care of it,” Sautro continued, and also remarked that it took a lot of planning and research to fulfill the original project.

The historic marker was made possible by a grant from the William G. Pomeroy Foundation, which helps municipalities and non-profit organizations preserve history through Historic Signage Grant Programs in New York State.

A significant element, the Hastings marker is the only marker in New York State that honors a female veteran.

Sautro picked up the historic marker, which is now broken in two pieces, at the Owego Police Department on May 23. She has since followed-up with an expert welder, whom Sautro explained has the experience to do the repair. Sautro is ready to foot the bill herself in order to get the job done as quickly as possible, unless she can acquire other resources.

According to Owego Police Department Sergeant Brett Kobylarz, the historic marker was found in a plastic garbage bag on Main Street in Owego, near the intersection of Paige Street. The incident is still under investigation.

If there is a silver lining to the story, Sautro explained it is the fact that the story has generated a renewed interest in the Hastings story.

WAC Corporal Margaret J. Hastings, stationed at a remote base in Hollandia, New Guinea where she worked as a secretary during WWII, joined a sightseeing tour to fly over a village that was rumored to have been occupied by headhunters. The time period was a few days after V-E Day (Victory in Europe Day) and just three months before Japan surrendered. Twenty-four people boarded a C-47 for the trip, however the plane crashed into the side of a mountain on May 13, 1945 and took the lives of 21 of the passengers; Cpl. Hastings, Lt. John McCollom and Sgt. Kenneth Decker survived.

It is said the media coined the term “Shangri-La,” yet it was hardly paradise, but more a story of extreme survival. After 47 days in the jungle, and with the help of natives and Army search crews, the three safely left on June 28, 1945.

Hastings’ story became a media sensation in the United States. A hero’s welcome greeted her when she returned to Owego, and afterwards Hastings delivered over 200 speeches on a Victory Bond tour, where she met then General Eisenhower and other celebrities of the day.

Hastings did reunite with McCollom and Decker in 1974. She passed away in 1978 and is buried in Owego’s St. Patrick’s Cemetery.

Retired U.S. Air Force nurse Major Danielle Ingram was at the 2016 dedication ceremony and explained that Hastings’ story is a symbol of the history of WAC, which started in 1942 and paved the way for women in the military.

At the dedication last year, Ingram said, “The ‘Shangri-La’ Corporal is a national hero. Owego, her hometown, honors her for her bravery and accomplishments.”

Once the historic marker is repaired, Sautro will work with Tioga County Historian, Emma Sedore, to arrange a re-dedication.