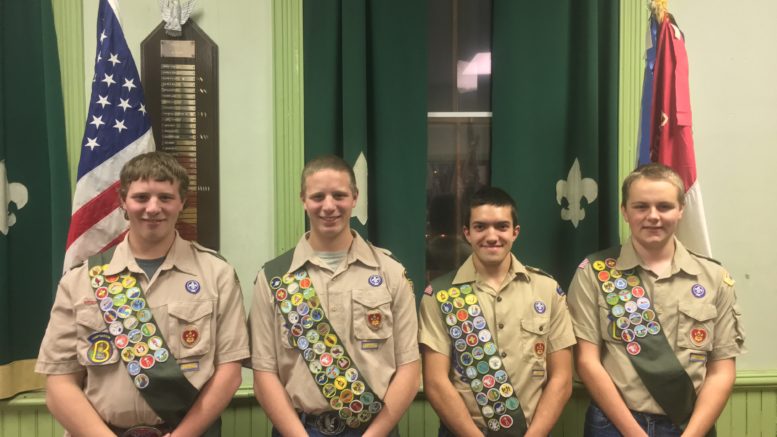 Pictured, Corey Coombs, Cody Coombs, Josh Blazey, and Jake Andersen have all made the journey together from Tiger Cubs to Eagle Scouts.

Four scouts from Newark Valley Troop 30 have earned the rank of Eagle Scout. Corey Coombs, Cody Coombs, Josh Blazey, and Jake Andersen have all made the journey together from Tiger Cubs to Eagle Scouts.

Corey Coombs’ Eagle Scout Project benefitted Rawley Park in the Town of Richford. The picnic tables at the park were in poor condition as many were broken, had many nails and tacks in them, and had graffiti on them. Corey revitalized these picnic tables by taking them apart and replacing the damaged boards. He had to assess each table and determine which boards needed to be replaced and determine what materials were needed to complete this project. He gave each table a new coat of paint when it was repaired. He also constructed two new picnic tables to add more seating under the pavilion.

Cody Coombs’ Eagle Scout Project benefitted Ketchumville Cemetery in the Town of Newark Valley. He organized a workday and the cemetery was completely cleared of fallen limbs and old leaves. Tree branches were trimmed and overgrown brush was removed that surrounded many of the gravestones. The chain link fence was repaired around the perimeter of the cemetery as it was broken in many places. He also designed and erected a cemetery sign and directory that is now hung on the fence.

Corey and Cody Coombs are both seniors at Newark Valley High School. They are the sons of Scot and Melanie Coombs of Newark Valley.

Jake Andersen’s Eagle Scout Project was completed at the training grounds of the Newark Valley Fire Station. His project was to pour a concrete floor in a pavilion that will allow the firefighters to have a dry and clean area to utilize during their training sessions. He secured supplies, organized the work crews, scheduled work times, as well as material deliveries, and supervised the completion of the concrete floor. Jake is a senior at Newark Valley High School. He is the son of Pat and Pam Andersen of Berkshire.

Congratulations to all four boys for their outstanding achievement in Boy Scouts!