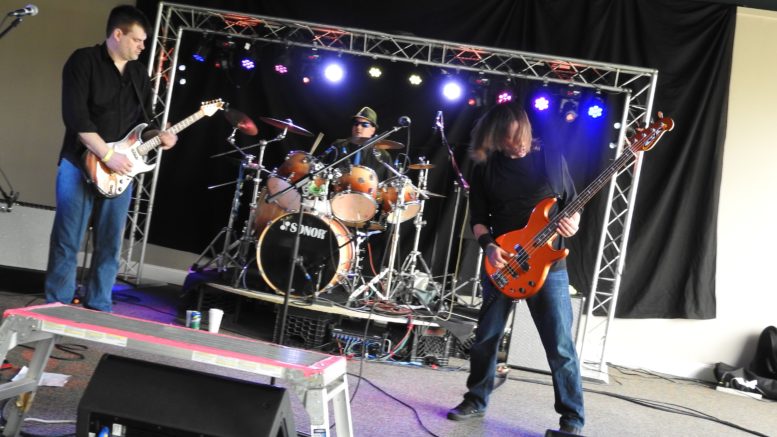 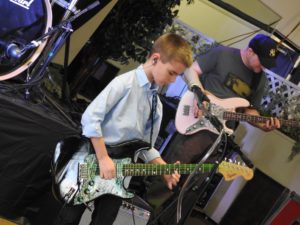 Eight-year-old Eamonn Hubert wowed the crowd on Saturday as he performed at Shelter Slam with his band, Hot Dogs & Gin. (Photo by Wendy Post)

An admission of $10, or an equivalent of pet food allowed guests to enjoy close to two dozen bands on two separate stages for the all day event.

“We’re hoping to raise at least five thousand today,” said Delola at the start of the event.

Delola added, “If you go to rescues like Willow’s Wings, you see all they do for the animals they rescue. He noted that some of the rescues that benefit from the concert pull animals from “kill” shelters. 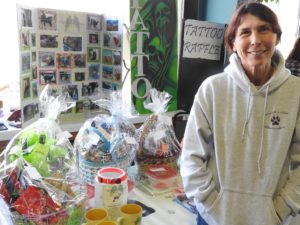 Pictured is Willow, from Willow’s Wings. Willow was at the event on Saturday to offer information about her rescue. (Photo by Wendy Post)

Willow, who was at the event with a display that outlined her rescue organization, stated that she currently has 143 rescues of a dozen different species.

“The vet bills are astronomical,” stated Willow when asked about the challenges of running a rescue organization. “Feeding them is the easy part,” she added.

With funds raised being donated to rescues like Willows Wings, it offers them some assistance with their veterinary and medical bills, as well as costs associated with housing and feeding the animals.

And the bands and the community united for this cause, with both rooms at Endwell Greens completely filled with supporters of the event by the time the evening rolled around.

But it was Eamonn Hubert, from Hot Dogs & Gin, that was drawing attention. The eight-year old, who plays lead guitar and sings vocals alongside his dad, Doug Hubert, was showing his talent performing cover songs like Hotel California by the Eagles.

According to Eamonn’s mom, Jimae Hubert, he has been around guitars his entire life and got serious with them when he was five years old. Over the past two years, Eamonn has played with his bands at over 140 shows in several states.

Jimae noted that her son says he wants to be a professional musician. “That’s all he knows,” Jimae added. To view a video of Hot Dogs & Gin, visit https://youtu.be/p0saLZXLm7U.

And because of the turnout, the organizer has already started planning for the next ‘Shelter Slam’ event, which will be held in August. To learn more about Shelter Slam, visit www.shelterslam.com.

Be the first to comment on "Full Story: A slam-dunk for animal shelters"