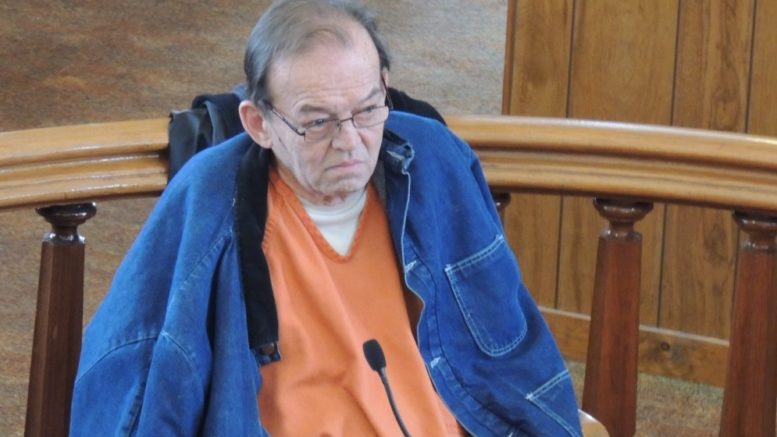 In this photo, Douglas Every, who was 63 years old at that time, listens as Judge Gerald Keene hands down a sentence of 17 years in prison and five years of follow-up supervision on charges of Manslaughter 1. Douglas Every was found guilty of Manslaughter 1 following the fatal stabbing of Milton Jump Jr. on Oct. 23, 2013 at Douglas Every’s Thorn Hollow Road residence in the Town of Tioga, Tioga County, N.Y. The sentencing took place at the Tioga County Courthouse in Owego, N.Y. on Friday, Jan. 30, 2015. (File Photo / Wendy Post)

On Jan. 19, 2017, an appeals court in Albany denied a request from Douglas Every’s attorney to reverse a judgment of his manslaughter conviction.

The manslaughter conviction stems back to an incident in October of 2013, when Every, a local, well-known realtor, stabbed Milton Jump Jr., of Barton, N.Y., at Every’s Thorn Hollow Road residence in the Town of Tioga during an altercation that was fueled by alcohol.

Every was charged with murder in the second degree and tampering with physical evidence, but the jury acquitted Every of the charged crimes and convicted him of manslaughter in the first degree as a lesser, included offense.

Every was sentenced in January of 2015 to 17 years in prison and is serving his time at Green Haven Correctional Facility, a maximum security prison in the Town of Beekman in Dutchess County, New York.

In the appeal, Every’s attorney, William Easton of Rochester, N.Y., claims that the Tioga County court erred in precluding certain testimony regarding the victim, 39-year-old Milton Jump Jr.’s prior threats of violence.

The attorney also claims that the court precluded testimony that Every had contacted a friend approximately two months prior to the incident and told her that he had locked himself in the bedroom due to the victim’s behavior.

The attorney also argued that the court precluded testimony about the victim’s reputation for violence, and that Every was also deprived of a fair trial and meaningful representation.

The document, which is now posted under D.O.C., or Documents on Command, outlines these arguments, among others within its 18 pages. You can click here to view the document.

Five judges reviewed the arguments filed by Every’s attorney, and among those five, four affirmed the conviction handed down to Every – while one judge disagreed.

Another argument of Every’s is the sentence, with Every’s attorney stating it was harsh and excessive. The four judges, in their affirmation, stated, “We note the sentence was eight years less than the defendant could have received. In view of the violent nature of his crime and his failure to express remorse, we find no abuse of discretion or extraordinary circumstances warranting modification in the interest of justice.”

The dissenting judge, however, felt that Every’s testimony of self-defense received insufficient representation.

Within the decision, the dissenting judge stated, “With the jury’s attention tethered to the notion that the defendant should have retreated – when defendant had no obligation to do so because he was in his home when the stabbing occurred – the jury was free to disregard any of the evidence demonstrating that defendant was justified in stabbing the victim.”

With that statement, among others, the one dissenting judge recommended a reversal of the judgment of conviction and suggested a new trial.

With only one judge in disagreement with the judgment of conviction, it was the appellate court’s ruling that the original conviction remains affirmed, and Doug Every will continue his sentence.

We attempted to contact both the district attorney and defense lawyer for comment, but did not receive a return phone call as of the time of this reporting.

Be the first to comment on "Appeal denied for Douglas Every"