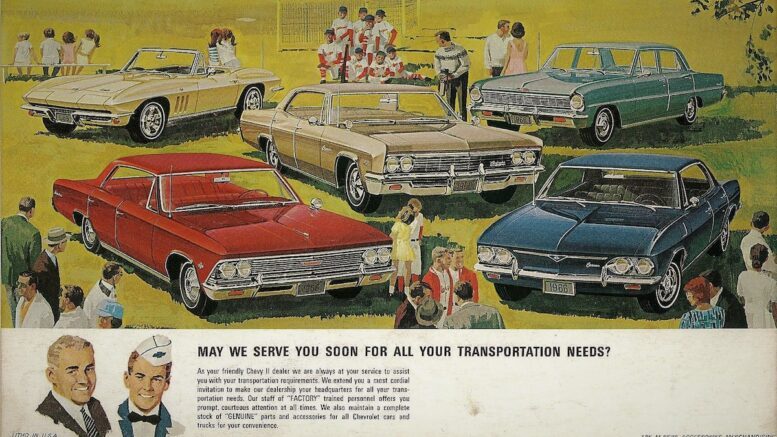 The Chevy Corvair, produced from 1960 to 1969, complimented Chevrolet’s family of cars. It sits at the extreme right on this 1966 Chevrolet Family advertisement. (GM)

Q: Greg I like Chevy Corvairs that roamed in the 1960s. What are your feelings about the Corvair as an entry-level collector car? They seem to be priced way lower than other collector cars. Thanks much, Robert F. retired in Spokane, Wash.

A: Robert, Corvairs are very reasonable in price, and since you already know they won’t ever be high priced collector gems I say have at it! I own a lower priced collector car, too, namely my 1980 AMC Concord. I have less than $4,500 invested and it only has 27,000 original miles. Thus, I’d say you’re in a good position as far as money needed to fuel your passion with a Corvair.

I’ve always personally liked Corvairs because of the car’s unique rear-engine, rear-drive technology, regardless of what Ralph Nader said about the car in his book. Specifically, Corvairs received a “bad rap” from Ralph Nader when he wrote the book “Unsafe At Any Speed,” which knocked the car as one of the most dangerous ever built. This wasn’t really true, for as long as you followed the manufacturer’s recommended tire pressures, 15 pounds in front, 26 pounds in the rear, the car wouldn’t “sway” in the rear much at all. 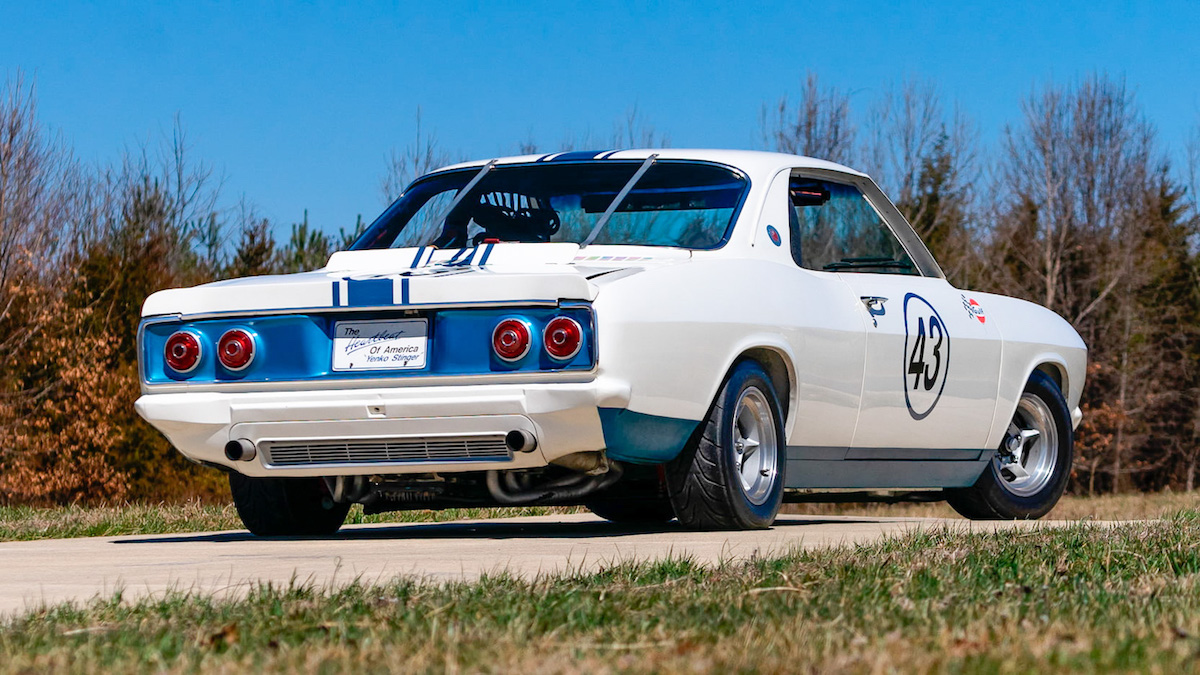 If you want the ultimate Chevy Corvair, it’s the Corvair Stinger. Don Yenko, the famous muscle car and COPO (Central Office Production Order) builder operating from his Chevy dealership in Canonsburg, Pa., assembled 115 Corvair Yenko Stingers that were built for SCCA racing. Today it will take a minimum of $70,000 to buy one, if available. (Hagerty)

However, in Ralph’s defense, we all know how often people check their tires pressures, right? In the end, it took a Congressional Investigation and report to clear GM and the 1960-63 Corvairs of any wrong doing, although the absolution came three years after the car’s 10-year production run ended in 1969.

Corvair models like the Monza Spyder Convertible Turbo or even a regular Corvair convertible or coupe are priced to buy. I remember seeing a Corvair Convertible completely restored in showroom condition in the Auto Roundup Monthly magazine for less than $10,000, while early model Corvair coupes were listed from $4,000 to $6,500.

Good luck in your search for a really neat car from the past and if you want top of the line, it could take up to $18,000 for a restored Spyder Turbo ragtop. 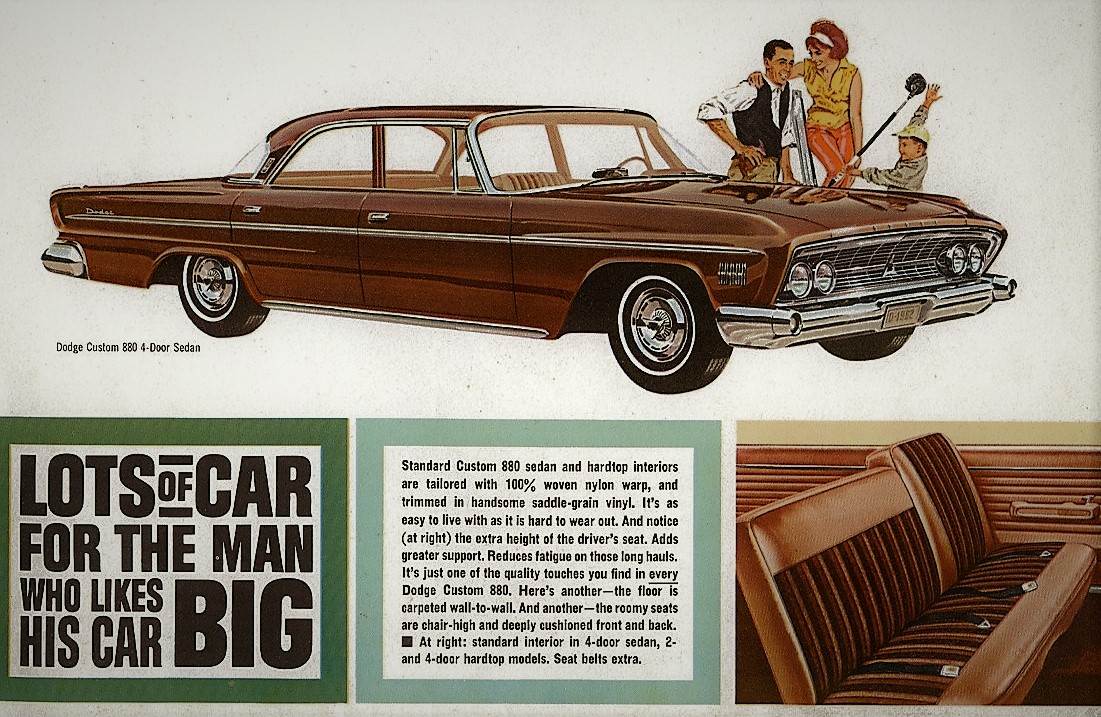 A 1962 Dodge 880 is a combination of a Chrysler Newport with a Dodge front clip and Chrysler rear deck. This week’s column tries to track down info on a Newport with a 3-speed stick on the floor. (Chrysler)

In summary, Corvairs are decent collector vehicles in all shapes and sizes. Now if we want to talk a Yenko Corvair Stinger, which is a special performance version built by Don Yenko Chevrolet from Canonsburg, Pa. back in 1966, we’re talking much bigger dollars. Only 115 Stingers were ever built, 114 1966 models and one 1969 version. They are worth a bit north of $70,000 now, according to Hagerty collector car insurance.

Thanks for your letter and kind words.

Q: Is it true there was a 1962 Chrysler Newport 2-door coupe, and that only seven were ever built to be used as a dealer display model? I read a story once in a magazine that the car was half Chrysler and half Dodge, and came with a big V8 and a 3-speed floor transmission. Thanks Greg, we enjoy your columns. Harry L., Montrose, Pa.

A: Harry, that story you read in the magazine was written by me! It was in many newspapers also. The car you speak of was a Chrysler Newport that came delivered with 3/4 of a Dodge 880 body (windshield area to rear), a 61 Newport front clip, a 361 V8, 3-speed manual shift on the floor, and a 40/60 bench seat. It also had crank windows, manual steering, and drum brakes all around.

Each one of the seven built had one option, a gold tone AM radio. These cars were sent to dealers to be priced at $2,939. A person that owned one by the name of Brian K. from Sodus, N.Y. even had the build sheet for his car, but he couldn’t find production numbers to prove only seven were built.

Brian’s father was a Chrysler tech employee in the 1960’s, but never saw one like this in the production records and there was nothing in any of his old manuals. The Chrysler museum at Dearborn, Michigan could only find records for 10 3-speed transmissions, which were sent to that Chrysler assembly plant. 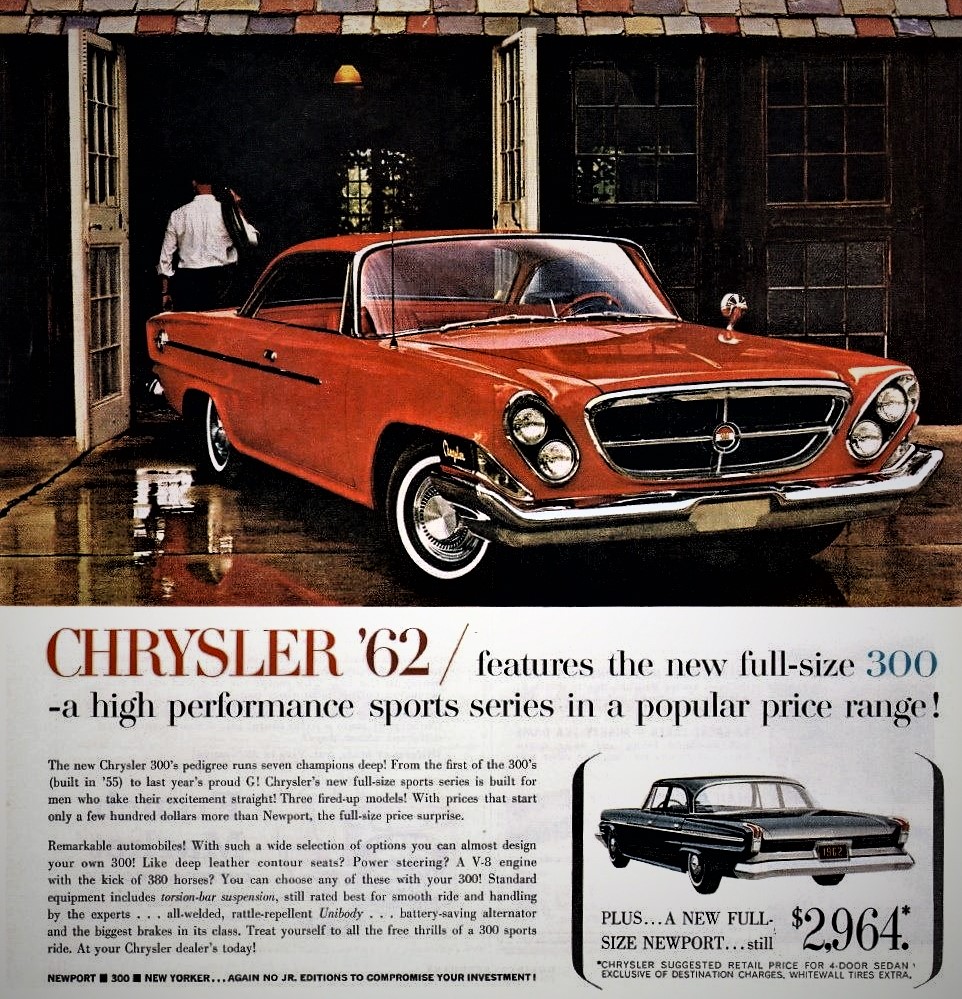 The 1962 Chrysler Newport was an excellent replacement for the out-of-production DeSoto line, which ceased manufacturing in 1961. (Chrysler)

I was hoping one of my readers back then could help you out, as I couldn’t find anything about a car like this. However, because Brian had the build sheet, it proves that the car was indeed factory built and worthy of some additional collector price considerations with the 3-speed floor shift.

Chrysler first used the Newport name way back in the 1940s and 1950s, but it wasn’t until 1961 that the Newport became a standalone model. The lower price, full-size entry-level 1962 Newport carried a base price of $2,964 with the 361 V8, which is very close to the mystery ’62 Newport in question’s $2,939 value. With the demise of the DeSoto line following 1961, the Newport was an instant hit, even in “plain Jane” version. Many had crank windows, but I don’t remember any with that 3-speed on the floor.

However, the 1962 Dodge models used the 1961 Dodge front clip and the Newport’s nice looking rear end clip and interior. The Dodge Custom 880 became available in January of 1962.

This special Chrysler has the Newport front end, and since Dodge shared the Newport rear clip, the ’62 Newport actually has the official Newport rear clip, too; so the way I see it, the ’62 Newport is 100-percent Chrysler as it was Dodge that shared the Chrysler 3/4 body / interior and chassis with the Dodge front end in 1962. The rear of a 1962 Dodge Custom 880 is exactly the same as the Chrysler Newport, sans the badges, making it a Chrysler Dodge mixture design.

I know this is confusing, but I hope it helps. Still, that 3-speed manual on the floor delivered from the factory with build sheet info makes this all the more interesting. Thanks for your letter.

(Greg Zyla is a syndicated auto columnist who welcomes reader comments and questions on collector cars and auto nostalgia at greg@gregzyla.com).