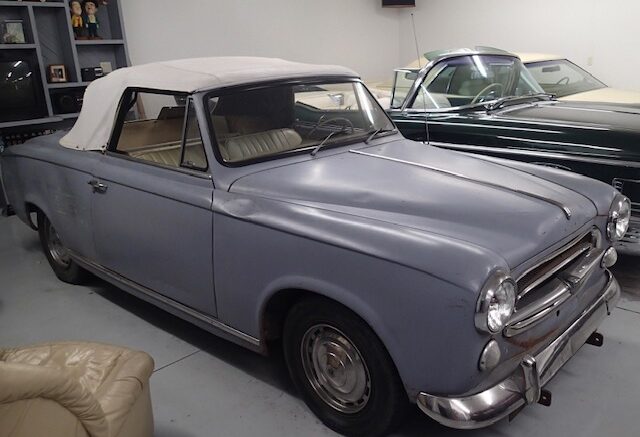 The original Columbo TV series 1959 Peugeot is still in its original condition, which means a bit rough to match the outward style and dress of Peter Falk’s Columbo character. The car is now for sale and this writer is hoping it ends up in good hands. (Delaney collection)

We’re back in the mailbag this week, so here we go.

Columbo’s original ’59 Peugeot up for sale

Q: Hi Greg, and we are reaching out to you after I just found an article online about you talking about the Columbo TV series car. We own the original 1959 Peugeot 403 used in the Columbo series and have had it for 40 some years. We bought it after the last episode and then lent it back to TV for the Columbo second series run.

At the time we lived in Findlay, Ohio, but now we live in Indian Rocks Beach, Fla. We have so enjoyed the car through the years with family, friends, and even strangers who we met that were big Columbo TV fans.

With getting older and trying to keep up with our small car collection, we feel it’s time to downsize. It’s been hard to find a buyer because with the times that they are, finding younger generation (interest) is difficult because they just don’t know who Columbo is or was. Yikes, we are getting older! 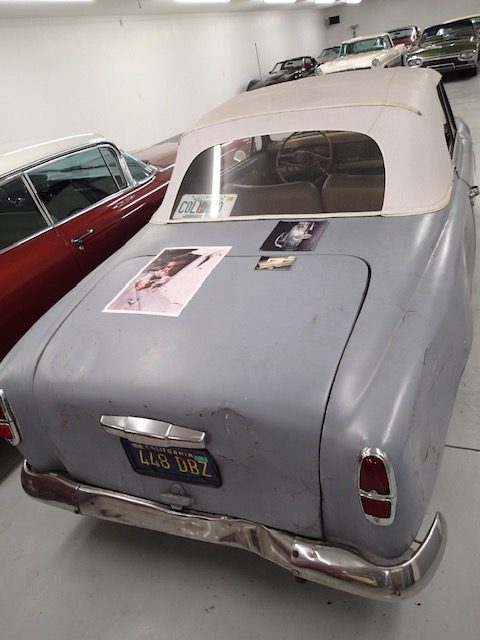 Rear view of the Delaney’s Columbo car Peugeot 403, selected by Peter Falk himself to be the car he drove in the award winning Columbo TV series. It has the correct 448 DBZ license plate for the ABC-TV second series that kicked off in 1988. (Delaney Collection)

Still, the Columbo car is a piece of history so much so that I think someone would love to preserve the Peugeot and want to enjoy it as we have.

There was a news crew from Germany that did a documentary on TV cars in the U.S. and our Columbo car was included. It was fun to watch them film our car and my husband drove it around the neighborhood as they tried to recapture the feel of the Columbo days.

We just are wondering if you may know of someone interested in purchasing this beloved classic and give it a new home. It would be great for the car. Further, Rick Finny from the Transportation Department at Universal Studios told us we indeed 100% own the car Peter Falk picked out himself to drive on the show. 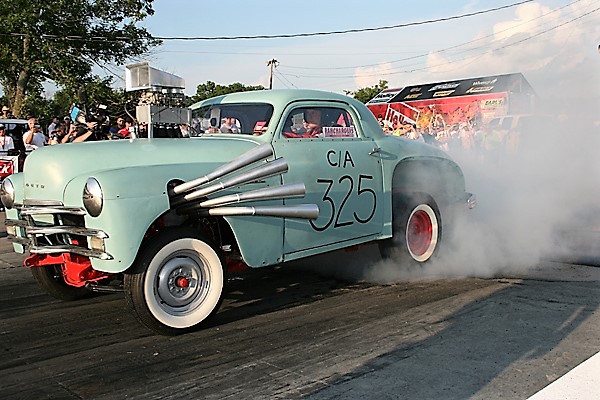 A photo of The Ramchargers “High & Mighty” 1949 Plymouth Business Coupe made a pass at the recent NHRA National Hot Rod Reunion sponsored by Holley. (Photo by Bill Groak)

You know a lot about Peugeot, and your feature in The Times Herald was interesting to read. Thank you for your time and being so helpful. The asking price is tough (to determine). The guy that did the documentary said he would get back to us on a value he feels is right for the car. He’s traveling out of the country now, but said it would be soon.

A while back we would have probably come close to what we wanted to sell it for. But times are a changing, and we need to sell it.

Jim (husband) feels we should now make the asking price in the mid six-figure range, however we’re willing to negotiate. We think it would be good for us to talk with the interested buyers and go from there.

Thanks again for your help. Our email is cnjdelaney@aol.com for interested collectors. Connie and Jim Delaney, Indian Rocks Beach, Fla.

A: Connie and Jim, I personally feel your best shot at getting the higher dollar you seek would be to track down one of the major auto museums that feature famous television car that don’t want you to donate the car. I feel there are some museums out there that would be interested in the car Peter Falk made famous, but am aware that most museums seek a car donation in return for a nice tax write-off. A museum could make a real nice display and feature many items that were on the show, and maybe even a Bassett Hound dog doll hanging out of the window. Still, finding an interested Colombo lover buyer would be the ultimate.

I believe you are correct that finding a younger generation buyer that would appreciate the 1959 Peugeot in its classic, dented form, could be a tough sell. I know there are some younger consumers that might, but I fear they would look at your car as just a ’59 403-convertible that needs work. Maybe an online auction would be interested, like Barrett-Jackson or Mecum. You just never know.

Although I feel the price you seek is a bit high, I’m always surprised at the millions of dollars some people pay for collectible TV cars. (Read that I don’t really know what your car will sell for). Regardless, you’ve had a wonderful ownership of a special car and, I’ll repeat, the car best belongs in an auto museum, but hopefully you find that special, non-museum buyer. Let me know what happens and thanks for your kind words.

Q: Greg I want to know if you have any information about the 1950 Plymouth Business Coupes? I had an uncle that owned one back in the mid-1950s and always liked that car. I was only 12 at the time and today, when I go to a car show, I never see any of these special Plymouths. Is that because not many were sold? Can you give me info on the engine, too? I would appreciate anything that you can find out for me, especially production numbers. Thanks Greg, Jerry S., near Westerly, Rhode Island.

Powered by a 217.8 cubic-inch inline flathead 6-cylinder that produced 97-horses, the 1950 models were pretty much identical to the all-new, post war 1949 Plymouths with a few grille and rear end tweaks. Noted for its two-door only, no back seat design with room for just three in the front, Plymouth Business Coupes became favorites not only with traveling sales people, but also with drag racers.

Another notable is that the 1949 Plymouth Business Coupe was the very first car Lee Petty raced in NASCAR, he of the famous Petty racing family and father of Richard.

Peter Falk standing next to his ’59 Peugeot 403 in the Colombo TV series. (ABC)

However, the most famous Plymouth Business Coupe was, in my opinion, the 1949 “High and Mighty” fielded by a group of Chrysler Corporation engineers. Their car (see photo) featured huge equal length exhaust headers that looked like trumpets, a very high stance and a powerful 354-inch Hemi racing engine under the hood fueled by dual quads on a homemade tunnel ram intake. Looks it lacked, but it ran like the dickens.

Most important is the fact that this drag racing ’49 Plymouth Business Coupe was the prelude of things to come, specifically the formation of the most famous Chrysler Corporation factory racing teams in history, namely The Ramchargers. Yes, this exact team became The Ramchargers and their first racecar “High and Mighty” won the C/Altered class at the 1959 U.S. Nationals.

In summary, I’d say the 1949 and 1950 Plymouth Business Coupes are even more rare these days when you take into consideration the normal attrition of a car like this and junkyard crushing. In my opinion, I’d guess that perhaps a few thousand 1950 Business Coupes have survived of the less than 17,000 ever built.

Thank you for your letter.

Be the first to comment on "Collector Car Corner/Cars We Remember; The real ’59 Peugeot 403 Columbo TV car is for sale; 1949-1950 Plymouth Business Coupe memories"