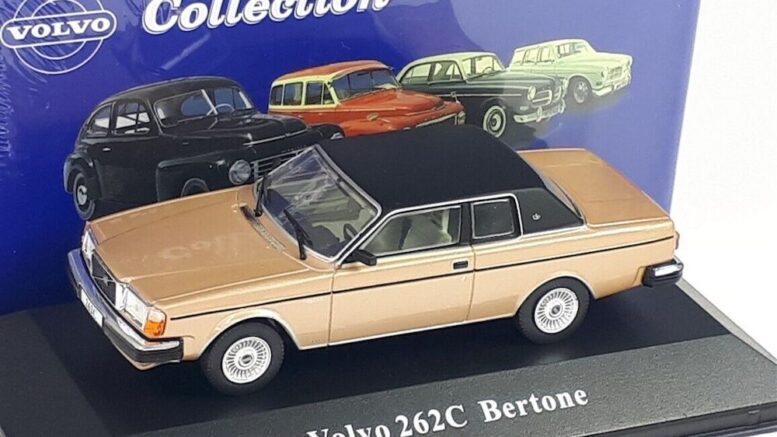 The 1978 Volvo 262C Bertone had an engine developed by Volvo, Renault and Peugeot. Less than 7,000 were ever built, but it is available in scale model die-cast form at model shops around the country and many online sites. (Volvo)

Q: Greg, I remember Cadillac had its own United States postal stamp two times of the big fin Cadillac’s in 1995 and 2008. What is your recall of the fin era car designers? I know you lived through this era of car design craziness. Earl L., Spokane, Washington.

A: Earl, I sure did and remember it well. As we move quickly to the year 2023, automobile design nowadays void of what once was a big design item – the tail fin. Today’s car are sleek and aerodynamic, which is a far cry from those memorable cars of 1948 through 1960, where bulk, big fenders and lots of chrome were highlighted by some of the biggest tail fins in the history of automotive design.

One of the most elegant cars released in 1958 was the Buick Limited, shown here in convertible trim. Only 7,483 Limited’s were built, of which less than 900 were convertibles. (Mecum Auto Auction)

Due to restrictions on civilian automotive production during the war years, Earl’s “aircraft inspired” car design had to wait until 1948, when a Cadillac rolled off the assembly line with small, ducktail like, rear fins. Although minute in comparison to what was to come, the ’48 through ’56 Cadillac’s all utilized the same Harley Earl stylish appendage and evolved into a statement of elegance along the way.

What followed, however, was unlike any period in auto design history.

Always correct as the founder of its aesthetic design statements, Cadillac found its blueprint fin motif slowly being imitated by competing designers. By 1956, a blatant (and at times grotesque) “fin frenzy” began.

Chrysler Corporation initiated the fin slugfest, applying to its Dodge, Chrysler, DeSoto and Plymouth lines individualized fin treatments that literally overpowered every car on the road. The public responded by gobbling them up and fueling the fin era. Although several of the lines, most notably the ’57 Dodge and ’58 Chrysler 300D, were inspiring, the culmination of bad taste came when the 1960 Plymouth Fury rolled off the line – ugly was the word 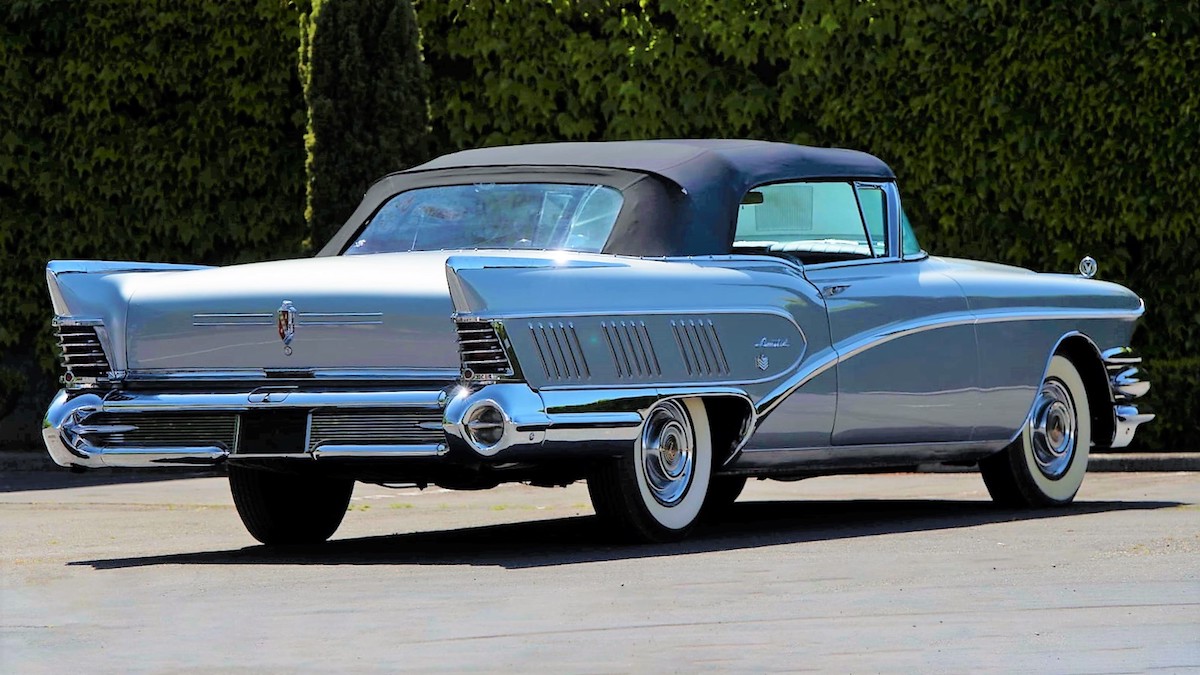 One of the most elegant cars released in 1958 was the Buick Limited, shown here in convertible trim. Only 7,483 Limited’s were built, of which less than 900 were convertibles. (Mecum Auto Auction)

Every other manufacturer participated in “fin wars,” although makes like Chevrolet and Pontiac took a minor plunge. Matter of fact, ’57 was the only year the duo toyed with straight-up fins. In ’58, Chevy introduced its twin and triple taillights via a sideways fin, with even more fin emphasis (and a single tail lamp) in ’59. Chevy toned down the fins in 1960, re-introduced the dual and triple taillights and, come ’61, emerged totally finless. As for Pontiac, there were no fins in ’58, and small ones in ’59.

Buick, meanwhile, was pretty classy with fins in ’58, and then over-expressed the design in ’59 with huge angled fins that created much design chatter. Toned down in 1960, Buick’s fin experiment was history the next year while Oldsmobile fell somewhere in the middle of the fin wars, playing a bit with fins in the late Fifties and then pulling back.

Ford receives credit for the best fins of all, albeit it small in comparison. The ’57 Fords and Thunderbirds sprouted small fins that lasted until 1963, when the mid-sized Fairlane still sported them in fine fashion. Mercury opted for  “twin-fins” on some of its cars, and seemed a bit mixed up at times as to proper “fin-time” adaptation, as did the short lived Edsel. As for the largest fins in the Ford family, Lincoln receives the nod for its numerous “biggies” along he way. 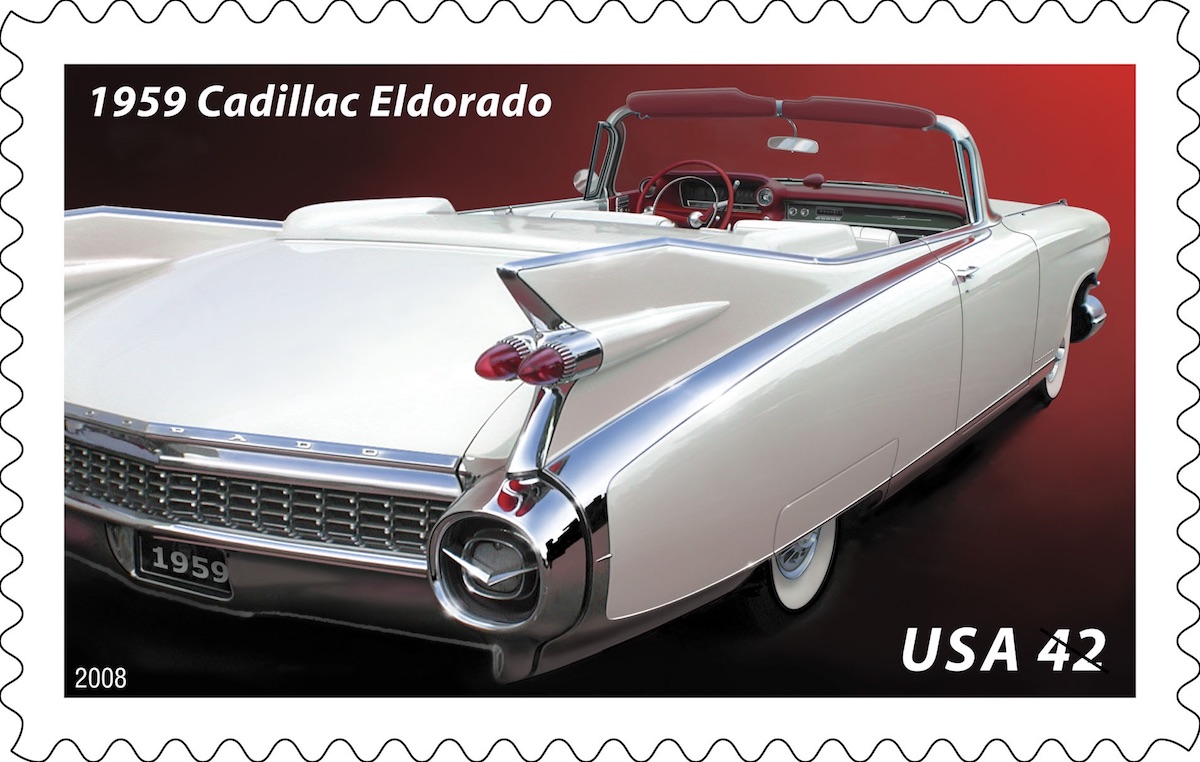 Still, it’s the ’59 Cadillac that received the official “stamp of approval,” as you noted; best representing fin integrity and originality. Cadillac’s ’59 model was singled out twice by the postal service in 1995 and 2008 with official USPS stamps.  I have to agree with the selection of a 1959 Cadillac by the USPS as a special breed (I have a red 1/24 Franklin Mint model of that very vehicle).

In summary, the “fin frenzy” era designers simply danced to the drumbeats of the car-loving consumer with cash in hand. Good or bad, the fin war era was a great time in automotive design.

Q: Greg, I’ve always been a Buick fan and recall a Buick Limited, which I think came out back in 1958. Do you remember this special Buick? Thanks much and keep writing about the good old days. Greg L., Ithaca, N.Y.

A: Greg, back in 1958 I was at the Steel Pier in Atlantic City with my parents and cousins and I sat in this very car. We were all at the General Motors exhibit, which was included in the price of the Steel Pier admission as guests had to go through the GM exhibit to get into the famed Pier. Later, I think GM talked the Steel Pier management into letting people come in off the boardwalk free of charge to see the new cars even if they didn’t have a Steel Pier ticket.

At the age of nine I was always excited to see all the new GM cars, and it was indeed 1958 when Buick came out with that Limited model. It was available in either a 122-inch or 127.5-inch wheelbase design and was more expensive than the Buick Roadmaster. I also remember I could set a speed limiter on the speedometer, which I thought was really cool and also available on Pontiac and Oldsmobile models that year.

Limited models featured special rear taillights, rear bumper as tank access, an air-assist suspension, and a 10.1 compression 364-inch V8. Three Limited models were available, including a two-door hardtop, four-door hardtop or the very valuable two door convertibles, the latter of which only an estimated 875 were ever built.

On the 127.5 inch wheelbase Limited, the entire overhang” on the body went to the trunk area, making this car a rare behemoth by today’s standards. Only 7,483 Limited’s overall were built in 1958, but the Limited was gone from Buick’s lineup in 1959.

Other 1959 Buick notables were huge rear fins and model name changes, going from Special, Century, Super and Roadmaster in ’58 to Invitca, LeSabre, Electra and top line Electra 225 in ‘59. As for Limited, the name would again surface in the 1980s as a trim option model on mid-size, front drive, Buicks.

Today a 1958 Buick Limited convertible will do over $100,000 in pristine condition at the major Mecum and Barrett-Jackson auctions. Thanks for you letter.

Q: Greg, my friend had a 1978 Volvo 262C Bertone back in the 1980s and he told me it was a special model and had a special engine. Can you tell me more abut this Volvo and what that Volvo is worth today? Thanks much, Mike L., Ithaca, N.Y.

A: Mike, that friend’s Volvo is a very rare car with some historic Volvo history.

The 1978 Volvo 262C Bertone was Volvo’s luxury car of the day and had some excellent suspension underpinnings. Under the hood sat a fuel-injected V6 engine known as a “PRV” engine. This engine was a joint developmental effort between Sweden-based Volvo and French carmakers Peugeot and Renault. The 140-horsepower engine is somewhat of an oddball being a 90-degree single overhead cam design that came hooked to an automatic transmission. Volvo tells me that the 262C body and interior was designed at Volvo in Sweden, but it was produced famous coachbuilder Turin in Bertone, Italy, thus the Bertone nomenclature.

In its heyday, the 262C Coupe was sometimes criticized by auto professionals for its boxy appearance. I disagree and feel the 262C Bertone is a unique Volvo, especially for the time period. During its production run from 1977 to 1981, only 6,622 were ever built, making it a rare find today.

Produced only in 2-door coupe trim, this Volvo Bertone cost $14,400 new, and hasn’t really turned into a collector classic even with its low production number. Today the 262c is listed at a low retail of $7,700, to a high of $21,100 by NADA Classic Car price guide.

Thanks for your question.

(Greg Zyla is a syndicated auto writer who welcomes reader input on collector cars, auto nostalgia or motorsports at greg@gregzyla.com.)

Be the first to comment on "Cars We Remember / Collector Car Corner; Tail fin frenzy, ’58 Buick Limited and a rare Volvo Bertone"