Action from the Vineland Speedway shows Elton Hildreth, far side, being inched out for a feature win by Richie Massing in the No. 15 in a 25-lap feature race back in 1959 on the half-mile oval. The author of this column is in the grandstands. (Vineland Times-Journal)

Q: Hi Greg, and I’m a fan of the old Vineland Speedway in New Jersey and I attended all of the same races you did back in the 1950s and 1960s. I see your hero driver back then on the oval track was the late, great Elton Hildreth, who won many modified stock car races there against some tough competition in his orange and black 16-J.

However, I am writing about Hildreth’s early day NASCAR racing, where he competed in a Nash on the racing circuit. He was a Nash dealer back then, so I understand why he would race a Nash. 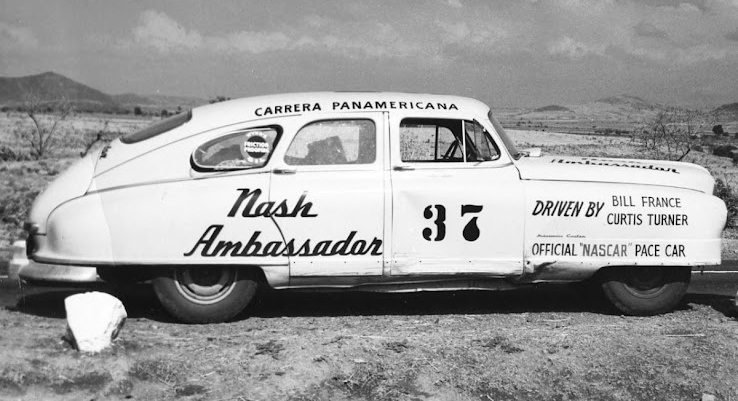 NASCAR founder Bill France and star race driver Curtis Turner drove this Nash to a third place finish at the 2,178-mile 1950 Carrera Panamericana across the Mexican road and countryside. The race allowed only strictly stock vehicles and featured 132 entries, including this Nash No. 37. It finished third after blowing a tire while leading 10-miles from the finish. Turner changed the tire, finished third, and then drove the corporate sponsored car in early NASCAR races. (NASCAR)

So, my questions are about Hildreth and Nash, and the car company’s early day NASCAR sponsorships. I really enjoy your old car columns, and I also want to know how Kelvinator ever got involved in the Nash car building company? I used to see the Nash cars used in the Superman TV shows in the Fifties, too. Bob S., now retired and living in upstate New York.

Elton Hildreth, the late great driver from Bridgeton, N.J., had an official Nash franchise that found him not only selling Nash cars in the early 1950s, he also raced the strictly stock Nash automobiles on the NASCAR circuit.

Notable is Nash being the first of the automobile companies to ever get involved with NASCAR, supplying cars for founder Bill France both on and off the track. Nash only won one official NASCAR race with Curtis Turner behind the wheel at the Charlotte Speedway .75-mile dirt track in 1951. Those who raced those early Nash racecars found that the engines overheated more so than not when competing on the many dirt tracks.

Hildreth, more than any other driver, was a Nash diehard, especially since he was also a Nash dealer. His best finish was a fourth at Bloomsburg, Pa. Fairgrounds back in 1953, where he won $350 for his efforts in the 200-lap race on the half-mile dirt track. Hildreth, who passed away in September of 2013, had a career in NASCAR from 1952 to 1957 encompassing 51 races where he had the aforementioned one top five and eight top tens in the underpowered Nash vehicles. He drove Mercury in his final year of 1957, where he ran just two of his total 53 NASCAR events. Other NASCAR early day Nash race drivers included Tim Flock, Eddie Anderson and Johnny Mantz, the latter who won the inaugural ’51 Darlington Southern 500 in a slow but steady ’51 Plymouth. 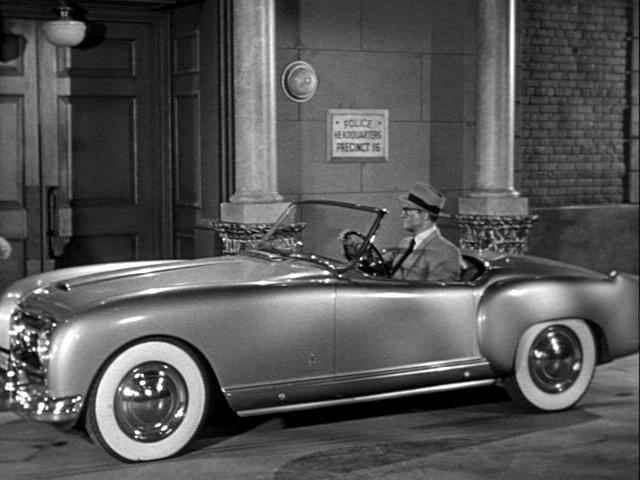 Clark Kent, a.k.a. Superman, arrives in style behind the wheel of his Nash Healey sports car in one of the many “Adventures of Superman” TV shows. (Nash-Kelvinator)

We’ll get to Superman a bit later, but as for your Kelvinator inquiry, it was a co-op partnership. Kelvinator was a maker of refrigerators and other refrigeration, and in 1936 Charles Nash was president and CEO of Nash Motors. He selected George W. Mason to be his successor, even though Mason was at the time president of the growing Kelvinator Corporation since 1926, and with no car building experience whatsoever.

Although Mason initially turned Nash’s employment offers down, Nash kept pursuing Mason until he finally gave in. Nash thus put together a merger with Kelvinator, forming the all-new Nash-Kelvinator Corporation.

Mason, it turns out, ended up a great car entrepreneur and marketing master, proving Nash correct all along about his choice to succeed him. Mason became the first to manufacturer American made compact cars, namely the Nash Rambler and Nash Metropolitan.

When the Indy 500 invited Mason to utilize a Nash as the official pace car in 1947, Mason drove the pace car himself much to the delight of the crowd. His riding partner that year was none other than Indy 500 winner Wilbur Shaw, and he also had actor and race fan Clarke Gable come over and pose for some publicity photos. Trivia? Nash was the first non-convertible to pace the Indy 500. 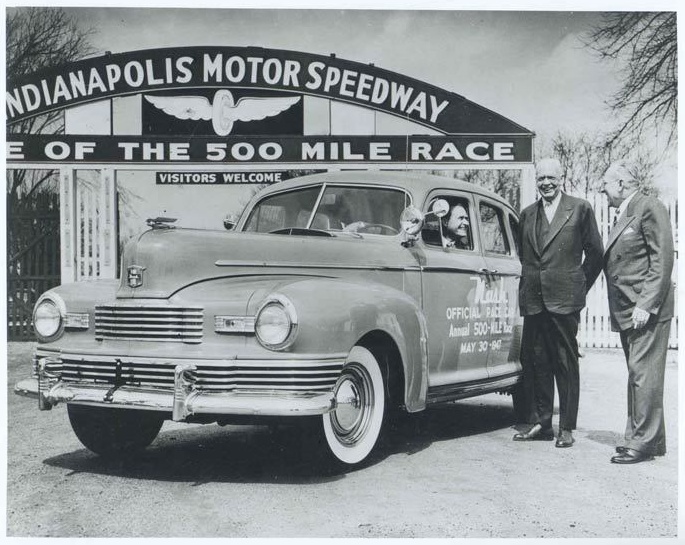 This Nash was one of the 18 cars given to officials at the Indy 500 for their use by George W. Mason, president of Nash-Kelvinator. At the 500 in 1947, a yellow Nash paced the field while a gigantic tent was erected displaying numerous new Nash automobiles for fans and corporate types. (Indianapolis Motor Speedway)

Mason also provided 18 Nash cars for Indy officials and a fleet of new Nash cars displayed in a large tent he erected for corporate entertainment and consumer information.

As for the Superman series, the mild-mannered reporter Clark Kent, a.k.a. Superman, did drive Nash cars in the shows, including a Nash-Healy two-seater. I, too, loved the show that ran from 1952 to 1958, and especially those great earlier episode Nash cars.

When watching Superman, it seemed whenever Inspector Henderson of the Metropolis police department arrived, it was a Nash that brought the actor to that part of the set. Additionally, co-star Lois Lane drove a Nash Rambler convertible, while photographer Jimmy Olsen sometimes arrived in a little Nash Metropolitan. The promo received was priceless for the growing auto company.

Sadly, Mason died suddenly on Oct. 8, 1954 following his successful negotiation of the merger of Nash and Hudson, which would then be called American Motors. Mentor George W. Romney, who would also go on to a successful career in politics as the Governor of Michigan for three terms, from 1962-1969, succeeded him. 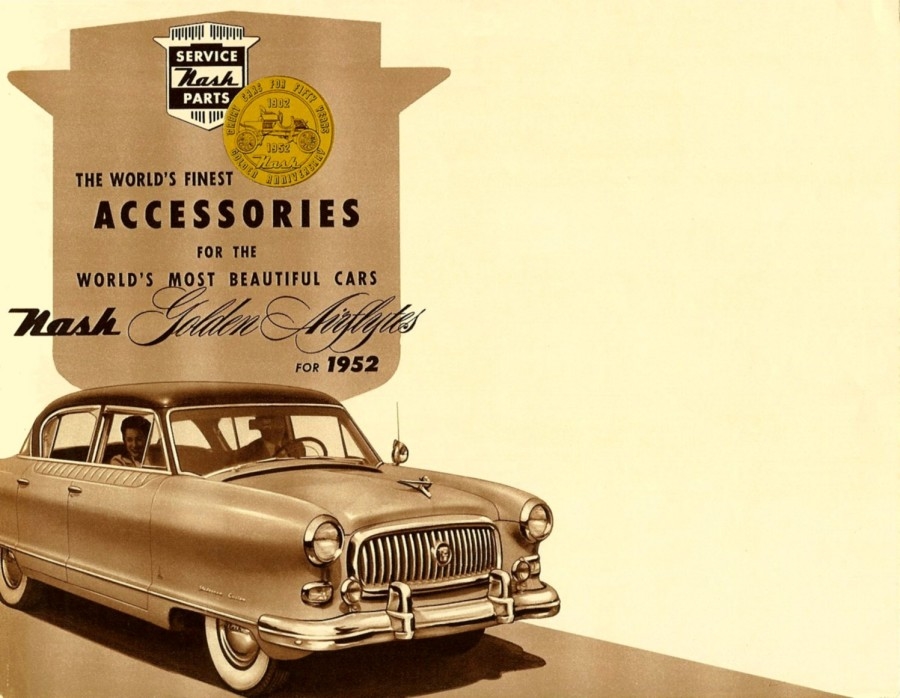 Color advertisement for the 1952 Nash Airflyte, a large vehicle that featured fold down seating. (Nash-Kelvinator)

As for all those great Nash cars, my personal favorites, in addition to the Nash-Healy that Superman drove, were the “bathtub” Nash Airflyte models from 1949-1950, when a total of over 300,000 of these cars were sold. These large cars offered seats that turned into full size beds with a flip of a few levers. Additionally, the 1951 and 1952 Statesman, Airflyte and Ambassadors are similarly nice. I also liked the 1954 Ambassador Custom, another Superman favorite from my recollection.

The last Nash to appear on an AMC build schedule came in 1957 ala the Nash Ambassador. Then AMC, with Romney at the helm, made the decision to drop the Hudson and Nash names in 1958.

Thanks for your question, and for reading my column.

(Greg Zyla is a syndicated auto columnist who welcomes questions on collector cars, auto nostalgia or motor racing at greg@gregzyla.com.)

Be the first to comment on "Collector Car Corner / Cars We Remember; Superman, Nash-Kelvinator, George Mason and my hero Elton Hildreth"