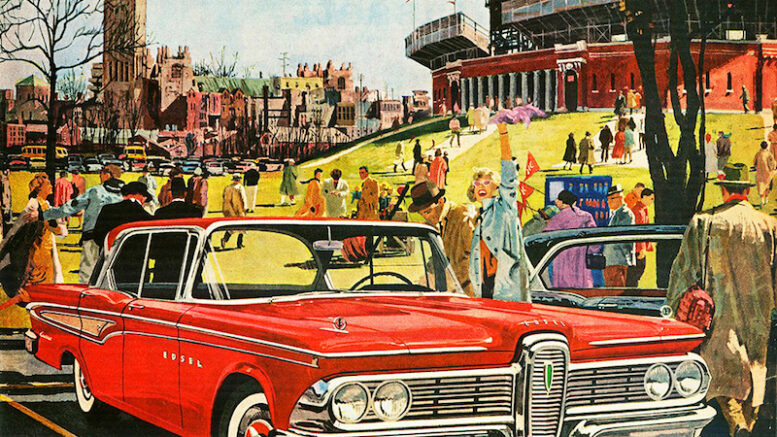 In its second year of 1959, the Edsel still featured the front nose “hangman’s noose: grille design, but sales were plummeting and rumors of the car’s demise were already in the automotive press. (Ford)

Q: Greg, I really like your old car columns and look for them each week. You’ve written a lot recently about Edsel Ford, so how about your feelings about the Edsel? It was a new car, but failed miserably. I remember all the hype back then as a teenager. Lynn S. from Montrose, Pa.

A: Lynn, I am happy to oblige. In my opinion, the 1958 to 1960 Edsels were pretty much a car of gimmicks and gadgets, with a new body design built on the usual Ford-Mercury underpinnings. In comparison to other “innovative” cars of that time period, the Edsel was similar to the “all-new” Studebaker Lark of 1959 in that the Lark was just a new body design on the same poor selling 1958 Studebaker chassis.

However, unlike the Edsel, the “new” ’59 Lark actually saved Studebaker from bankruptcy. These non-innovative upgrades were normal back then as all manufacturers partook in yearly exterior body enhancements that overshadowed any real mechanical and/or safety improvements. 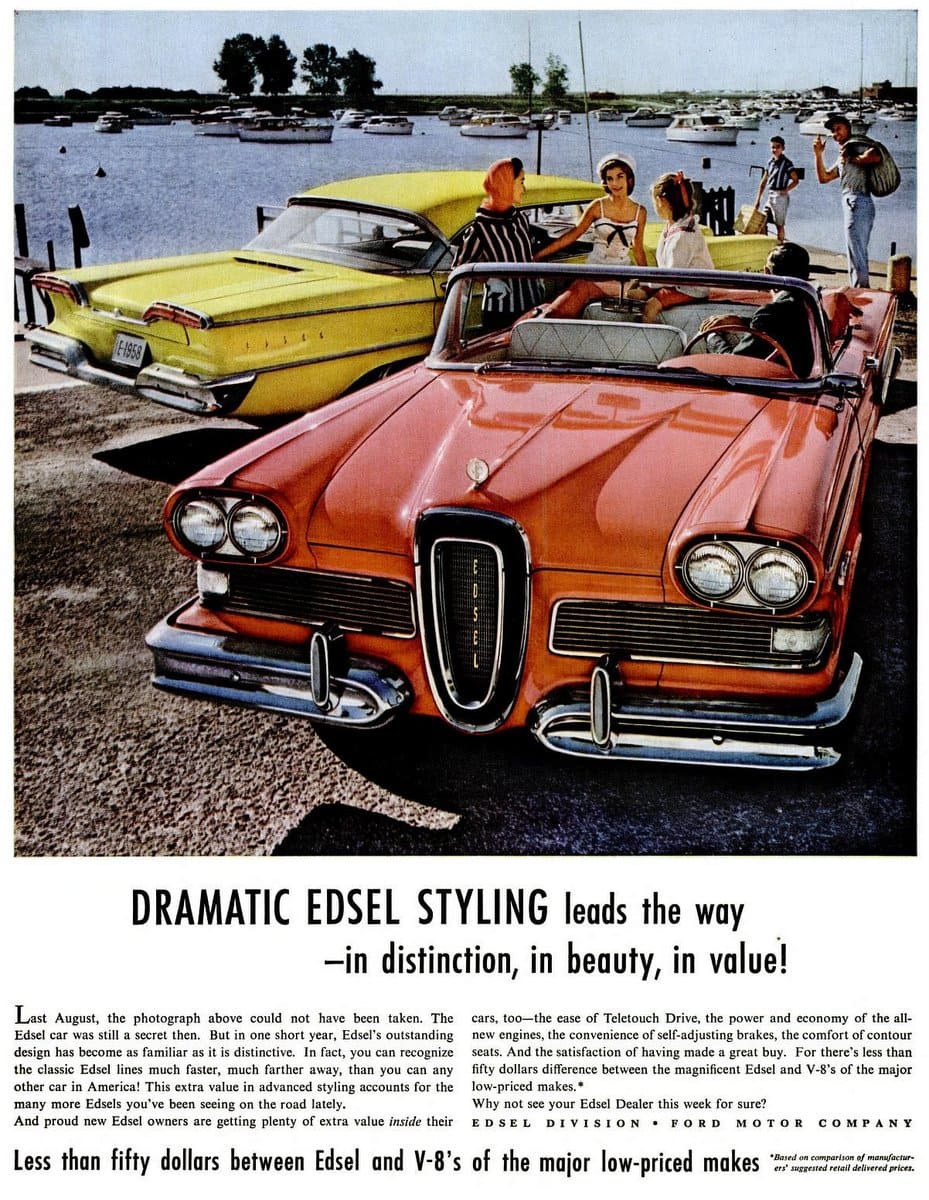 There was much hype about the all-new 1958 Edsel, including newspaper full-page ads, television commercials, billboards, and even an “Edsel TV Show.” Nothing worked, and the Edsel went down as one of the worst new car introduction failures of all-time. (Ford)

Edsel hoped to sell its new creation via slick advertising campaigns and the “new” Edsel gimmicks, like pushbutton transmission buttons in the center of the steering wheel and a rotary speedometer. The American consumer wasn’t sold by the design and gadgets, and saw right through the ad campaigns.

Still, there was so much hyped advertising about this car, including an Edsel TV Show that you thought something “out of this world” was coming to dealer showrooms. The Edsel Show debuted Oct. of 1957 and was a one-hour special hosted by Frank Sinatra, Bing Crosby, Louis Armstrong and Rosemary Clooney and aired on CBS in place of the Sunday night fixture The Ed Sullivan Show and the ratings were enormous.

When it appeared in late 1957 as a 1958 model, it was a bust from day one. Edsel’s outward design was more of an “in your face” statement and eventually disliked by consumers. Its “hangman’s noose” or “snorkel” front-end grille didn’t seem to match to what I feel was an otherwise a nicely styled motif, especially the trunk and rear headlight design. 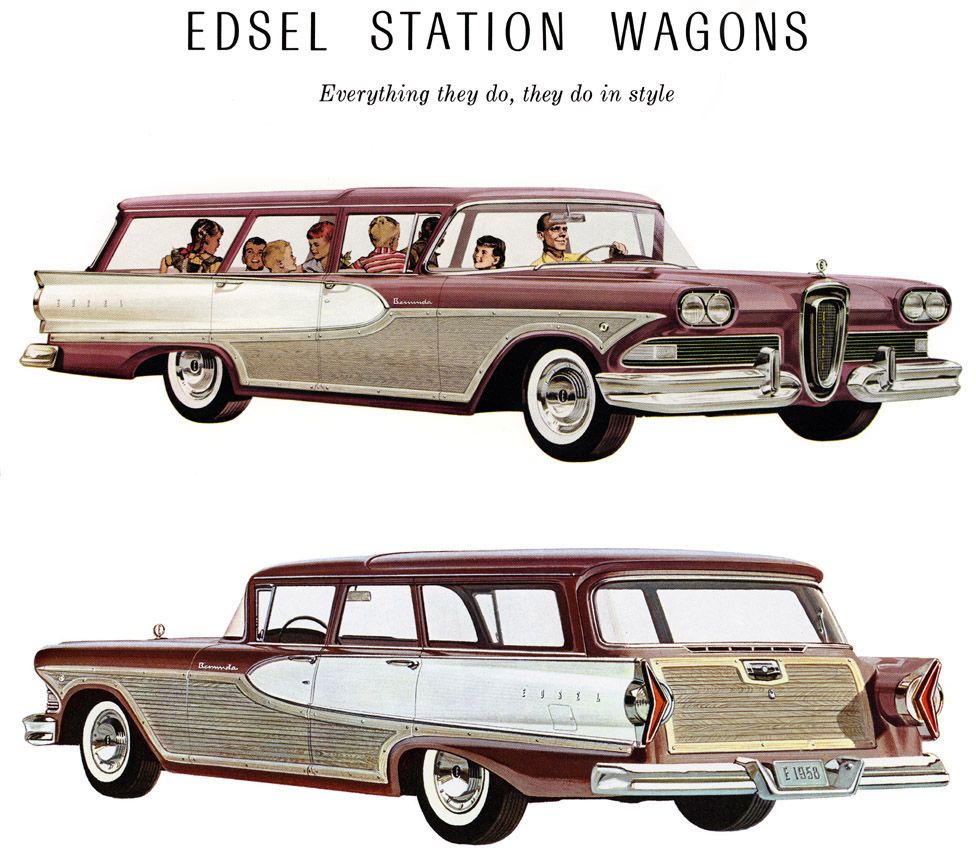 The Edsel station wagons, especially Bermuda and Villager, bring top dollars at auctions everywhere in good condition. The Edsel cars, however, are priced lower and are good buys right now in the collector car market. (Ford)

Another reason I feel the car failed was the name, Edsel. As you mention in your question, I’ve written about Edsel Ford, son of Henry Ford, extensively the last few years. In addition to his outstanding contributions to Ford and noted as an outstanding executive, his name just didn’t have a striking vernacular that the sibling Lincoln – Mercury – Ford cars of the day had. Examples include Thunderbird, Continental, Fairlane, Marauder, and so on.

Further, Henry Ford didn’t have the foresight that his son Edsel did. Sadly, Edsel Ford did not live long enough for his positive impact to continue and thrive. Born in November of 1893 and the sole child of parents Henry and Clara Ford, he grew up with all the cars and action around him and rose to President of Ford from 1919 until his untimely passing May 26, 1943. He was just 49 years old when he succumbed to stomach cancer following unsuccessful surgery. His father then reassumed the position as president of the company until he named Edsel’s son, Henry Ford II, president of Ford in September of 1945.

Edsel Ford’s death impacted so many organizations as he was one of the most significant art benefactors in Detroit history. Edsel also financed several exploratory expeditions, including the historic and famous flights of Admiral Richard Byrd over the North Pole starting in 1926. Byrd’s famous Antarctic expeditions were responsible for founding the Edsel Ford Range of Mountains, Ford Massif, Ford Nunataks, and Ford Peak.

Back to the car. 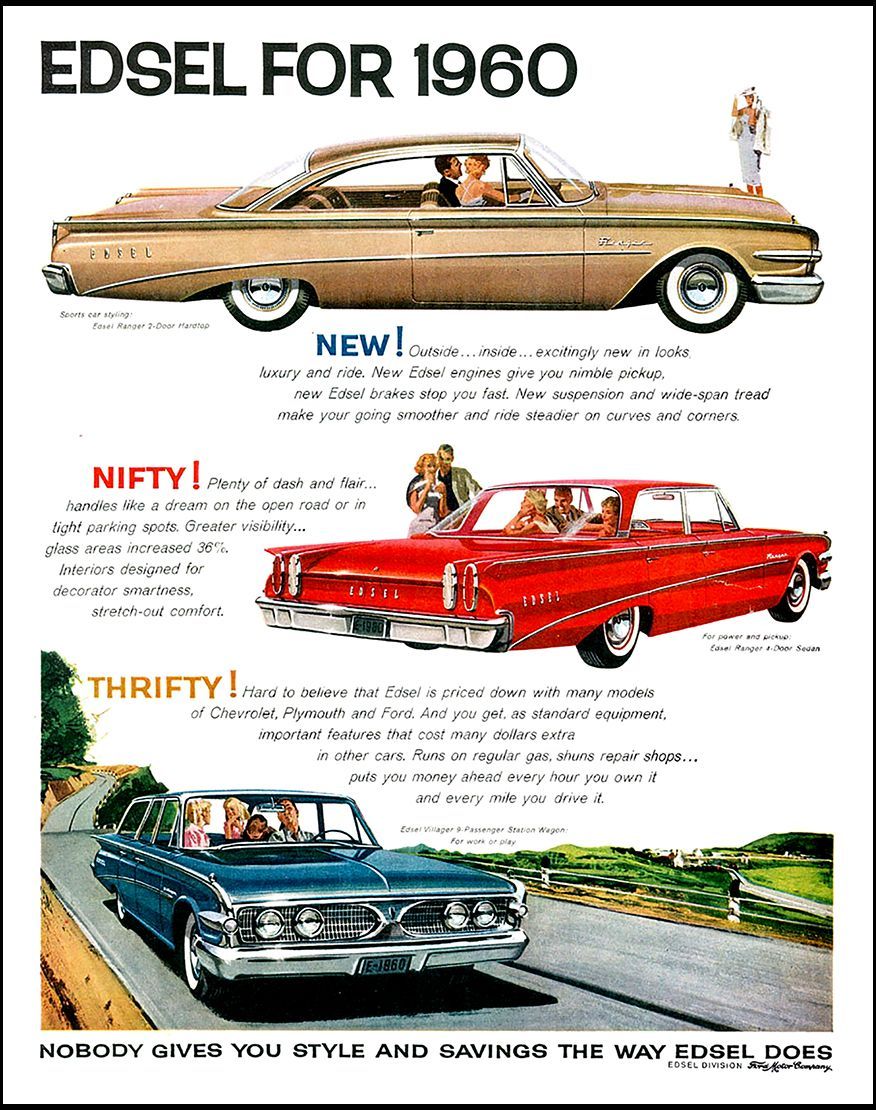 By 1960, the Edsel styling was replaced by Ford updates to the grilles and rear taillights. Other than that, the gimmicks were gone and by 1961, so was the Edsel. (Ford)

There were many internal problems associated with the naming of the new car, and many executives at Ford did not want the Edsel name on it. Add in the autoworkers union woes, and the car was doomed from the beginning. Case in point, Edsel was initially sold only at new Edsel only franchise dealerships, which didn’t last long following the April 1957 franchise signing agreements.

The Edsel eventually ended up at every Lincoln-Mercury dealer without having to purchase a special Edsel franchise, resulting in January of 1958 with the forming of the Mercury-Edsel-Lincoln (M-E-L) Division. Edsel’s poor initial sales forced this move and Ford hoped to enhance its Lincoln brand to that of GM’s Cadillac and Chrysler’s Imperial popularity with all three lines on the showroom floor. Edsel, meanwhile, would compete for the Oldsmobile – Pontiac – Dodge – Desoto consumer monies with hopes of increased sales. Unfortunately, none of this sales theory worked.

Further, union workers received no incentives to build the new Edsel, which pretty much appeared one day alongside their Mercury assembly line duties. Rumors of intentional “missed tightening bolts” on Edsels by frustrated union members resulted in early quality control woes. I know this for fact as my Uncle John worked for Mercury at its Metuchen and Mahwah, N.J. plants back then and was a member of the autoworkers union. He simply told me all of a sudden workers were building another car line in addition to regular duties with no incentives or employee discussions whatsoever.

As sales dropped, so did Edsel’s design upgrades, which were relegated to front end facelifts and rear taillight tweaks in 1959, and then a non-Edsel style and noticeable Ford body in its last year of 1960. When all was said and done, the one thing Edsel achieved from all of this was being labeled as the worst new car introduction and biggest sales flop in motoring history.

The only photo found of the 1958 Edsel of Paul Bass competing in the first ever Daytona 500 in 1959. Back then, the convertible division was allowed to compete with the hardtops in the Grand National races. (NASCAR)

As for me, I purchased a 1959 Edsel Ranger two-door in 2013, had it about five years and never really did anything with the car. When I sold it I lost money, as average condition Edsels just weren’t generating any real interest from serious collectors. Currently, prices are finally moving upwards as a ’59 Ranger two-door sedan is currently listed on NADA Classic Cars at a low of $6,200 in fair shape to an excellent condition example at $17,500.

When I see an Edsel nowadays at car shows, I’m still one of the first to go up and check it out proving that even a flop like the Edsel has enthusiasts. Most valuable these days are the station wagons when presented in excellent restored condition. The high retail for a 1958 Edsel Bermuda Wagon is currently listed at $113,500 on NADA. If it has the overdrive automatic and air conditioning, it lists for $120,675. I’d say that’s some serious cash.

As for trivia, in 1959 both an Edsel and a Studebaker Lark started in the first ever Daytona 500, which featured 59 starters. Paul Bass finished 46th in his ’58 Edsel while Harold Smith finished 31st in his ’59 Lark. Bass blew his engine while Smith was running at the end, but 41 laps behind. Bass ran an Edsel convertible, one of 20 ragtops that competed in the race.

Thanks for your letter Lynn and kind comments.

(Greg Zyla is a syndicated auto columnist who welcomes reader inquiries on collector cars, auto nostalgia and motorsports at greg@gregzyla.com.)

Be the first to comment on "Cars We Remember / Collector Car Corner; The 1958 to 1960 Edsel flop: gimmicks, name, union problems and design"