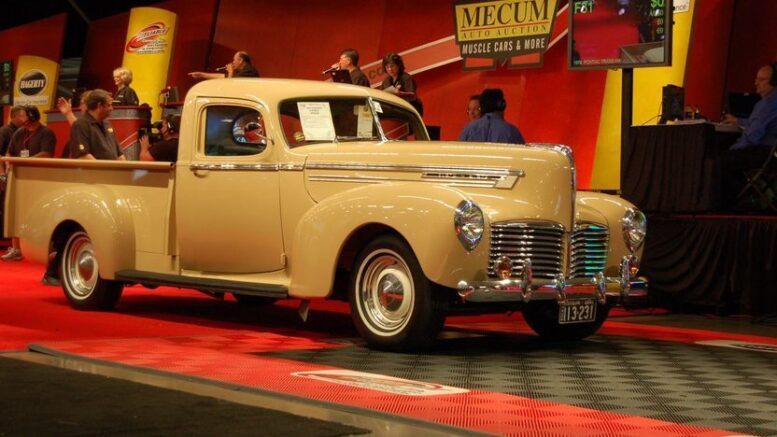 This 1941 Hudson Big Boy Pickup is built on the Hudson Commodore 128-inch wheelbase chassis. It was a feature vehicle at a past Mecum Auction and features a six-cylinder Twin H-Power engine with dual carbs and was in perfect condition. These trucks command top dollar these days and are listed by Hagerty Insurance guides as a $50,000-plus insurable collector truck. (Mecum Auctions)

We’re dealing again this week with letters from several readers and a letter from Shickshinny, Pa.’s Gahrad Harvey that included an article that appeared in the Bloomsburg Press Enterprise titled “Creasy’s Garage closes up shop.” This well written article, by M.J. Manon, details the Hudson Garage located in Scott Township, Pa. that has been the center of Hudson activity for decades. It all started when Frank Creasy opened the Old Berwick Road business in 1955, and when the local Hudson dealership closed in 1954.

If you lived in this area of Pennsylvania, owned a Hudson, and didn’t go to Frank Creasy’s Hudson Garage for service, you were in the minority.

Along the way, second generation owner and son Nelson took the reins in 1970 and then passed the torch to his son Tim, who operated the garage from 2000 until his recent retirement Jan. 1, 2022.

During the near 70 years of business history, Creasy’s Hudson Garage and the family collection of Hudson cars and trucks are, to this day, legendary and nationally recognized. Specifically, Nelson and his brother Larry and son Tim will all still be active in promoting their personal Hudson collection, along with their nationally respected Hudson Club events held yearly at the shop.

Advertisement for the 1946 Hudson Big Boy pickup, known as the Gentleman’s Truck and built on a Hudson car chassis. (Hudson Motor Company)

Creasy’s club events attract enthusiasts from all over the United States, and I want to wish all of the Creasy family members hearty congratulations on a job well done. The daily garage activities may be closed, but the Creasy love of the Hudson and the family Hudson activities will continue.

This week’s questions deal with the Hudson “car-like” pickups that pre-dated the other “car-like” pickups like the 1957 Ford Ranchero and 1959 Chevrolet El Camino. These vehicles were listed as pickups, yet built on a car or station wagon chassis instead of heavy duty, pickup specific underpinnings.

I once “christened” the 1957 Ford Ranchero as the first “car-like” pickup, resulting in a good amount of letters including those from Gabor Korthy, Augusta, Maine; Guy S. (Sam) Colorossi, Orting, Washington; and most recently Charles L., from Ithaca, N.Y. All noted that the 1941, 1942, and 1946 Hudson pickups were the first “car-like” pickups. Being that the Ford Ranchero appeared in 1957, Hudson was way ahead of everyone else by a full decade and a half.

Further, Albert K. from Spokane, Washington noted that perhaps the 1957 Dodge Sweptside was also a “car-like” truck model and should be recognized as such with the 1957 Ford Ranchero, but I’ll explain why it is not. 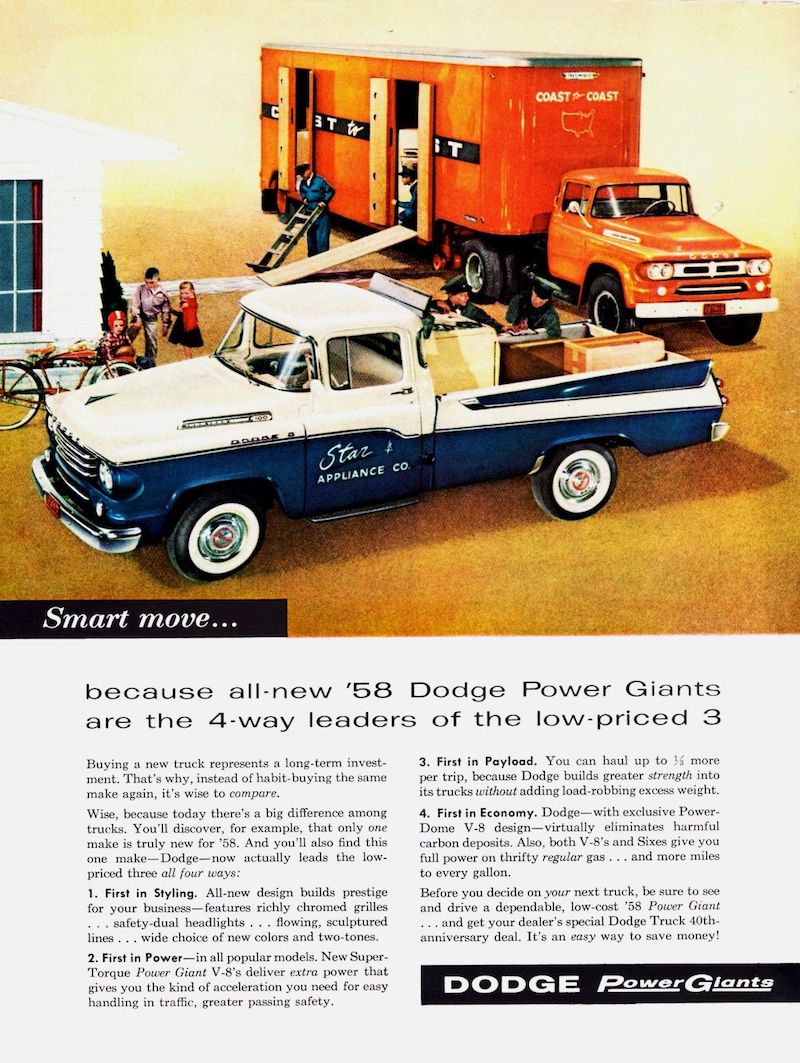 Advertisement for the 1958 Dodge Sweptside as a newspaper delivery pickup shows the big Dodge Tractor in the background. (Dodge Division)

Let’s remember that a “car-like pickup” MUST be built on a car specific chassis and include car-like amenities. This is important as in the 1950s decade, all the pickups I remember were more “farm truck” like work vehicles low on driver and passenger amenities but high on hauling and towing abilities, unlike the Ranchero and El Camino.

As for the 1941-1942 pre-war Hudson pickup, I’ll certainly give Hudson its’ just due as these pickups were available in both 116- and 128-inch wheelbase lengths and built on the Hudson Commodore automobile chassis.

Hudson’s total vehicle pre-war production was very good as 91,769 Hudsons were sold in 1941, followed by another 40,661 car and truck units in 1942. Production for 1942 was down due to the government mandate that stopped all commercial car/truck production from mid-1942 to 1945 to concentrate on the WWII effort. 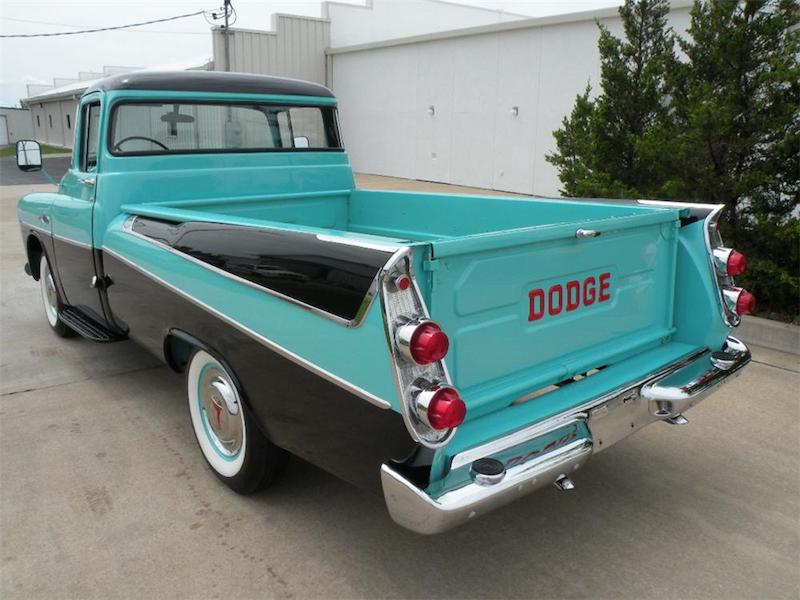 Here’s a better look at the rear design of the 1957 Dodge Sweptside pickups, which incorporated the station wagon side and rear components and many of the car touches, like chrome trim and two tone paint. These units are very rare nowadays, as only 1,200 were produced. (Mecum Auctions)

In 1946, car production resumed and Hudson offered just the long wheelbase Big Boy pickup along with its line of cars. Total Hudson sales went right back up to 95,000 units total.

Also, when compared to the Hudson cars of the 1940s era, the pickups look identical to the front-end car designs, so again I give Hudson an official “pat on the back” for being the first “car-like pickup” ever made. (Sorry for my miss to all Ranchero fans.)

These 1941 and 1942 Hudson Pick-ups were known as The Gentleman’s Pickup, and unlike other pickups of the day with floor shifters and drab interiors, Hudson’s Commodore influenced pickups included a “three on the tree” column shifter, independent front suspension, and other Commodore niceties. Values are impressive, as I’ve seen these ’41, ’42 and ’46 pickups in number one condition going for upwards of $65,000 at Mecum and Barrett-Jackson auctions. 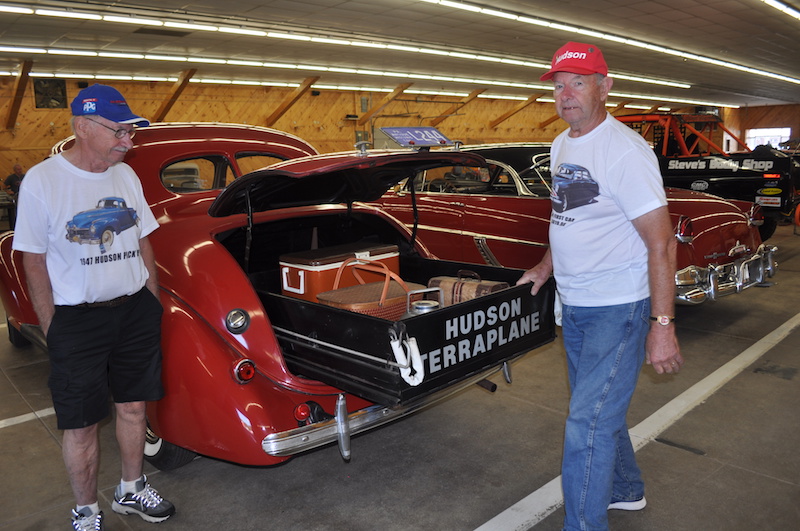 Nelson Creasy, right, along with his brother Larry, on the left, show how easy the 1937 Hudson Terraplane Utility trunk cart is to operate at a past Bloomsburg Nationals car show in Bloomsburg, Pa. The Creasy Garage recently announced its daily garage business closure, but the Hudson events the Creasy family is known for will continue. (Greg Zyla Photo)

Now onto that 1957 Dodge D-100 Sweptside, not to be confused with the more truck like designed 1959 Sweptline.

I’ve always felt Chrysler’s Sweptside bed design was accomplished to get this Dodge pickup to market as quick as possible. Clearly visible is the ’57 Dodge Station wagon’s two-door fender designs on the back half of the vehicle, meaning they lifted the station wagon fenders and taillights to possibly quicken delivery to dealers. However, the Dodge Sweptside was a pickup truck chassis from the start, utilizing Dodge’s long-bed truck cab chassis. This eliminates the ‘57 Dodge Sweptside from first “car-like” pickup considerations although most Sweptsides included many of its car design cues, like chrome trim and two-tone color schemes.

Through the years, this crossbreed Dodge Sweptside pickup has become a darling of pickup collectors thanks to its unique looks. Additionally, in 1957 Dodge used the D-series nomenclature for the first time, and two engines were available – a 230-inch, 120-horse flathead six, or a 315-inch, 204-horse V8. The D-200 and D-300 Dodge pickups had truck like design rear beds and they sold more than the D-100 Sweptside models.

The reason these Dodge Sweptsides are worth so much nowadays is these pickups with the station wagon fenders never really made it to the “official” Dodge truck mass production assembly line. Only 1,200 were built in ‘57 and ’58, and hand assembled when it came to the body. Some units came with a Powerdome Hemi V8 under the hood and a 3-speed pushbutton automatic. These special “Sweptside” pickups are currently listed under NADA Classic Car valuations from a low of $17,700 in rough shape to a high of $86,600 in perfect, restored condition. 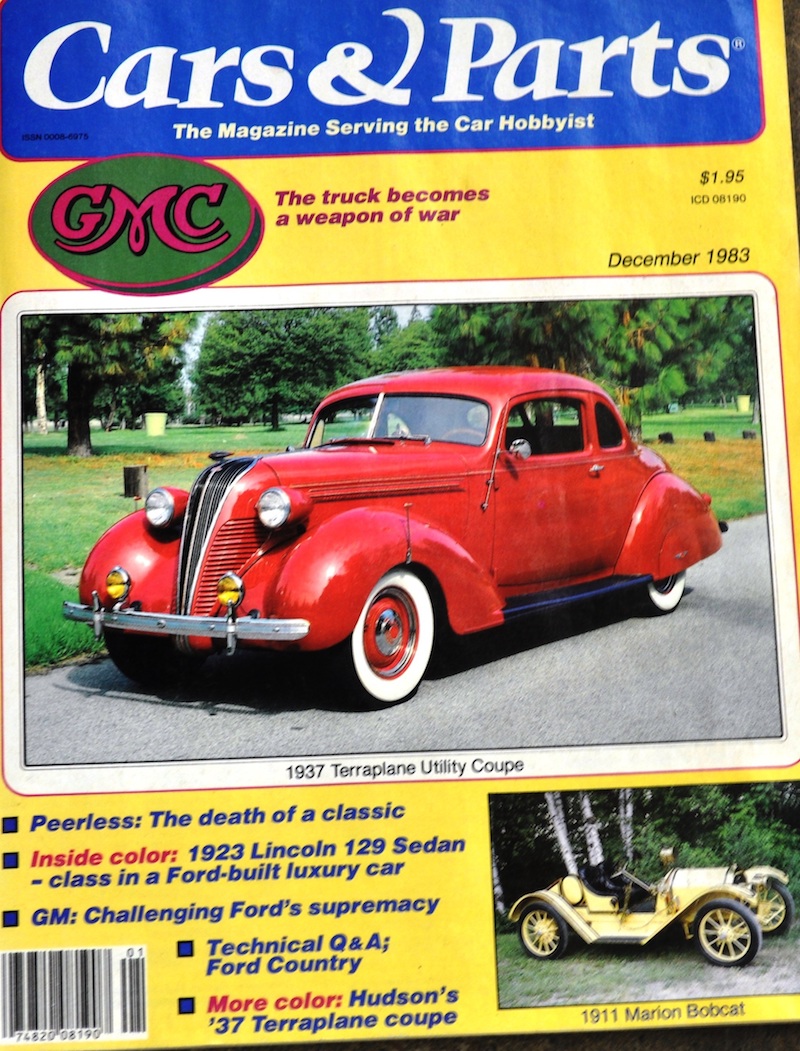 This “Cars & Parts” magazine from December of 1983 features Nelson Creasy’s 1937 Hudson Terraplane Utility Coupe on the front cover. Creasy noted he only paid $25 for the car when he purchased it many moons ago and restored it to its present glory. (Greg Zyla Photo)

That will do it for this week, and thanks to all the readers for their letters and congrats again to the Creasy family.

(Greg Zyla is a syndicated auto columnist who welcomes reader comments and input at greg@gregzyla.com or at 303 Roosevelt St., Sayre, Pa. 18840.)

Be the first to comment on "Cars We Remember / Collector Car Corner; More ‘car like’ pickups and nationally known Hudson Garage announces closure"