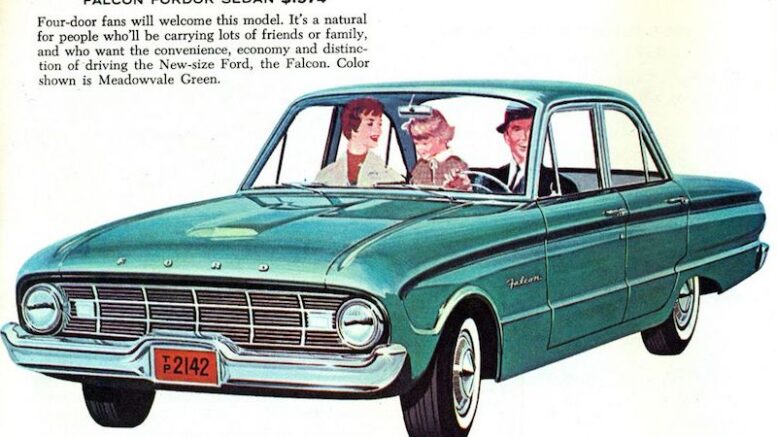 By 1960, the “Big 3” of Ford, General Motors and Chrysler joined the compact car boom with several models. The 1960 Ford Falcon is perhaps the best known of the initial models, debuting in October of 1959 and outselling the competition thanks to offering a sedan, station wagon and Ranchero pickup. Pricing for the sedan started at $1,974. (Ford Motor Company)

Q: Hi Greg, I enjoyed your ‘car firsts’ column I read recently. With car firsts in mind, what car do you feel was the first American compact car? There were many around in the Sixties, but there were several in the Fifties I remember. Thanks and keep up those great nostalgia car columns I enjoy every week. John S., Danville, Pa.

A: John, that’s always a tough one to answer as this question comes up a lot in my discussions with friends. More importantly, thanks for being a regular reader of my work. I appreciate it very much.

However, since you bring up my “firsts” column, I received several letters from readers pointing out I made a mistake on the “first automatic transmission” section, which I had listed as the 1948 Oldsmobile. Well, thanks to a “mis-strike” of keys, it appeared as the 1948 Olds and I just plain missed it when I did my final re-read. And to make matters worse, I even sent a photo of the ’48 Olds even though in my notes, I clearly had the 1940 info. So, for those papers that didn’t have time for the correction I sent out, I am including that correct photo and cutline in this column.

As for the first compact cars, I probably should give that honor to the Crosley line of cars, but I always looked at the Crosley as a “sub-compact” brand, so I’ll respectfully rule them out as I will also eliminate from this column the “mini-compact” King Midget, both built here in America and of which I’ve covered before in my columns.

I’ll also eliminate the American Austin, built in Butler, Pa. as a small car beginning in the 1929 and lasting only through 1937 with a few years off due to bankruptcy re-organization. However, the Austin was not really an American-based car design and was built “on loan” from the British Austin company using their parts during assembly. Ditto for the American Bantam, a sibling of American Austin although now using some original bodies and American-based parts and built from 1937 to 1941.

This all leads to my final compact car elimination, the popular Ford Anglia that was built both in Britain and Australia and sold millions of cars. Many appeared here in the states, and were scooped up by drag racers that installed V8 engines and entered them in the numerous classes of drag racing that exist to his day. Additionally, I mention the Bantam, Austin and Anglia more so to ward off letters from readers because back in the 1930s, numerous cars were of “compact” dimensions.

So, the above named cars are eliminated from any further discussion.

Now, since I’m pinned down as to a first new American compact car, I’d have to give my compact car “pat on the back” to two, not one, deserving efforts. 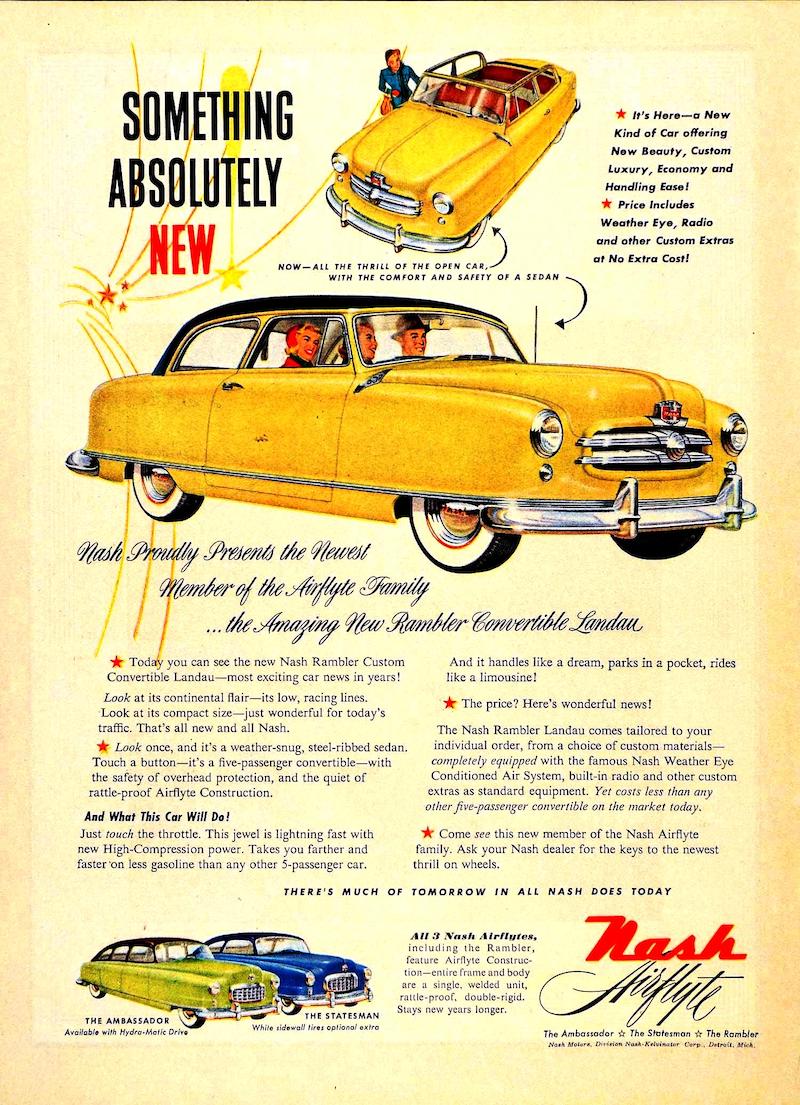 Here is the 1950 Nash Rambler, the first successful American built compact car. Only one style was available, a zip-top convertible that sold 11,000 its first year. When a station wagon and hardtop debuted in 1951, sales rocketed to over 50,000. (Former Nash Rambler)

First is the 1950 Nash Rambler. As mentioned before many times in my columns, the name George Mason again pops up as the nucleus for Nash Rambler’s success. Mason was always in full support of smaller American cars during his tenure as president of Nash, which he did so well after spearheading the merger of Nash automobiles with Kelvinator appliances back in 1937.

Following considerable promotion and advertising, the new 1950 Nash Rambler “zip top convertible” sold over 11,000 units its first year and over 50,000 the next thanks to expanding the line to include a station wagon and a hardtop.

The second compact to arrive on the scene at the same time was the 1950 Henry J, introduced in September of 1950 and sold through 1954. You could even buy a Henry J at Sears Roebuck stores with Allstate badges, Sears tires, Sears batteries, and other ancillary Sears items.

Industrialist Henry J. Kaiser (where the “Henry J” name came from) was the idea man behind this new compact, which was cheap and provided dependable transportation for post war families just getting on their feet. Kaiser felt he could sell a low on amenities base model new car to those who were on tight budgets. His sales theory, however, proved incorrect as after a decent start of 7,100 Henry J’s sold that first year, sales declined each year through 1954 when Kaiser finally pulled the plug.

The Henry J was the mastermind of Henry J. Kaiser, the noted industrialist, WWII ship builder and car manufacturer. His low priced Henry J was also one of the first compacts, but a stripped down version with a low price of just $1,300 brand new. Although it sold well its first year at 7,100 units, by 1954 the model was dropped due to low sales. (Kaiser-Frazer)

In comparison, the Nash Rambler was way more successful because it featured a convertible zip-down top with many standard features over and above Henry J’s bland offerings. The Nash Rambler later offered the aforementioned station wagon and a hardtop, leaving the Henry J way behind in the race to attract new customers. Prices in 1950 were $1,321 for the new, plain Jane, Henry J versus $1,800 for a nicely equipped Nash Rambler convertible. Even though $479 was a hefty sum back then, and in the inflated 2021 dollar equates to $5,286, what you got for the money in “automobile land” just couldn’t be compared.

Still, I give both the Nash Rambler and the Henry J kudos and thumbs up for compact car initiatives. Several manufacturers followed and by the early 1960s Ford Falcon, Plymouth Valiant, Mercury Comet, Dodge Lancer, and Chevy Corvair were ready for introductions. Still, the Nash Rambler and Henry J beat the “big-three” by a full decade.

Hope this all helps John and Happy New Year!

(Greg Zyla is a syndicated auto columnist who welcomes reader input on collector cars, auto nostalgia and motorsports at greg@gregzyla.com.) 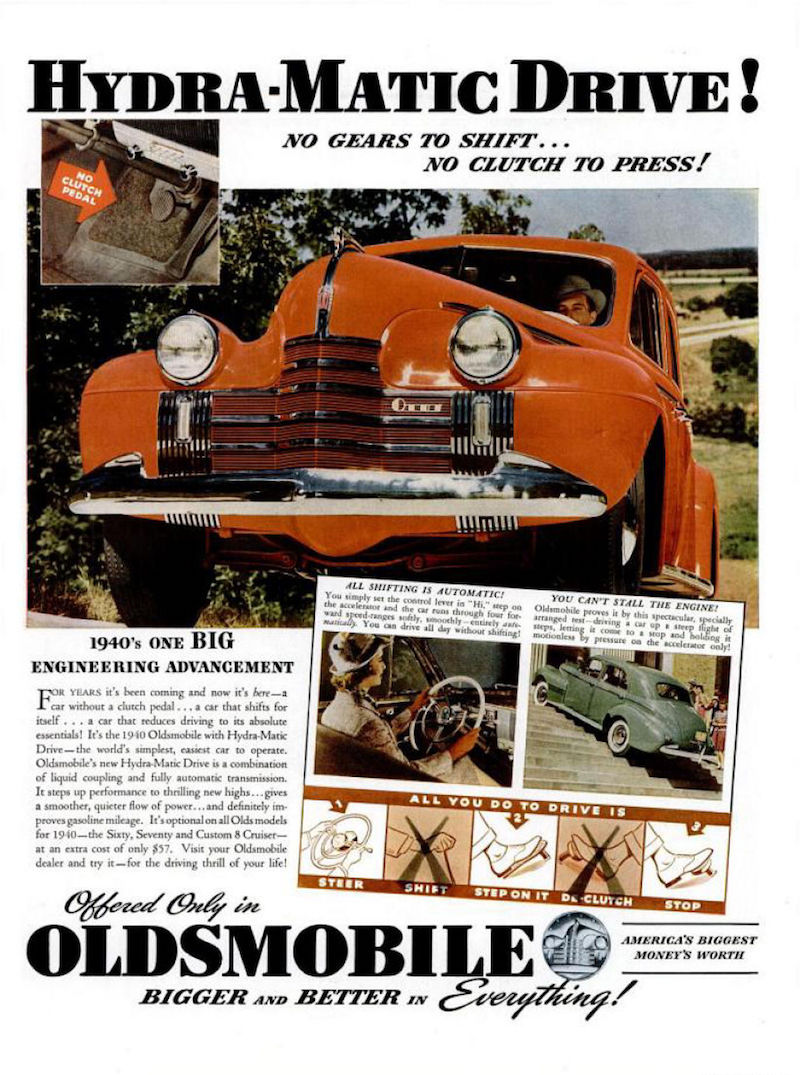 Corrected from our “Auto Firsts” column, it took until 1940 for a fully automatic transmission to appear in an American car as prior efforts included a clutch like assist to standard transmission shifting. The 1940 Oldsmobile receives credit for its HydraMatic, which it promoted as “Futuramic” in its advertising along the way. General Motors Engineer Earl Thompson developed and advertised the Hyrda-Matic as the “greatest advance since the self-starter.” Other manufacturers, including Hudson and Chrysler, worked with clutch style automatics but Olds had the first fully automatic. (General Motors)