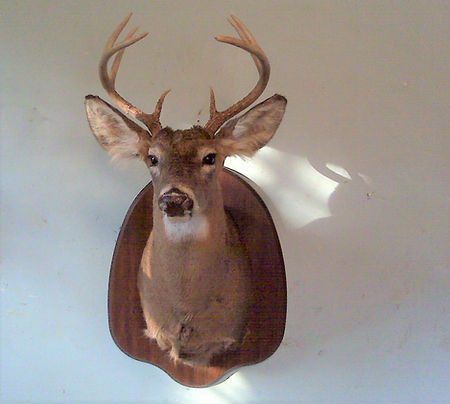 Tom Emms Taxidermy states that many conversations happen over a mount from a big hunt. Provided photo.

On the outer edge of Chemung County, Tom Emms Taxidermy has been a mainstay for members of the Southern Tier community looking to commemorate a memorable hunt. After almost 50 years of working as a taxidermist, first with his father and then on his own, Tom Emms has absolutely no intention of slowing down any time soon.

“Taxidermy is an art form and a craft, and If anything I am looking to expand, which is why I have been focusing more on the Owego area and Pennsylvania,” said Emms.

Mostly working with deer, Emms said that prevalence has more to do with what his customers want than what he is personally interested in.

“I love working with all animals,” said Emms.

As a small business owner in a small town that works within a craft that is no longer as popular as it once was, Emms said the nature of his business has merely evolved and has not gotten worse over the years.

With today’s hunters, the sport is no longer about just gathering with friends in some old clothes with your grandfather’s hunting rifle.

“These guys have trail cams, they spend hundreds of dollars on hunting attire, and they carry the best and newest hunting rifles and shotguns; they read books and research, and go online to watch videos,” said Emms.

The prevalence of social media and hunting tutorials on places like YouTube has made it easier for these hunters to connect with one another while making the sport more accessible to those who want to get into it.

“They are talking about game on the level of food plots and game trails,” said Emms, adding, “Young hunters today have a lot of money invested; so yes, there is not the same amount of young hunters, but they are much more educated.”

While Emms said he is dedicated to his craft and loves the art of taxidermy, the thing that has kept him working at it for most of his life has been the people he has met along the way.

“I love meeting people, I love talking to hunters and hearing their stories; I love the camaraderie of it all as much as I love the connection to nature and the outdoors,” said Emms.

Once the service is done, the personal connection that many customers feel to the product is almost tangible. In a sense, Emms said he isn’t just creating something for the customer, but an heirloom for future family members.

He added, “That piece of game you have on the wall you will have for the rest of your life. You will be able to recreate that day, thinking about how cold it was, who was out there with you, whether it was your father or uncle and maybe those people aren’t around anymore. You can even remember what you had for lunch today. It’s a gateway to a treasured memory.”

Be the first to comment on "Preserving a treasured memory"