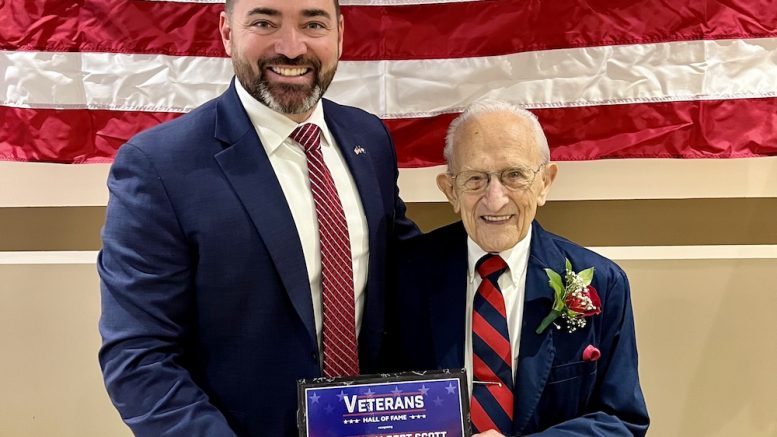 Major Richard Albert Scott, USAAC United States Army Air Corps, resides in Johnson City at the age of 97, the same city where he was born and raised. Medals earned during his military career include the Distinguished Flying Cross, the Air Medal, a Presidential Unit Citation, the European-African-Middle Eastern Campaign Medal, a WWII Victory Medal, the Air Force Longevity Service Award, and the Armed Forces Reserves Medal.

Richard Scott enlisted in the United States Army Air Corps at the age of 18 in 1942. Being too light to pass the physical, the doctors told him to drink lots of water and report back at noon to be weighed. Once inducted into the Air Corps, Scott discovered he was too short to be trained as a pilot and instead pursued training as a bombardier and navigator. Less than a month after marrying his high school sweetheart, June Burge, Scott received orders to deploy to Italy.

Scott survived 16 bombing missions as part of the 15th Air Force, including one perilous mission during which his B-24 Liberator was shot down over enemy territory in the Austrian Alps by anti-aircraft guns. Any chance at a safe landing was prevented by the plane’s bomb bay doors, which were unable to close due to extensive damage from enemy fire.

At an altitude of 20,000 ft., without a parachute, and with nothing between him and the ground but a 9-inch-wide catwalk, Scott heroically crawled on his belly across the narrow sheet of steel to reach the manual crank and close the bomb bay doors, effectively slowing his plane’s descent and allowing his crew to guide the plane to an emergency landing on a small British-controlled runway in Northern Italy. Scott’s exemplary act of heroism earned him the Distinguished Flying Cross.

After World War II, Mr. Scott served an additional 17 years in the United States Air Force Reserves, achieving the rank of Major. He worked for 45 years at Marine Midland Bank before starting his own business, Foreign Currency Mart. After 28 years working in foreign currency exchange, he retired at age 90.

A true American Hero, Richard A. Scott is proudly named to the New York State Veterans Hall of Fame by Senator Fred Akshar.