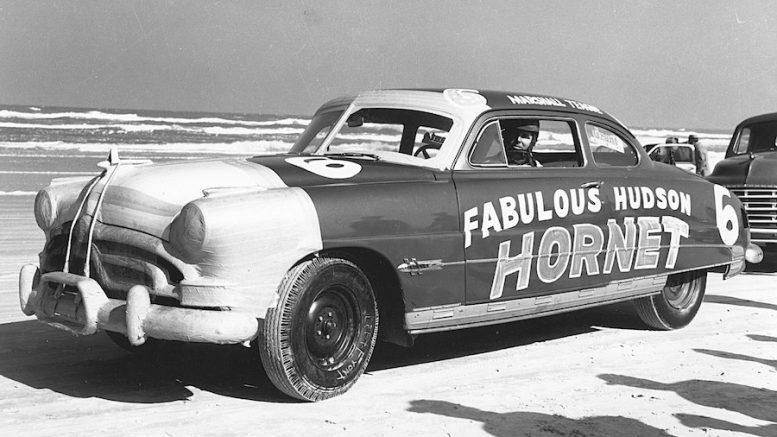 Q: Greg, at one time my father owned a Hudson Terraplane and my mother loved that car. If I’m not mistaken, that was the car that Sonny in the Godfather movie got “bullet ridden” in.

The Terraplane was a car brand and model built by the Hudson Motor Car Company in Detroit, Michigan between 1932 and 1938. In its maiden year the car was branded the Essex-Terraplane, but in 1934 the car became simply the Terraplane. They were inexpensive yet powerful vehicles that were available in both car and truck trim. 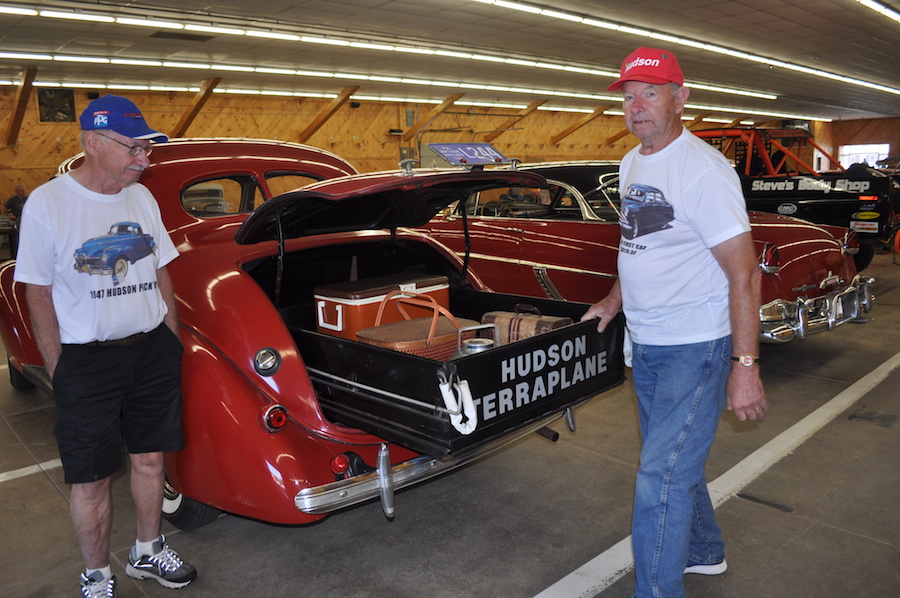 Nelson Creasy, right, along with his brother Larry, left, show how easy the 1937 Hudson Terraplane Utility trunk cart is to operate at the 2019 Bloomsburg Nationals car show in Bloomsburg, Pa. These Utility Coupes were popular back in the late 1930s. (Greg Zyla Photo)

The 1933 Terraplane 8-cylinder cars were believed to have the highest horsepower to weight ratio of any production automobile in the world. These cars were favored by several gangsters of the day, particularly John Dillinger, Baby Face Nelson and Dillinger gang member John Paul Chase. They all admired the car’s light weight, acceleration, handling, and discreet appearance.

Greg, what other Hudsons rate high on your list of memories? I’m sure you’ll mention NASCAR as they were big winners early on in the sport’s history. Thanks Greg, sincerely Bill Nish, Clarks Summit, Pa.

A: Bill, Hudson in my opinion was the most successful of the independent, non “Big Three” brands from Chrysler, Ford and General Motors. Hudson sold some of the fastest and best built cars in its 48 years of manufacturing. Hudson was number three in sales behind Ford and Chevy in 1925, proving its popularity.

Founded in 1909, Hudson was popular with the working class, blue collar America. The company was most successful with its inline 6-cylinder engines, even though Hudson’s first straight-8 appeared in 1930. Although the inline-8 engine was smaller than the 6-cylinder engine it replaced, it was not as reliable and was the only engine Hudson offered through 1932. In 1933, Hudson re-introduced a new inline-6 to join the 8-cylinder Hudson engine, which was now improved.

In 1953, Hudson did away with the straight-8. Its popular 1953 Super Wasp, which listed for $2,450 new in 4-door sedan trim, now came with a 232-inch 6-cylinder engine. Hudson merged with Nash-Kelvinator to form American Motors in 1954, and in 1955 the first ever Hudson V8 became available in the Hornet line. Sadly, Hudson lost its name identity after the 1957 model year due to the AMC merger and promotion of the Rambler names.

On the race tracks, the most famous of the performance Hudsons was the 308-inch 6–cylinder “racing” versions prepped by Smokey Yunick that allowed race drivers like Marshall Teague to win 12 of 13 scheduled 1952 AAA stock car races in his Hornet. Teague also scored Hudson’s very first NASCAR win when he took the checkered flag at the 1951 NASCAR Daytona Beach race. In addition to Teague, who gave the Hudson the “Fabulous Hudson Hornet” moniker, several drivers including Herb Thomas, Dick Rathmann, brothers Tim and Fonty Flock, Frank Mundy, Jack McGrath, and Al Keller scored 27 wins in ’52, 21 in ’53 and 17 in ’54. Overall, Hudson scored 80 total NASCAR wins, its last in 1955.

These racing Hudsons featured a “Twin H-Power” performance package that included dual carbs, dual exhaust, higher compressions, bigger cam, and so on. Teague and Hudson’s main engineer, Vince Piggins, developed the racing engine that produced 75 more horsepower than stock. Yunick, meanwhile, did his magic to add even more horsepower and they really were fabulous. Sadly, Teague was killed at the new Daytona International Speedway in 1959 trying to set a speed record in an Indy Car to get back into the good graces of NASCAR, which had suspended him for competing in other series races.

Now on to the Hudson Terraplane.

Being that the Terraplane was a popular Hudson lower-priced trim model, I wrote about one owned by noted Hudson collector Nelson Creasy from Bloomsburg, Pa. His Terraplane featured its novel and miniature roll-out truck bed called the Terraplane Utility Coupe. 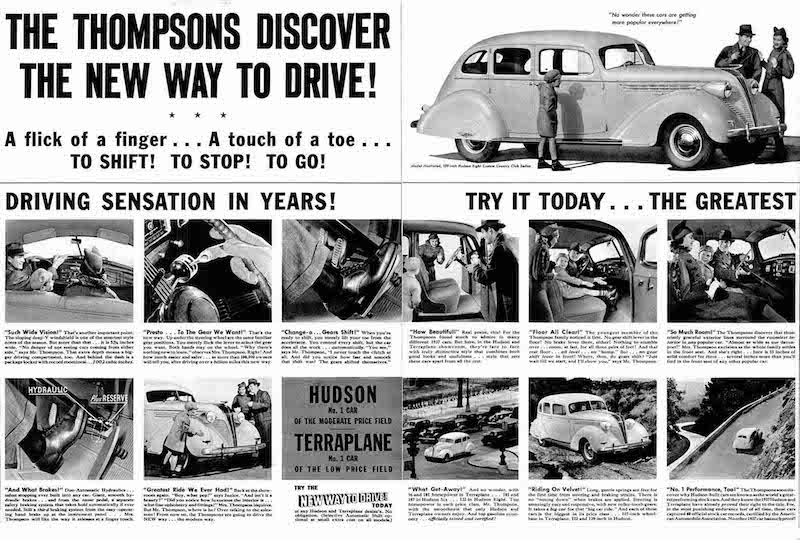 The 1937 Hudson Terraplane came in coupe and sedan trims. Explained are many of Hudson’s futuristic offerings, like “Electric Hand” transmission, which was actually an innovation that worked the clutch automatically instead of the driver using their left foot. (Compliments Hudson)

The “utility” part of the car is the roll-out trunk cart that Nelson and his brother Larry demonstrated at the Bloomsburg Nationals car show. The cart was packed with picnic items and a large cooler.

The brothers explained that back then, be it a picnic, a family vacation or a day at work, the roll-out made it easy to access items that sat further back in large trunk.

Further, I can’t end this column without featuring bits of a letter I received back in 2012 from Marge Kast from Wheaton, Illinois. The daughter of a Hudson salesman and mechanic, her letter explains how modern these Hudson vehicles were back in the 1930s.

“Greg, you incurred some of my best childhood memories when reading the history of the Hudson car company! My dad sold and repaired Hudsons in the 1930’s and we loved those cars. My dad had a new Hudson every three years and I even learned to drive in that big boat (at first it felt as if I was driving a truck). Dad made driving the Hudsons look so easy, and he insisted I learn the clutch and manual shift. When I mastered that, dad let me “push the button” on the “Electric Hand,” which activated the automatic transmission function on the 1937 Hudson. As a driver with the automatic, I was really living.”

(Author note: The automatic Marge mentions was called the “Electric Hand” and was a predecessor to fully automatic transmissions. Introduced in 1935 and utilized through 1938, the Electric Hand was actually a Bendix designed vacuum operated clutch, with a “Hill Holder” that locked the brakes on a hill so the car wouldn’t go backwards. See advertisement attached.) 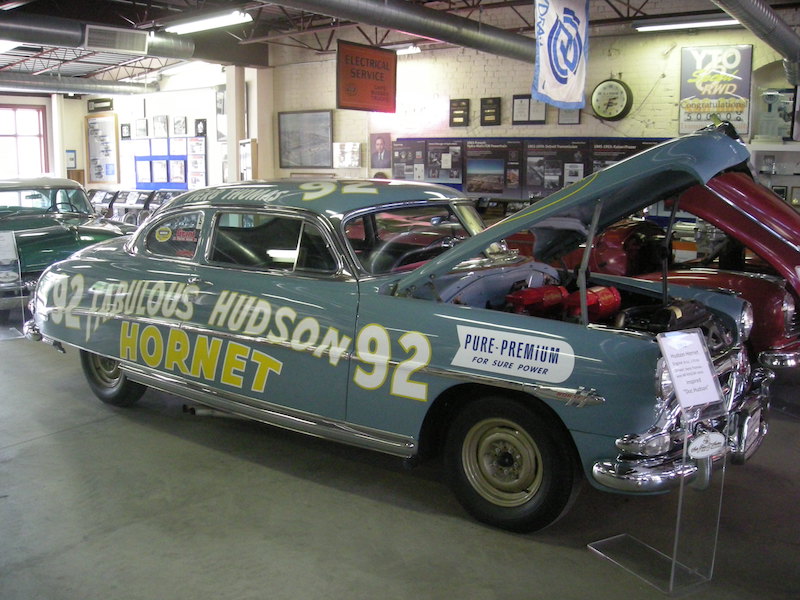 This restored 1952 “Fabulous Hudson Hornet” driven by Marshall Teague is on display at the Ypsilanti Auto Heritage Museum in Michigan. (Compliments Ypsilanti Museum)

Marge continues, “When I married and had children, all our cars were Hudsons, purchased used and always checked out and approved by dad. Our last one had to be towed away, but not because it no longer ran. It was towed because the floor boards were rotted yet the motor still purred. When the tow truck left with our Hudson, my husband and I felt as if one of our children had been taken away. (Silly, yes, but the love of those cars was born in me.)

“To this day I still love to drive (Marge was 80 when she wrote to me), and I still make road-trips in the Colorado, Kansas, and Tennessee areas. Driving is a calming and pleasurable experience for me, only I wish I had one of the Hudsons of yesteryear with the automatic transmission.

“I have an original Hudson Terraplane letterhead  that dad used as a comparison of which model to buy: Model 73 Hudson Custom vs. Model 74 Hudson Deluxe with all the specs: weight, horse power, prices, and even the option of a 3-way hot water heater and defroster unit for $21.65, plus 65-cents tax, totaling $22.30. Now, how great is that?”  It was signed, Marge Kast, Wheaton, Illinois.

Between Bill, Marge and Nelson and my racing tidbits, I’m hoping we all answered a lot of Hudson questions readers might have had. Thanks everyone.

(Greg Zyla is a syndicated auto columnist who welcomes reader input on auto nostalgia, collector cars and motorsports at greg@gregzyla.com or at 303 Roosevelt St., Sayre, Pa. 18840.)

Be the first to comment on "Cars We Remember / Collector Car Corner; Three Hudson enthusiasts combine memories for nostalgic recall"