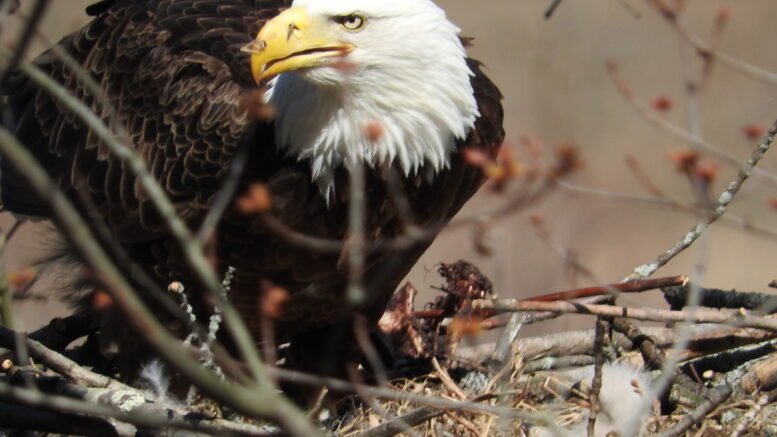 This majestic bird prepares to feed one of its babies, who can be seen in the bottom right portion of the photo. With a gentle, yet silent click of my zoom camera, I was able to capture a photo of this equally curious eagle as it tended to its young. The nest is located just south of what is called the Valley proper. (Photo by Wendy Post)

As a resident of the area for many years, and originally from Rochester, N.Y., there is one thing in life that I have never had the opportunity to photograph, and that’s an eagle. Oh, they’re around now and then, and I had one in my neighborhood for a short time a few years back that would make an appearance; but I’ve never seen one close up.

The last week of March was filled with reflection and hope as the rollout of vaccines and the slight lifting of restrictions was making life seem, well, a bit normal again. And let’s face it; a year filled with so much sickness, death and violence has affected almost everyone, at every level.

For this news writer and photographer, the pandemic created too many challenges to list last year; and as they say, no rest for the weary – at least not in the media industry.

For this writer, taking a drive usually renews my thoughts; it takes me away from cell phones and computers; it opens up the world and I can become in tune with nature and the world around me.

That is exactly what I did last week as I acted on a bit of a news tip. It had been rumored that an Eagle’s nest was visible along an area known as the Ulster Narrows, located just south of the Valley proper. It sounds complicated, but it’s not. It’s just down Route 220 and outside of Sayre and Athens, Pa., heading towards Towanda.

It wasn’t hard to spot as several photographers were already lined up near the guardrail, cameras and zoom lenses in hand, to capture a photo of this family of eagles. Most of the photographers were wearing camouflage, and there wasn’t a sound except for the traffic that often barrels down Route 220.

Camera in hand, I found a pull off along the highway and began my trek uphill and along the guardrail to get a glimpse of these majestic birds. I can honestly say that in all of my years I have never had an encounter that was as up close and personal as this one was.

Approaching the small group of photographers already on hand, I felt a bit of excitement as I prepared to zoom in on the eagle’s nest and get a glimpse of these majestic birds of prey.

Walking carefully along the bank and next to the guardrail on Route 220, I soon positioned myself and with my zoom was able to locate the nest and zoom in on the eagle.

I watched as the adult eagle moved back and forth in the nest; breaking up a piece of food foraged from down below for her babies. The eagle was not disturbed by the clicking of the camera or the traffic, and remained focused on getting the small brood fed.

I later discovered, from the photo, what looked like debris, or glass protruding from the eagle’s beak. I quickly learned, however, that these are natural and are like fingernails – something the eagle might use to tear apart its food.

Now I can’t wait to learn more, and I might have time! According to a Morning Times article that ran on March 30, eagles are no strangers to the Valley area.

According to the article, three photographers – Jim Cole of Milan, Pa.; Jim Conforti of Towanda, Pa.; and Rich Damian of Athens, Pa. have spent a lot of time capturing images of birds of prey, and have actually become friends through their love of photography.

All three have photographed the eagles that have returned over the years, and agree that there is an increase in their number, as well.

“There were 12 juvenile eagles along the river [last summer],” said Damian to Erik Berggren, reporter with The Morning Times.

He also added that growing up in The Valley he never saw an eagle; so the experience to photograph them, which all agreed, is one that keeps bringing them together.

While I was at the highway location of the nest, things were very quiet, as we didn’t want to disturb the eagles or their nest. A gentleman with a British accent was just leaving upon my arrival, and quietly said, “I’m from England.”

Another gentleman, who carried camera gear and a cell phone, said to me, “Look at this,” as he shared an image from his cell phone screen. Sitting perfectly, head up, mouth open, one of the babies was grabbing a snack from mom, or dad.

Another photographer, who was gearing up for a shot at the eagle, cautioned me as I navigated my way to the watch post, of sorts. And as I got closer, I saw it!

To get a closer view, I used my zoom lens on my camera, watching the eagle and its every movement. I was transfixed, I couldn’t stop watching it, and I wondered if it would fly for me, I wondered if the eagle knew I was there. 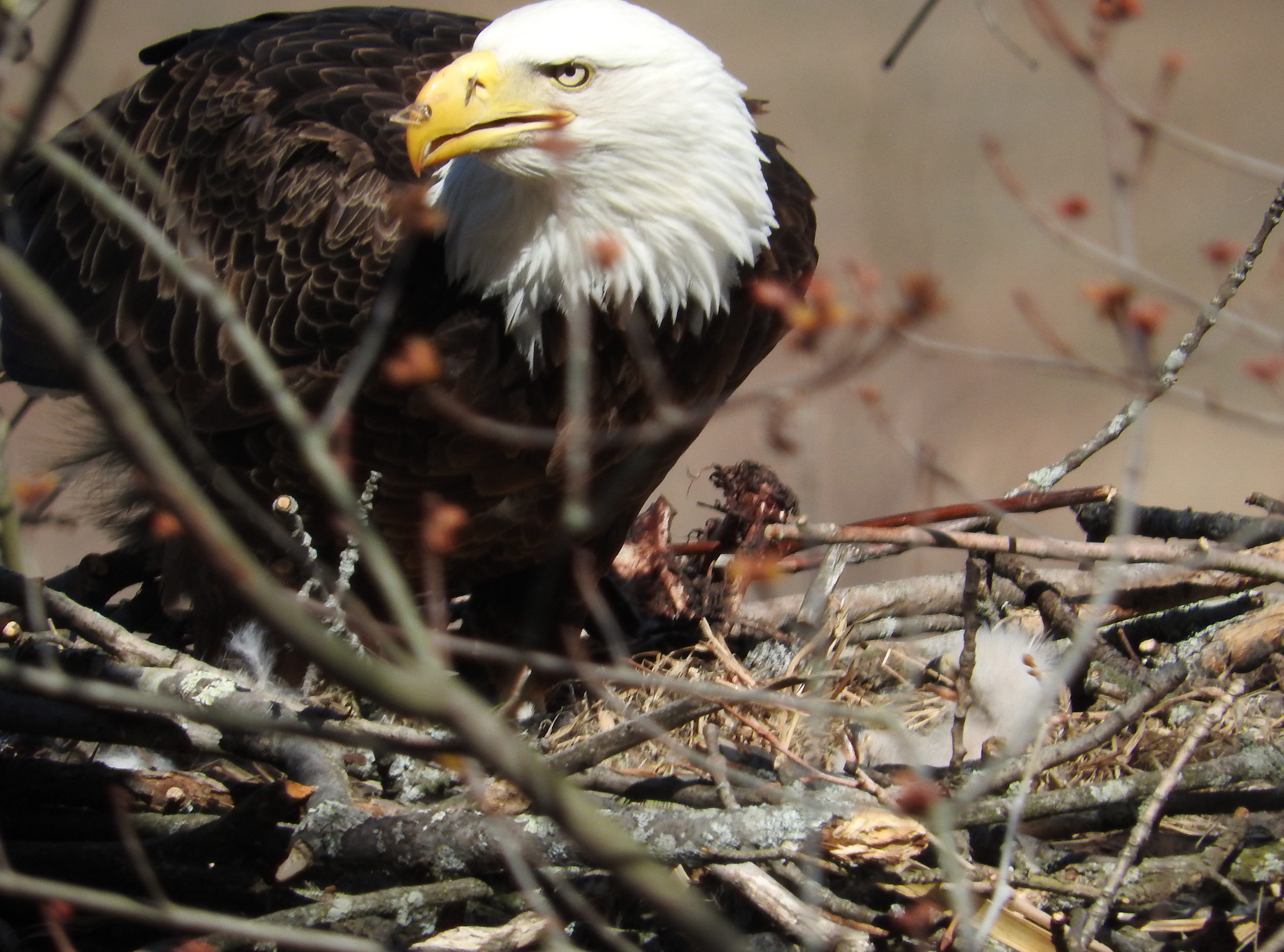 This majestic bird prepares to feed one of its babies, who can be seen in the bottom right portion of the photo. With a gentle, yet silent click of my zoom camera, I was able to capture a photo of this equally curious eagle as it tended to its young. The nest is located just south of what is called the Valley proper. (Photo by Wendy Post)

As it always does, my camera came through for me and captured several beautiful shots of the eagle; it wasn’t until later, and when I arrived home to process the photos, that I noticed the head of the baby in one of the shots.

I was so excited!

Growing up in Rochester, N.Y., and like Damian, I never saw an eagle; so this photo opportunity for me was the shot of a lifetime; an opportunity that may just spark a new hobby.

In Native American culture, eagles represent honesty, truth, majesty, strength, courage, wisdom, power and freedom; it is no wonder that their presence brought me comfort that day.

Be the first to comment on "The shot of a lifetime"