The etching on the bell is missing the final number for the year. Provided photo.

At first, I told myself, “It’s just a bell,” but over the years it took on a life of its own. It wasn’t just any old bell; it was the first bell that hung in the cupola of the Tioga County Courthouse, which was built in Owego in 1823 at the corner of Main and Court Streets.

The Tioga County Board of Supervisors ordered the bell in November 1855, the year they renovated the old courthouse. They allowed the county clerk to pay $300 for it from the Meneely Bell Company, of West Troy, N.Y., but the actual cost was only $200.

My search began in 1997 after reading an account in a 1931 newspaper regarding the lowering of the four towers on the present courthouse because of deterioration. They would be too costly to repair, especially in the middle of the Great Depression. Rather than rebuild them as they were originally designed, it was decided to lower them and hire an architect to redesign them. The architect was Arthur N. Gibb, of Ithaca.

What caught my eye in the article was the mention that the bell of sessions would be removed from the southwest tower and would not be needed by the county to call court into session any longer. It went on to say that the Village of Owego was given permission to loan it to the Croton Hose Fire Co. No. 3 as an alarm bell. 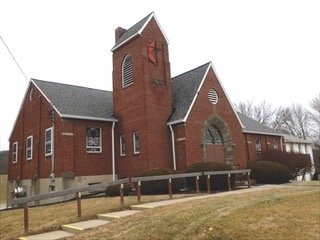 To check the facts, I found it spelled out in the Journal of Proceedings (the county’s minute books) dated September 14, 1931. A RESOLUTION was moved and adopted which read in part: “Croton Hose Fire Dept. on Talcott Street, with the stipulation that when the Fire Dept. did not need the bell any longer, it was to be returned to the county.” In 1952, Croton Hose switched from the bell to a siren.

My first question was, “After switching to the siren, where is the bell now?” I was excited, thinking I might get to see it, but it was not to be. I was permitted to review the 1953 Minute book at Croton Hose, but it was incomplete. In the April 29, 1953 minutes, it read in part: “It was agreed that we suggest that the board donate the bell to a worthy church that does not have a bell,” and a motion was made and passed. The following month, in the May 27, 1953 minutes, in part: “The bell has been offered to Lounsberry Church and they have accepted tentatively, pending agreement by trustees.” I could understand why they chose that church, because in October 1952, their old church burned to the ground in Nichols, N.Y. and they immediately started to rebuild a new one.

I then called a few people who were trustees on the Lounsberry Church Board at the time to confirm that they accepted the bell from the Croton Hose Co. in Owego. One of the trustees called me back to tell me no,  and that the bell they have came from a church that was flooded over from the Cannonsville Reservoir in Delaware County.

That threw me for a loop and my “wild goose-chase” began! I felt so sure it was the bell of sessions and was disappointed. However, I wanted definite proof that the bell really did come from Cannonsville, and over the years I brought up the subject to numerous people whom I thought could shed some light on it and even had it in the newspaper a couple of times.

I contacted the Delaware County Historical Society and their local historian who has been there for a long time. I researched the history of the reservoir and the churches that were located there. I read newspaper articles and checked a book about the flooding of the town and more. I learned so much that I began to feel that I could almost become another historian for Delaware County!

In the meantime, I read in The Owego Pennysaver that the Owego Fire Department’s Hose Team planned to build a steamer house to display their 1866 Amoskeage Steam Pumper and their 1939 Sanford Hose truck. Most importantly, it also noted that a steeple would enclose an antique bell. My heart leaped when I read “antique bell.” 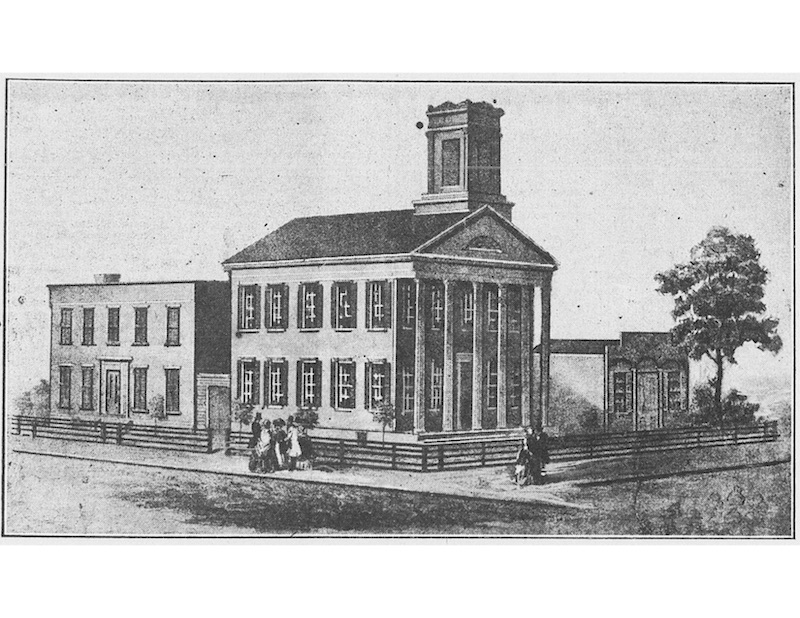 A rendering of the first courthouse, built in 1823 at the corner of Main and Court Streets. The bell was purchased for the cupola on that building after it was renovated in 1855. It was torn down after the present courthouse was built. Unfortunately, there are no known photographs of the building. Provided photo.

I immediately contacted Patrick M. Gavin of the fire department to verify where they were getting the bell from. I filled him in on the history of the bell of sessions and my long search and happily, I found out I was dealing with a kindred spirit. He replied to all my emails and phone calls; but the most generous thing he did for me was to use his valuable time to get permission from the pastor of the Lounsberry Church to climb up into the bell tower and take a few pictures. Along with Meneely’s name on the bell, one of the pictures shows the number 185 on it. We both agreed that this must be the bell we were looking for, but more proof was needed that it did not come from Cannonsville.

As time passed, I contacted the New York State Education Department and the NYS Library’s Manuscript and Special Collections section about having records of the Meneely Bell Company, in West Troy, N.Y. I hoped they would have a copy of the original bill of sale to Tioga County dated November 1855, but to no luck. However, they did recommend that I get in touch with the Hudson Mohawk Industrial Gateway, Burden Iron Works Museum in Troy, N.Y. because they have a collection of Meneely records. I sent an Email to them right away detailing my search.

To my delight, I heard back the very next day from the Executive Director of the museum who enlightened me regarding the number 185 on the bell. He said that the missing number was because the mold for the bell was formed in late 1855 (November) and the stamper wasn’t sure if the owners wanted 1855 or 1856 and left it unfinished “for now,” but it was overlooked. It was determined that the cost of recasting new molds was cost prohibitive and because of that, the foundry gave a price reduction from $300 to $200 to the county.

I promised I would send him the entire history of our bell, including information about the two huge Meneely fire bells at our courthouse today. I will also tell him about the St. Paul’s Episcopal chime bells that were installed in July 1921 that are also from Meneely.

My most recent contact was a call to the secretary of the church to see if she would delve into the church’s 1953 archives and re-check the minutes that the trustees back in 1953 might have overlooked. The bad news was, that because of the 2006 flood, many of their records were either destroyed or damaged. However, it was her opinion that the bell did come from a church in Cannonsville.

I did not agree and asked (more like “begged”) her to search even further. I even promised that if she found the answer, I would send a donation to the church. I honestly did not expect to hear from her again, but one evening the phone rang and she called back. I thought she was going to say she found proof that the bell was from Cannonsville, or that she didn’t find anything at all. The good news was that she contacted a woman who had possession of a souvenir booklet that was distributed to church members the day the new building was formally rededicated on April 3, 1955. The second page listed the names of everyone who contributed to the building of the new church. As she read line 15 to me, I almost fell off my chair in disbelief. It read: “Owego Fire Department – Bell.” It was like music to my ears. She generously sent me a copy that made my day (and yes, I generously sent a donation to the church.) My goose-chase was finally over!

Since then, I have reported my findings to the Tioga County Legislators and at my request, they wrote a new Resolution (in part): RESOLVED: The Bell of Sessions is a historical artifact and is legally the property of Tioga County, N.Y. and must be returned to Tioga County, N.Y. if the Lounsberry United Methodist Church deems it is no longer of use to them or upon request of the County for any reason.

Finally, the dreadful year of 2020 ended on a high note for me by proving my 23-year search wasn’t just for any old bell after all!