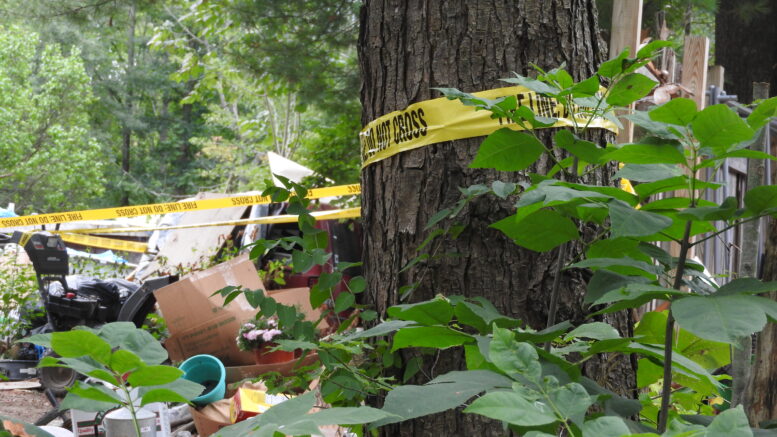 On Monday evening, fire broke out on Fred Catlin Road in Owego, leaving a family, including eight children, without a home.

According to Jim Morris, fire chief for Owego, they were dispatched to the home at 263 Fred Catlin Rd. at 5:29 p.m. on Monday, and when they arrived on the scene, the home was fully engulfed. Morris did note that everyone was out of the home safely.

It took departments about four hours to contain the fire and extinguish things. The structure was unsafe, Morris noted, so it took time. They also needed tankers called to the scene for water.

On Tuesday morning we spoke with the family, who had not even realized the full severity of what had happened, just hours earlier.

Melissa Swansbrough, who was visibly shaken and surrounded by her family, stated that she was out hanging up clothes on Monday evening, and her kids were at an adjacent home.

“I yelled, I see smoke, fire,” said Melissa, noting that the home went up fast.

A young girl, six-year-old Isabella, walked over and said, “My book bag was in that house,” as she pointed to the charred remains that sunk below the caution tape placed by rescue workers.

“Everything is a total loss,” said Melissa.

The home that succumbed to the fire was purchased for Melissa by her parents, Phyllis and Lawrence Adams, who passed last year. Melissa stated that her hopes are to rebuild at the same location.

“We want to rebuild and get a nice living spot for the kids,” she continued.

In the meantime, the family is staying on the property, and will be working from this point to start putting their lives back together.

If you have any clothes that are these sizes, you can drop them off at The Owego Pennysaver office on Tuesday, Wednesday and Thursday, between the hours of 10 a.m. and 4 p.m. Clothes must be new or like new.

We are also collecting new sleeping bags and school backpacks for the children.

Our office is located on Front Street in downtown Owego, and next to the arts council. We will deliver the items to the family once collected.

As for the fire, its cause remains under investigation. Responding to the scene on Monday were departments from Owego, Apalachin, Campville, Johnson City, Southside, Halsey Valley, and Candor. The Red Cross was activated and the Tioga County Sheriff’s Office and the Owego Police Department arrived to assist at the scene.

1 Comment on "Family of ten loses all to fire"