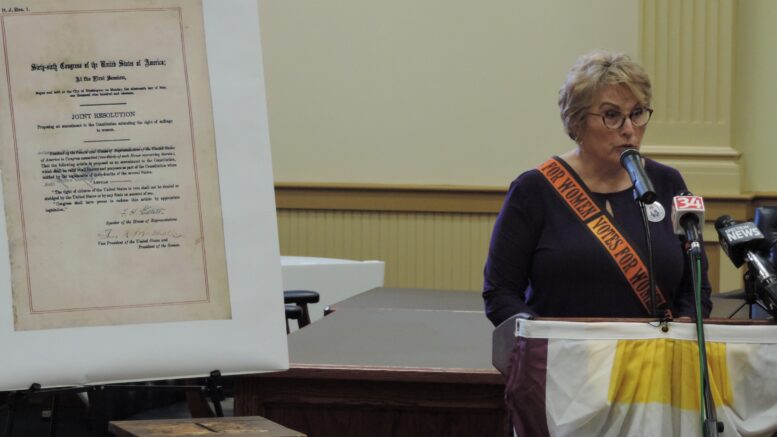 Tioga County Legislative Chair, Martha Sauerbrey opens the Women's Suffrage Centennial Celebration event on August 18 in Owego. To her right is a ballot box centered in front of a Joint Resolution copy proposing an amendment to the Constitution, extending the right of suffrage to women. (Photo by JoAnn R. Walter)

Susan B. Anthony visited Owego on Aug. 18 for an event at the Tioga County Office Building’s Hubbard Auditorium. The occasion celebrated the centennial of the ratification of the 19th Amendment of the U.S. Constitution, which prohibits sex discrimination in the right to vote.

Anthony was one of many women suffragists who passionately lectured, wrote, marched, lobbied, faced unthinkable abuse, and held silent vigils and hunger strikes in the decades-long fight for the right to vote.  Some, like Anthony, were jailed for casting a ballot. The 19th Amendment was first introduced in the Senate in January 1878 by Anthony and Elizabeth Cady Stanton. It was ratified on Aug. 18, 1920. 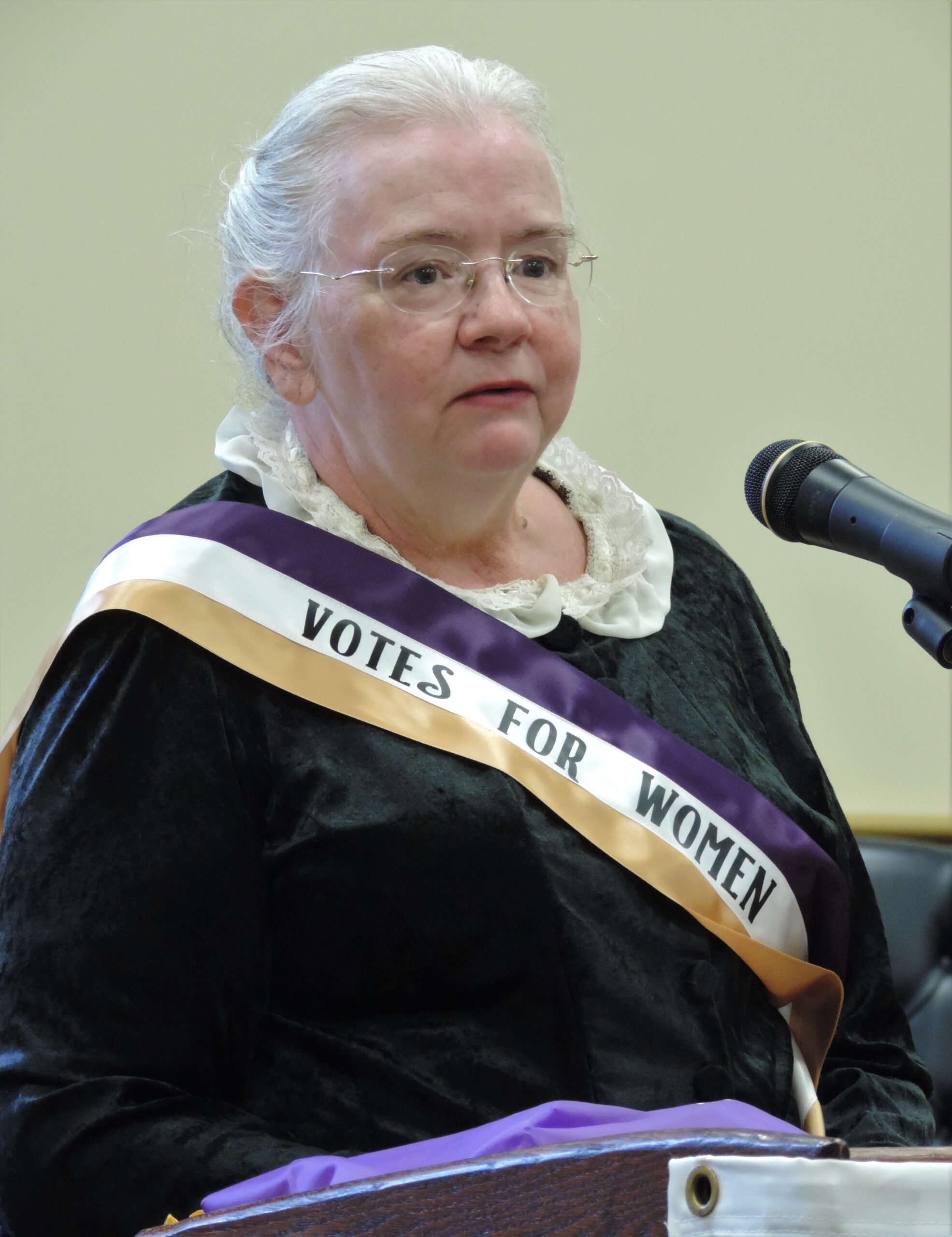 Yoder-Clark shared, “This is a significant remembrance. There were many who never lived to legally place a piece of paper in the ballot box.“ Anthony passed away in 1906.

Yoder-Clark explained that Anthony first focused on the abolishment of slavery before joining the suffrage movement at age 32. A belief in equal rights was part of Anthony’s Quaker upbringing, and, along with many passionate women such as Stanton, who wrote many of Anthony’s speeches, and Belva Lockwood, their extraordinary perseverance eventually won them the right to vote.

Yoder-Clark remarked, “When you place a vote today, I would like for you to think about the sacrifice that these women made.”

Around the Village of Owego, and elsewhere in Tioga County, you may have noticed purple, gold and white flags gracing historic homes and local businesses, and many that are women-owned. The flags, along with decorative buntings, commemorate the anniversary, the colors of which represent loyalty (purple), white (purity) and hope (gold), and provide identity for the suffrage movement.

Knickerbocker explained that the committee had originally prepared a yearlong celebration, however coronavirus concerns changed up the plans. She is pleased that many in the community have taken notice of the flags.

“The flags have inspired so many wonderful conversations,” Knickerbocker said, and further explained that the flag is referred to as the Victory Flag or Alice Paul flag.

From left, Tioga County Historian Emma Sedore, Suffrage Centennial Committee member Christina Knickerbocker, and Historic Interpreter Patti Yoder-Clark as Susan B. Anthony pose with the Victory Flag, also known as the Alice Paul flag. Paul was a suffragist who hand-sewed a star for each state that ratified the amendment. (Photo by JoAnn R. Walter)

The flag features hand-sewn stars that represent each state that ratified the 19th Amendment, and sewn by Paul, a suffragist and women’s rights activist.

A special guest at the event, Gracie Ousterout, who will start fourth grade at Owego-Apalachin School this fall, was accompanied by her mother, Lindsay.  Both came dressed in period attire. A Girl Scout for about four years, Gracie attended to learn more about the history of the suffrage movement and will work toward achieving a Belva Lockwood and Suffragist badge.

Knickerbocker mentioned that, going forward, the committee would work to advocate for the reissue of the Belva Lockwood Forever postage stamp, among other efforts in recognizing notable women of Tioga County. Lockwood was the principal of the then Owego female seminary at 249 Front St., now the Belva Lockwood Inn, and was the first woman to practice law before the Supreme Court. She authored articles about the suffragist movement and also ran for President twice.

Via a press release, Governor Andrew Cuomo announced that an effort to stabilize and preserve a childhood home of Susan B. Anthony, located in Battenville, N.Y., where she lived from age 13 to 19, is expected to be complete by September. 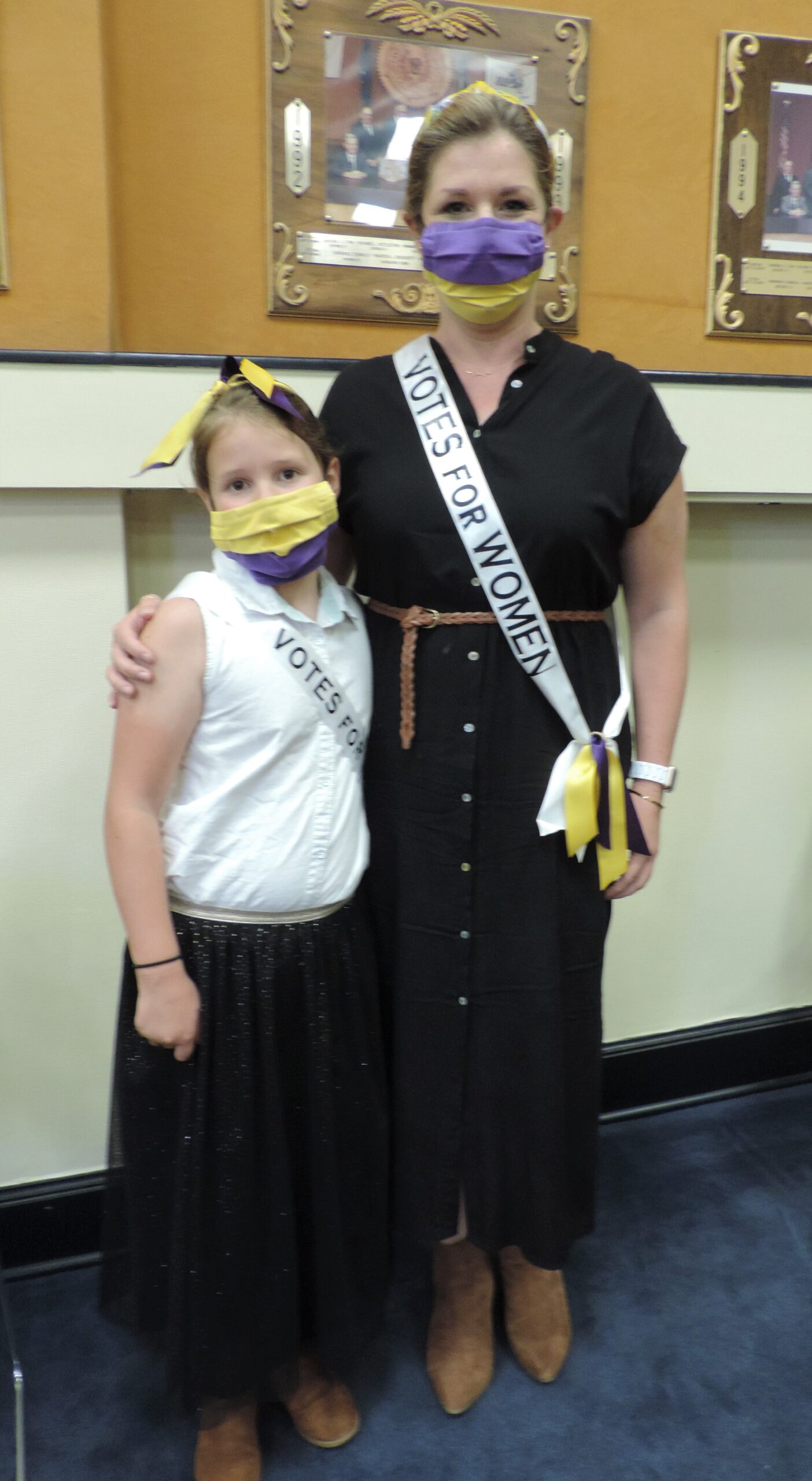 Governor Cuomo remarked, “We are proud to preserve and enhance this important part of American history for future generations,” and added, “As we commemorate the 100th anniversary of women gaining the right to vote, we also recognize there is more work to be done, and we will continue to create greater equality for all.”

Sedore concluded, “It is important that you never forget to appreciate your freedom to vote, and for the long, hard struggle by the women who led the way,” adding, “We should never take that for granted.”

Be the first to comment on "When you vote, remember the sacrifice"