Matt and Gilda Ward were two of the supporters that arrived in Vestal on Tuesday to #backtheblue. (Photo by Wendy Post)

“We should be defending the police, not defunding them,” said New York’s Republican Chairman, Nick Langsworthy, to a crowd that gathered in Vestal, N.Y. last Tuesday to show their support to law enforcement.

Back the Blue, #backtheblue, is a unified effort to raise awareness of the need for law enforcement, and even more so as police departments are being defunded in areas around the nation and while protests in the wake of George Floyd’s death, oftentimes violent, continue. 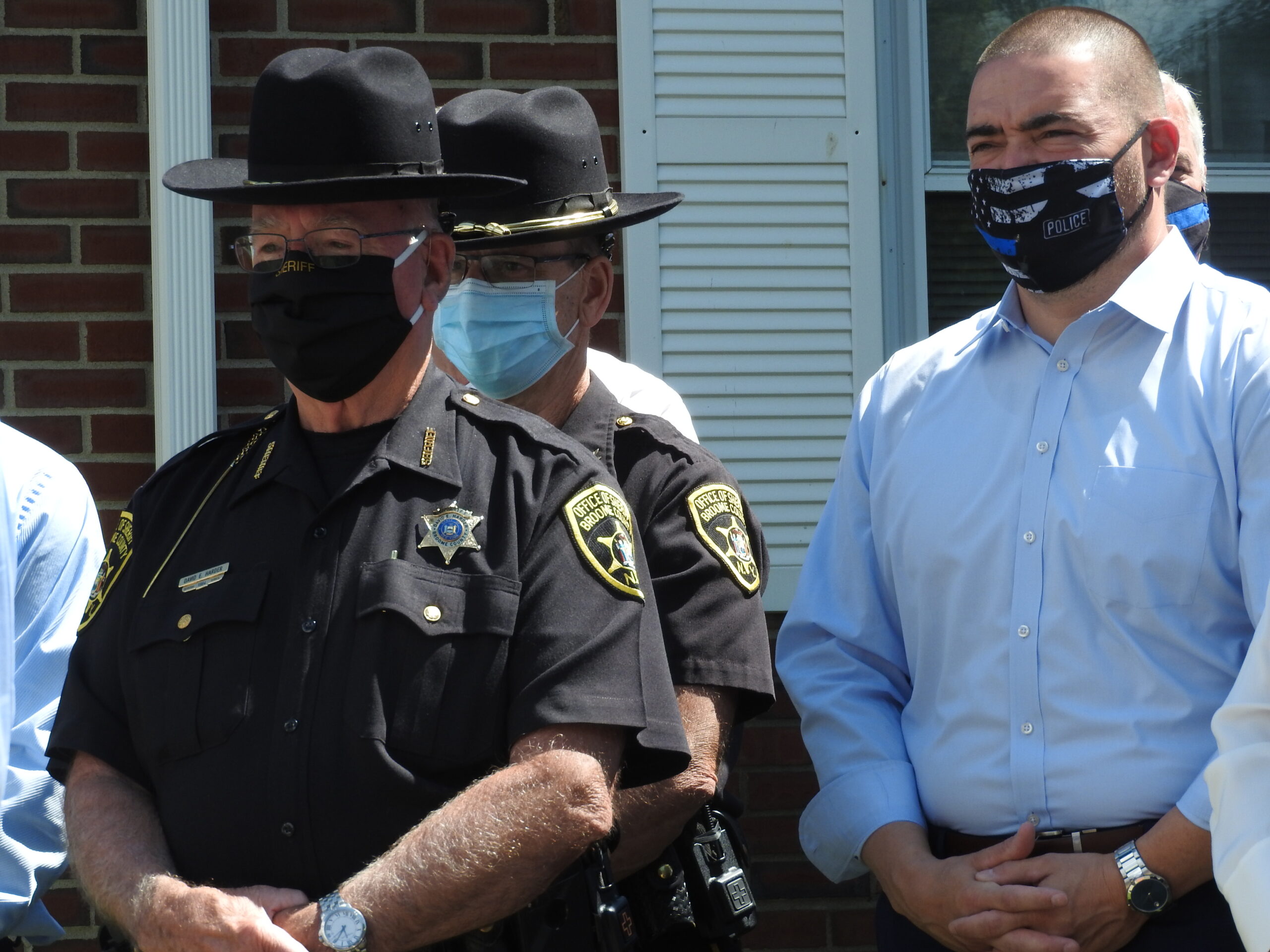 Senator Fred Akshar (R-52) and Broome County Sheriff David Harder listen to select speakers on Tuesday, and during a #backtheblue event held in Vestal on Tuesday. (Photo by Wendy Post)

One week earlier, and on Aug. 11, several dozen gathered at the Broome County Courthouse to show their support to law enforcement, but were met by counter-protesters three times the crowd size. For the gathering at the Vestal Police Department last Tuesday, however, there were no counter-protesters arriving, and dozens showed up to offer their support to the men and women in blue.

Matt and Gilda Ward, from Chenango County, stated that they are republicans, and want to support bringing back law and order. 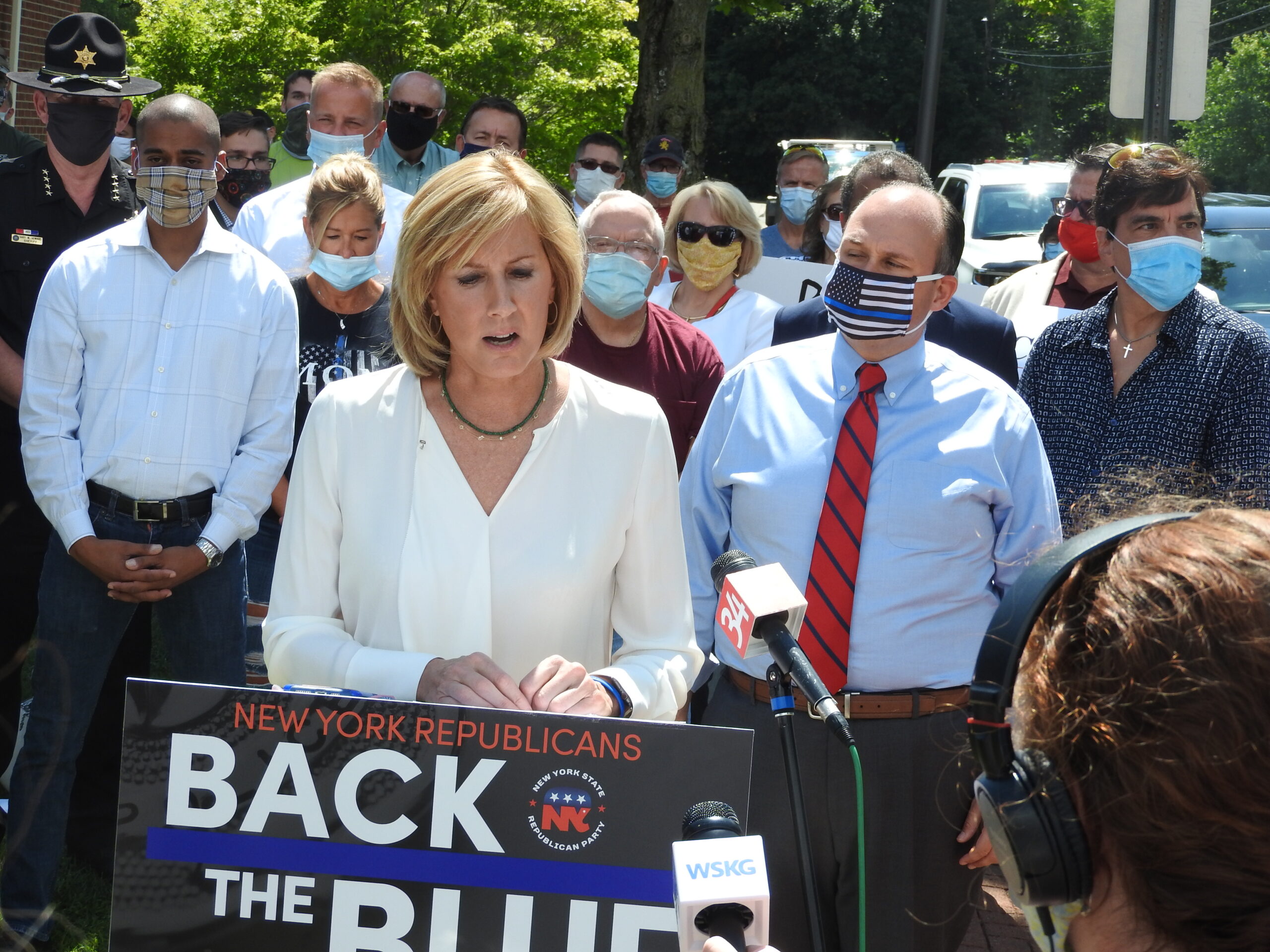 Congressional Candidate Claudia Tenney, a Republican running for a seat in New York’s 22nd District, addresses guests at a gathering held Tuesday to support law enforcement. Tenney goes into this year’s election with their endorsement. (Photo by Wendy Post)

Chairman Langsworthy opened up Tuesday’s event by stating, “Our feet stand firmly on the thin blue line, and we support them. We are here today to declare, we back the blue.”

Joining him for the gathering in Vestal were local dignitaries, as well as Congressional Candidate Claudia Tenney, who carries the endorsement of law enforcement into the upcoming election. 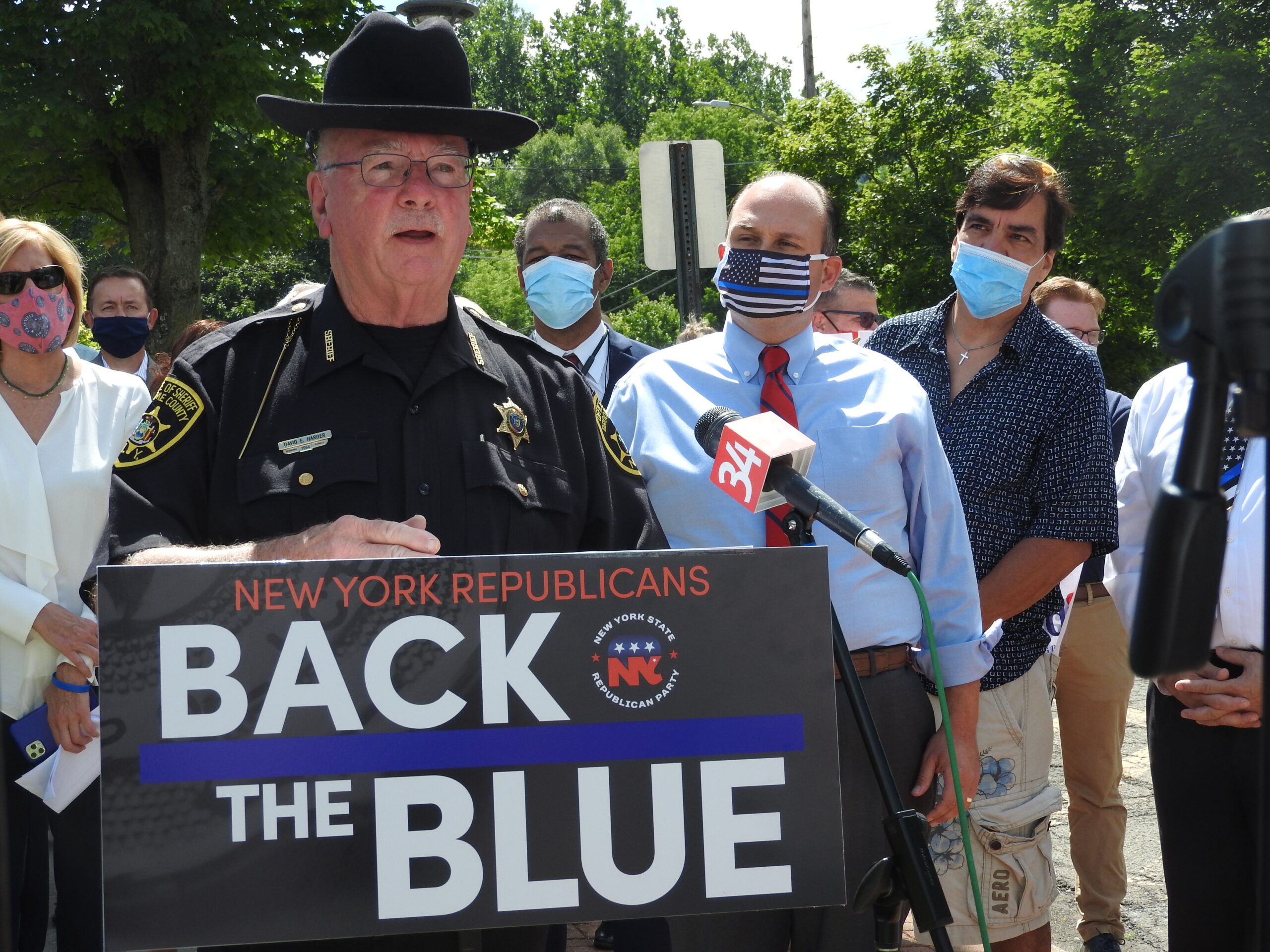 Chairman Langsworthy agreed with Tinney, adding, “[The police] don’t deserve the hate and disrespect they are being shown.”

Langsworthy also talked about the governor’s bail reform laws, and called them hurtful.

“The year 2020 is the year that we’re going to make changes,” Langsworthy stated. 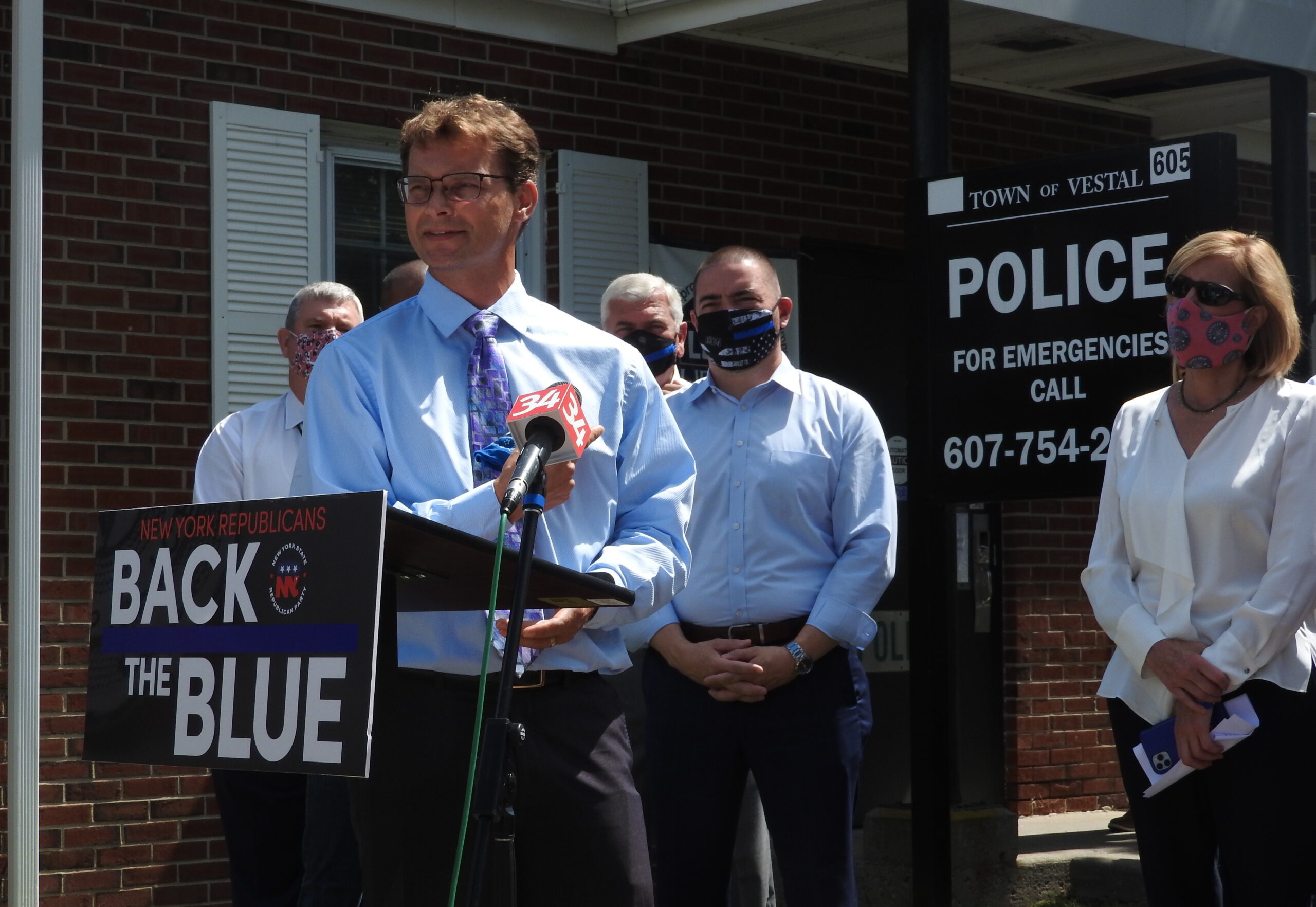 Also in attendance was Assemblyman Christopher Friend, who remains vocal about the botched bail initiative, calling it ineffective.

“The military and law enforcement are the only thing standing between you and evil,” said Angelino, adding, “and crime has doubled.”

Angelino was speaking about the governor’s bail reform laws and the violence that has erupted with the protesting taking place locally, and nationally.

In 2019, New York overhauled its bail law, limiting the number of crimes for which judges could set bail – mostly just those to be deemed violent felonies. 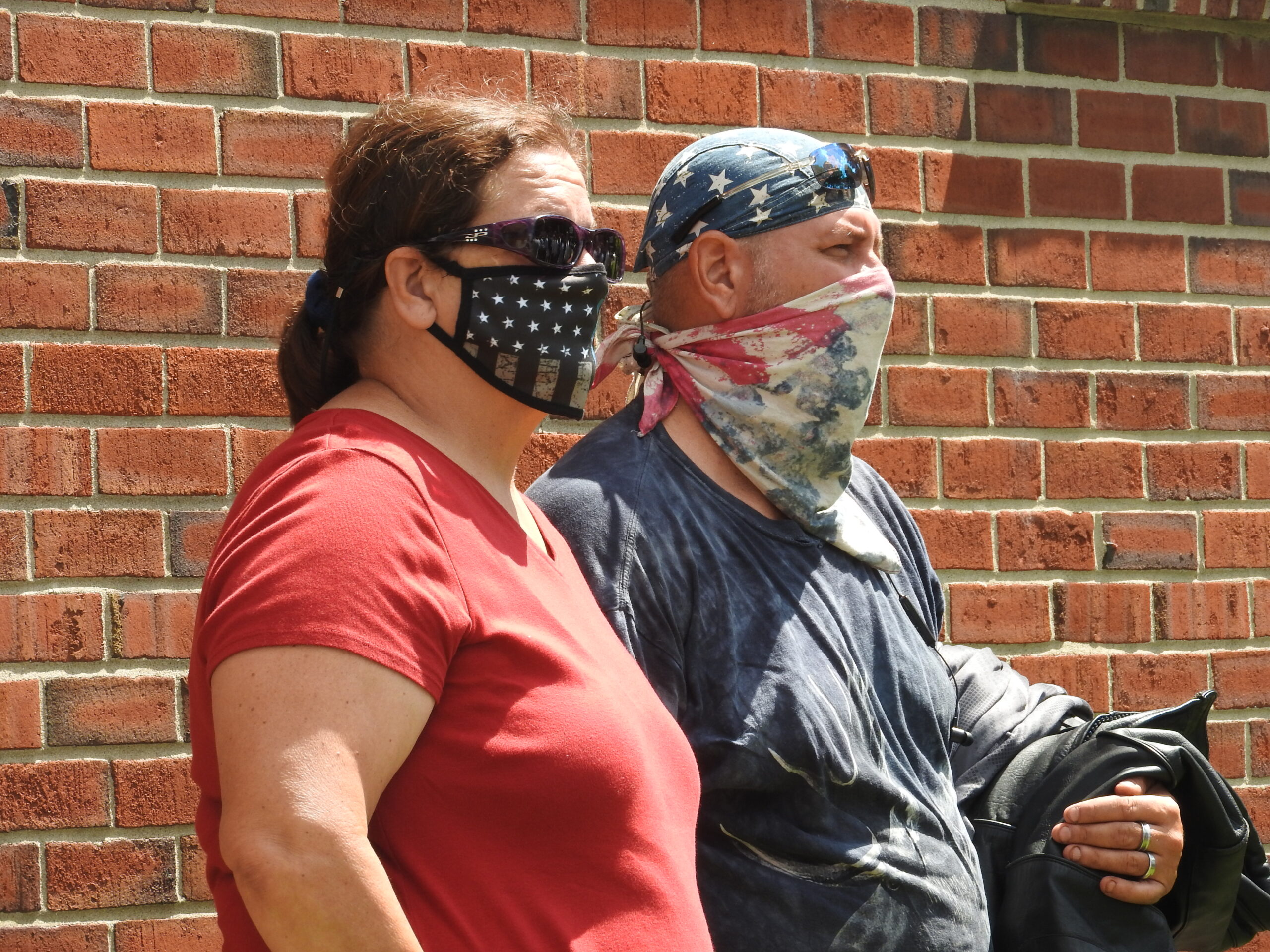 Supporters gather during a #backtheblue event held in Vestal on Tuesday. (Photo by Wendy Post)

Because of this, many in attendance last Tuesday, like Angelino, agreed that the bail law has led to repeat offenders.

In Owego, N.Y., over the last month, several crimes that were reported by the Owego Police Department were committed by the same individual, although days apart.

Between bail reform and defunding, police officers are having a difficult time trying to do their job, which is to ensure law and order.

Kathi Bailey, from Chenango Forks, was at Tuesday’s gathering to continue showing her support. Bailey takes care of the fallen officers, and helped Owego during the October 2019 Memorial service and plaque unveiling for its fallen officers.

More vocal at the gathering, however, was Senator Fred Akshar (R-52), who stated that the lawlessness is coming out of Albany and New York City.

“To those running,” said Akshar, regarding the upcoming election, “you either support the men and women of law enforcement or not.”

“I unapologetically support the men and women in blue,” he added.

Be the first to comment on "Backing the Blue"