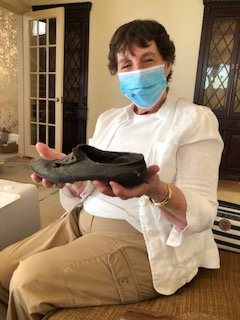 Emma Sedore, historian, is pictured with the box of shoes. Provided photo.

Wendy Deis and her husband, Tim, recently purchased a lovely old historic home on East Front Street that was built in the 1880s, and have been busy doing all the things that need to be done before moving in. Removing worn out wallpaper was one thing, but when she looked behind one of the walls, wedged firmly into the insulation, she was astonished to find a box of grubby, worn out old Victorian style shoes. Shoes? What? Why? These were questions that required immediate answers and to the computer she flew!

It wasn’t too difficult to learn about the history of shoes; but was there a particular reason to stash them behind a wall? It seems that in many countries around the world as far back as the 14th century and by immigrants to America into the 19th and 20th century, the practice continued because people were very superstitious and believed in demons, ghosts and goblins, but more than anything, witches! Witches, because they were in the form of humans.

Pictured is the box of shoes. Provided photo.

To protect their homes against any evil, they used shoes as decoys, because according to one theory, the evil force attacked the shoe because it believed it was the person and would then become trapped inside. It was also believed that if the shoe were removed from the house it would bring bad luck.

Hidden shoes have been found in many places around the world, from the simplest homes to cathedrals. In the Northampton Museum in England, there is a ‘Concealed Shoe Index’ listing thousands shoes found, plus more information that you might not want to know about concerning various concealed objects that are still being found today.

Getting back to Tim and Wendy, they have decided to try to have the shoes properly preserved, donate a pair to the Tioga County Museum, and then put them back into their hiding place to keep future generations safe in case any demons, ghosts, goblins or witches get any big ideas!

Be the first to comment on "A rare discovery"