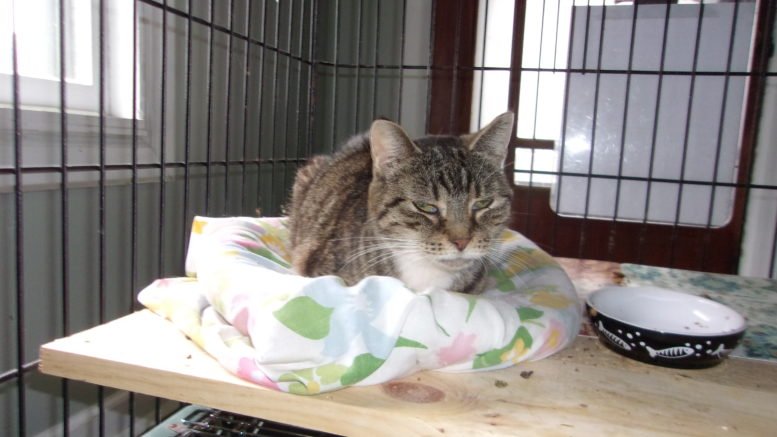 May 1, 2020 is the ninth anniversary of Maddie’s Meadows being open. If the world wasn’t so crazy I’d probably celebrate that somehow, but now is not a good time for sure, and I am proud to say that in the past nine years I have helped probably thousands of cats in one way or the other.

In the first five to seven years I kept records, but when I had over 30 cats the record keeping was forgotten, so I cannot give you a number but I’ve helped a LOT.  It is hard work and costly, but the lives that I’ve saved and changed make it worthwhile.

The kitty that is featured this week is Fey, and she is a good example of the work that I do. She has been at Maddie’s Meadows the longest; nine years in December.

I was walking my dog late one night in December 2011. It was very, very cold and I heard a cat crying. I knew I would not be able to help the kitty with a 50-pound dog on a leash, so I ran my dog home and came back and trapped Fey. She was terrified of me but I got her home and kept her in a cage, more to help her feel safe from me than me from her.

She didn’t mind the other cats, but she was terrified of people. After six months of being in a cage while I tried to put her at ease she was still terrified, so I made the decision to release her to see if we could coexist.

If I didn’t try and touch her she would tolerate me putting food in front of her. After all this time, however, she still does not tolerate being touched. But recently I had to take her to the vet and I prepared myself for the worst. I put heavy gloves on and tried to catch her to put her in the carrier. She was traumatized.

So I said to her, “All right, if you don’t want me to touch you then you need to walk into this carrier.” She did it! She walked right into the carrier!

That is what this is all about! I don’t know what happened to her to make her that scared of people, but we found a way to make it work; and that’s what Maddie’s Meadows does, one cat at a time, I try to make a difference and make their life worth living.

I would like to thank all the people who help me to do that. I am so blessed to have so many supporters that help me take care of the kitties. There is not room here to mention all of you, but you know who you are and how much I appreciate your support.

Thank you, and God Bless you!

Be the first to comment on "Maddie’s Meadows celebrates anniversary"