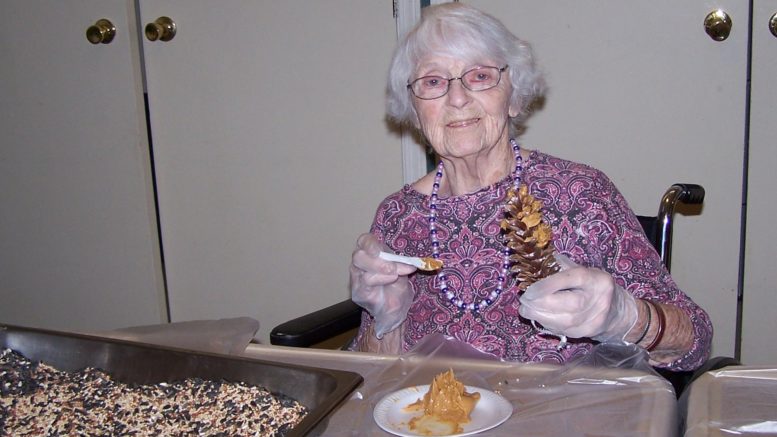 Doris Willett, who turns 100 on April 24, is pictured making pinecone bird feeders for the back yard. Provided photo.

On March 14, 77 residents at Riverview Manor Healthcare in Owego were put on lockdown, a move to protect vulnerable populations during the COVID-19 pandemic. For many inside and outside of the home’s walls, it provoked a variety of emotions, and also called for a change in residential activities.

Located on Fifth Avenue in Owego, N.Y., the residents at Riverview, which is normally filled with community members, loved ones and activities, is much quieter these days, with residents social distancing inside the facility as well.

“They are frustrated that they can’t see their families or eat as a group, but they are doing well with it,” said Debbie Savich, who has served as the activities director at the facility for 25 years.

“We do puzzles, crafts, cards, dominoes, and more,” said Savich, adding, “We have even been doing Facetime and Skype so our residents can visit with their families.”

She noted that a favorite activity is Bingo, which they play in the hallway now and by their doorway to keep social distancing in place.

Doris Willett, who has resided at the home for several years, and following independent living for 20, will turn 100 years old on April 24; a day she has been looking forward to for a long time.

Savich is asking the community to send her cards for her birthday, and suggested that maybe children from the community that are home as well can send in some cards. She did note that they should be sent to arrive by April 19, as the mail has to be held for several days.

Doris’s family will be arriving on her birthday as well so they can see her through the glass, and has prepared a film to show her to commemorate her birthday.

We caught up with her family last week to talk to them about what they were planning for Doris’s special day.

According to Barbara (Hendery) Willett, Doris’s daughter-in-law, they will have a cake in the Riverside Room for her 100th, and the family will be able to look in the room and watch her.

Barbara also described Doris as being in good health, and with no big issues. “She has arthritis, and those types of things that come with being 99,” said Barbara.

Doris’s only son, Richard, is having a tough time with not being able to visit his mom.

According to Richard, he visited Doris a couple of times a week, and now he calls her every morning at 8:15 a.m. He added that living in Owego helped him to stop in and see her more often.

Now, Richard hasn’t seen his mother since March 9; and it’s been what he described as tough; tough on him, and tough on his family.

“We talk every day,” said Richard of his mom, “but it’s not the same.”

The family had been planning a 100th birthday celebration for Doris, in which family was going to arrive. Now, they can only celebrate through the windows and walls.

“It’s been an ordeal for everyone,” said Richard, adding, “My kids and grandkids wanted to come. I wanted to do something, a big family deal; so I’m glad they’re (Riverview) doing it.”

But the goal, then and now, is to get at least 100 cards to Doris for her birthday.

“It’s the opening of things that she loves,” said Savich, about activities. She mentioned Doris’s baking, and some of the awards for cooking.

She also noted, however, that Doris understands what is going on, and is very excited about her upcoming birthday.

A glimpse at Doris’s journal offered a glimpse into what her life was like. She went to her first eight grades in a one-room schoolhouse that was right next door to her homestead. She had the same teacher for the full eight years, who was very artistic and had beautiful penmanship (referred to as The Palmer Method).

Doris wrote about the teacher bringing baby lambs into the classroom from her home to teach the children how to care for them. Also she brought in branches of fruit trees to teach grafting techniques for growing two or more kinds of apples on the same tree.

The students had to go a mile away to take their regents exams in 7th and 8th grades. Those same years she had the job of being the janitor in her one room school – unlocking the door every morning, starting the wood stove, and keeping it going all day long.

Her jobs included sweeping the room and coat closets, shoveling snow in winter, cleaning the chalkboards, bringing in pails of water (they all used the same drinking dipper), and washing windows on sunny days. All this for $1 a week; so she was excited for four weeks to go by, as that was when she was paid $4.00!

No doubt, a much different time from where we are at today. As a matter of fact, if born a couple of years sooner, Doris would have been alive during the entire 1918 influenza pandemic, which lasted until December of 1920.

According to her son Richard, Doris also lived alone for 20 years in her Endicott home following her husband Gordon’s passing. Thanks to her independent living, it appears that Doris is faring well, at the honorable age of 99, soon to be 100.

If you would like to send cards to Doris, you can mail them to Riverview Manor, 510 Fifth Ave., Owego, N.Y. 13827, Attention: Doris Willett.

We Are In This Together

Because many are separated from their loved ones in this fashion, The Owego Pennysaver also invited the residents of the home to share their face with the community, and let everyone, on the outside, know that they are doing okay.

Personally, I visited my own father at his independent living facility in Rochester last weekend. I was able to take pictures drawn by my grandchildren, his great-grandchildren, to be looked at through the window.

Outside of not being able to visit Owego and visit and go to the casino, as well as his drives to Batavia a few times a week to bet on the horses, my dad is doing well. He does miss a good game of bridge, too.

There are many others in the same situation, or worse; there are those that have lost loved ones and are not able to hug them, or say their goodbyes.

This pandemic is tearing families apart, yet somehow bringing them together, too.

Please feel free to share your stories and photos; we would love to have them.

You can email to wpost@owegopennysaver.com.