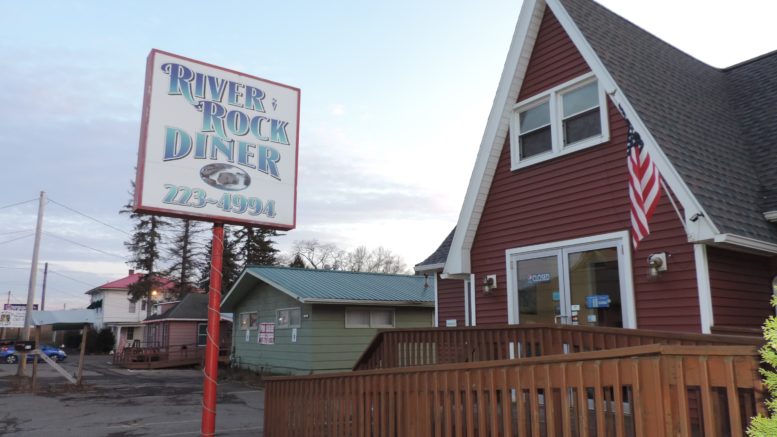 The River Rock Diner, located at 904 State Route 17C, opened in October 2014. Owner Leon Anastasakos is celebrating five years in Owego. Happy to be a part of the community, Anastasakos took some time out to discuss what it takes to succeed in the service industry. (Photo by JoAnn R. Walter)

When Leon Anastasakos opened the River Rock Diner in Owego five years ago, he hoped that his restaurant would become a new favorite in the community, as well as a stop for visitors passing through.

Anastasakos had previously owned and operated a restaurant in Endicott, which he closed; so he was a bit nervous at first about planting new roots in Owego.  Holding more than 25 years of experience in the business, he felt confident that the location was the right choice.

“It takes determination, commitment and sacrifice,” he explained, “And it becomes your lifestyle, seven days a week, 365 days a year (although he closes on Christmas Day).”

During our conversation he takes notice of the flooring at the rear entrance, which he said is starting to look a little worn. Leon mentions that he will look into replacing it, along with adding chair rails where dining room chairs have bumped against the wall.

But it’s those things that actually make him smile. He realizes that a worn floor and a few paint nicks on the wall means there has been a lot of traffic at River Rock.

“I’m really appreciative of my customers,” Anastasakos said, and shared that one of the signs of his success to date are the repeat customers he sees daily or weekly.

Whether it’s a customer who stops by for a cup of coffee, a quick bite, or those who stop in for a to-go lunch, or others who want to linger and enjoy a meal, Anastasakos is happy to see everyone who walks through the door.

Anastasakos is also grateful that within the Owego community, businesses tend to patronize each other, and, he said, “That is different than other communities I have been a part of.”

He also welcomes customers who stop in while traveling through the area, and referred to social media sites such as Google or Trip Advisor, and where positive reviews by customers have influenced other travelers to choose his restaurant.

The work getting to this point didn’t happen overnight, and he credits his dedicated employees, too, and a few who have been with him ever since opening day.

“I’ve revamped the menu a couple of times, and change up the specials,” Leon remarked.

Anastasakos is happy to see other new restaurants, too, that have opened up in the area since River Rock. For those who are considering taking the plunge into food service, Leon shared that educating yourself on all aspects of the business, such as wages, payroll taxes, required insurances, utilities and more, along with formulating a business plan with a model to follow, is essential, as is having financial security to start with and a willingness to accept risk.

“It takes money to make money,” Leon said, adding, “You may finally see a return on your investment after about two years.”

But that’s not all, Leon remarked, “You need to be ready for anything, every day is unpredictable,” and further cited that the food service industry is one of the most difficult to succeed in.

On Jan. 31, Leon opened the Owego Steakhouse. A fine dining restaurant, it’s located on the Susquehanna River, as is River Rock, and just a few doors east.  Soon Leon will be celebrating the Steakhouse’s first anniversary. In addition, he also co-owns Pete’s Auto Repair located in Vestal, and where he immerses himself in another passion of his, working on cars.

Anastasakos’ excitement about River Rock being added to a Route 17/86 road sign soon is not only good for his restaurant, but is a positive reflection for the community, too. He applied through New York State once he learned Pizza Hut was closing. The sign, originally slated to be installed in October, will feature the River Rock Diner and five other restaurants, and those being fast food chains.  Due to bridge construction and signage updates by the state, the install date is on hold.

“I’m just happy that one real food place will be on the signs,” he said.

And, knowing this makes him smile again.

Be the first to comment on "River Rock Diner celebrates five years!"