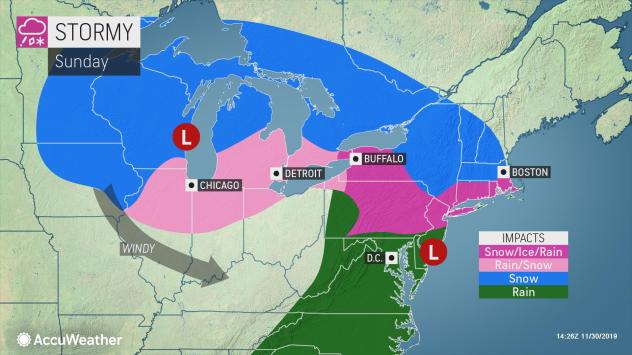 The second part of a double-barreled storm is forecast to unload heavy snow and create difficult travel over a large part of the northeastern United States, including some major cities from Sunday to Monday night.

A winterlike storm from the Midwest will move in this weekend, then hand off to a new coastal storm that strengthens by Monday.

Snow, on the order of 6-12 inches, is forecast from the northeastern corner of Pennsylvania to central Massachusetts and southwestern New Hampshire. However, pockets of 12-18 inches are in store for the Catskills and Berkshires, where an AccuWeather Local StormMax™ of 24 inches is expected.

Heavy snow is in store for much of the Hudson, Mohawk and Connecticut river valleys with a few inches as far south as parts of the Delaware and Lehigh valleys.

Part of the storm will bring ice, rain and a wintry mix along the Interstate-95 corridor from Philadelphia to New York City and Boston. The storm will hold off until Sunday evening around Boston.

A wintry mix is forecast to develop around the Meadowlands Sports Complex in East Rutherford, New Jersey, where the Packers will take on the Giants during Sunday afternoon. Farther south and west, drenching rain is in the offing for the NFL game between the 49ers and Ravens at Baltimore, and perhaps in Pittsburgh for the Browns and Steelers match up.

A significant buildup of ice is forecast over parts of the central Appalachians to southern New England with dangerous black ice travel conditions and the risk of falling tree limbs and power outages. How damaging the ice storm is will depend on whether the primary form of precipitation is sleet or freezing rain. Sleet tends to bounce off, while freezing rain weighs down trees and power lines.

The middle part of the storm is likely to be the warmest during Sunday night. This is when just enough warm air is likely to sweep in from the south and the Atlantic to bring plain rain to coastal areas of the upper mid-Atlantic and southeastern New England.

However farther inland, a transition from wet snow to more powdery snow is in store in some areas and a wintry mix or ice to snow in others as a storm along the coast strengthens and begins to pull in colder air late at night.

Rain showers will change to snow showers from the Ohio Valley Sunday to the central Appalachians during Sunday night and Monday. Locally a coating to an inch or two of snow can accumulate in these areas.

During Monday and Monday night, cold air is likely to collapse toward the mid-Atlantic and southern New England coast to bring a change to accumulating snow.

So while the Monday morning commute may only bring limited travel problems, conditions may worsen for the drive home Monday afternoon and evening along the I-95 corridor from Philadelphia to New York City.

Should the storm strengthen a bit more, heavy snow may fall right in New York City and a few inches might occur in Philadelphia during Monday afternoon and evening. Boston could pick up a foot of snow in such a case where rain does not hold back the accumulation.