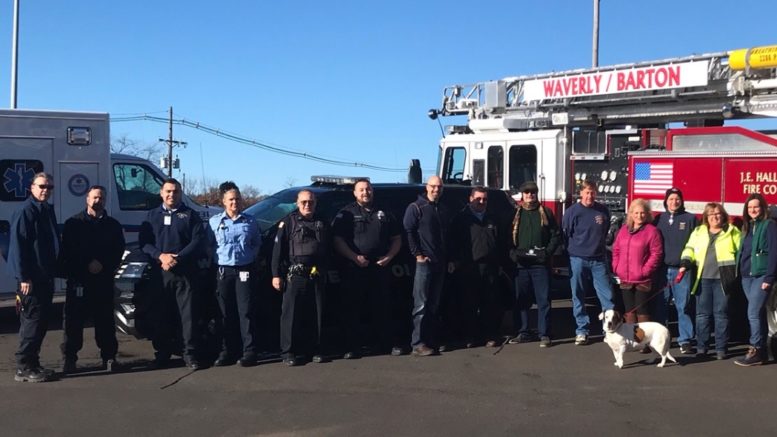 Attended by members of the police force, EMTs, firefighters, members of the public and town officials, Sandy Crawford of Tioga State Bank said the effort was all part of the bank’s efforts to be tangentially connected to whatever community they are in.

“We brought pizza and calendars to show that appreciation. This is the first year that we have done anything like this and I hope it becomes an annual thing because it has been wonderful to come out and meet with all these first responders,” Crawford said.

Firefighter and Waverly Barton Fire District Secretary Sherrie Cole helped organize the event and said that it was nice having the community show their support.

“The mayor was here, a member of the board of trustees, members of the public and some off-duty first responders. It was nice to see that people do care, especially since we are a volunteer department,” said Cole.

Beyond having the community reach out to show its support, Cole said it was nice to see so many people from different first responder divisions in a social setting.

“It gave us a chance to socialize beyond being on a scene and there isn’t an accident or a fire going on,” Cole said.

She added that she thought the event was especially well attended in the morning when the breakfast pizza was available.

“We had the breakfast pizza ready for guys who just got off the midnight shift,” Cole said.

Crawford added that the idea for the event was inspired by First Responders Day, Oct. 28.

“So I reached out to Sherrie and this was the best day we could come up with,” Crawford said.

Crawford said that engaging the community beyond business hours is tantamount to the kind of community culture Tioga State Bank strives to establish.

“Tioga State Bank is very focused on giving back to the community,” Crawford said.

With so many members of the district being active hunters and deer season opening on Saturday, Crawford said that she and Cole decided to have pizza available throughout the day.

“It lets the guys who have been out there, but haven’t gotten their deer yet, get something to eat before they decide to get back out there. A lot of guys are out there right now, my son and son-in-law just got a 10 pointer this morning,” Cole said.