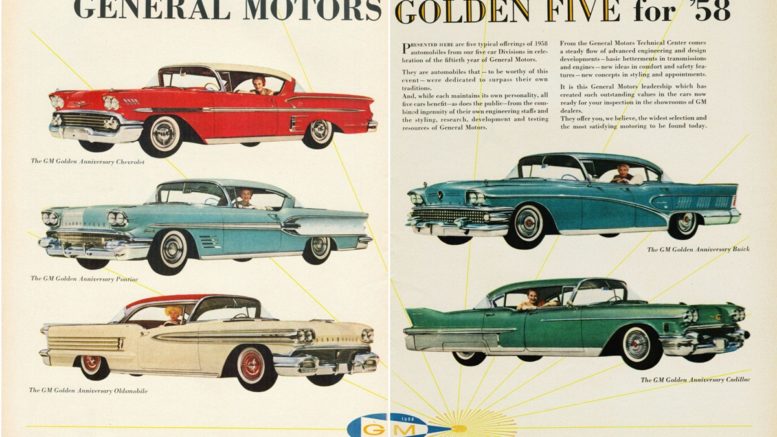 This ad for the five 1958 General Motors vehicles featured the new Chevy, Pontiac, Cadillac, Oldsmobile and Buick. None will ever win any special awards for overall design, although the Cadillac and Buick, when properly equipped, attract more collector attention. (Compliments General Motors)

Q: Greg, I read your columns regularly in the Bloomsburg, Pa. newspaper and enjoy them. Being I grew up in the same period as you (I’m an aging baby boomer) I remember you mentioned some of the best designs came in the 1950 decade. I remember you liked the Mercury in ’55 and ’56, the Ford in 1957 and those nice looking Chevys from 1955 to 1957.

However, if you had to pick a bad year from the 1950-decade, which one would it be?

A: Joe, in my book, 1958 was a year that produced some of the worst exterior designs. For whatever reason, and following wonderful years of car design from 1955 through 1957, most every manufacturer in my opinion added too much chrome, added unnecessary curb weight in an unattractive boxy design. Then, the battle of the rear tail fins began, and it got out of hand real fast.

Back then instead of concentrating on safety innovations and suspension upgrades, car manufacturers changed the exterior appearances of their fleets each and every year using the exact same chassis year after year.  However, for car enthusiasts, it was a great decade as each year the new exterior model introductions were big events that included newspaper, television, and radio promotions that to this day are lovingly remembered.

But boy were us car enthusiasts in for a major disappointment!

When the new 1958 models arrived in late 1957, some of the most overgrown overly chromed, square design “boxes” appeared at the new car showings. Of the big three, (GM, Ford, Chrysler) I feel General Motors led the way with unloved looks, even though under the hood they had some fine engines. The 1958 Pontiacs and Oldsmobile’s were just so-so, and the usually good-looking Buick wasn’t too far ahead. Even the 1958 Chevy, which was probably the best of the GM bunch along with Buick, looked nothing like its predecessor 1957 Chevy.

Ford, too, lost its way. The 1958 Ford was at least acceptable in looks, but still nowhere near the 1957 models in aesthetic approval. A major Ford disappointment was Mercury, which had already gained weight and some odd exterior looks in 1957 as it completely deviated from what I’ve always said was one of the best car designs ever with the 1955 and 1956 Mercury. For whatever reason, everything seemed to say “let’s add more weight and chrome to the Mercury, box it off and even add a backward window that opens along with some weird rear tail lamps. “

Perhaps the biggest eyesore from Ford was the new full size ’58 Lincoln, which grew to immense proportions in all manners. As for the all-new Edsel, its unique design wasn’t nearly as bad since there was nothing to compare it to. I actually liked the rear design quite a bit, but Edsel’s front was way too different for most car buyers.

Even the Ford Thunderbird, which made great impressions as a two-seater sports car from ’55 through ’57, fell to the 1958 car design curse. And even though I do like the looks of the 1958 Thunderbird very much, it was a major change from the sporty two-seater T-birds into a bigger, heavy, four-seater. Ford didn’t seem concerned, as the T-bird was a success in ’58 and ’59 and is an in demand collector car. It also made a name for itself in NASCAR racing, too.

Over at Chrysler, the “fin wars” began in earnest in 1957 and then took off. By 1958 some of the biggest wings ala Plymouth and Desoto were sitting in the dealer showrooms and looking way different than before. However, of the big three manufacturers, I’d opine that the 1958 MOPARS were the best looking of the Big 3, including that famous red Plymouth Belvedere ragtop that made it to Hollywood fame as “Christine.”  Culminating the fin wars was the 1959 Cadillac, as “fins were in” even atop GM’s top luxury brand.

Studebaker and Packard, trying to unite the two companies into one big success did just the opposite. Under pressure from the profit and loss managers, Packard put out its final model in 1958 while Studebaker was another story as its 1958 models were dull and homely, especially the 1958 Studebaker Scotsman. This feeble, stripped down Studebaker ran from zero to 60-mph in 21 seconds and sales were atrocious. The 1958-year literally brought the Studebaker / Packard nameplates to its knees so the company stopped making Packard’s, took the poor selling Scotsman, added new sheet metal and presto – the 1959 Studebaker Lark. The consumers loved the Lark, and it saved the company and postponed bankruptcy for a few more years.

Rambler, meanwhile, wasn’t that bad as consumers never expected anything special to begin with. However, 1958 year was actually pretty good for Rambler as they motored along with decent designs. Today the 1958 Rambler and Ambassador look decent in comparison.

Can’t end without mentioning that although ’58 might not have been a good year for design, engines were evolving, including Chevy’s new 348 with tri-power carbs, the Hemi grew into 392 inches in ’57-‘58, Ford’s NASCAR T-Birds had 430 V8s under the hood and Rambler’s 327 Rebel was a terror in businessman’s clothing.  The Corvette, too, offered a fuel injected 283 in 1958 that put out 290 horses.

Things would get better in the 1960s, which we’ll visit in a future column including body design and muscle car engines. Thanks for your letter and stay tuned.

(Greg Zyla is a syndicated auto columnist who welcomes reader questions and comments on cars at 303 Roosevelt St., Sayre, Pa. 18840 or email at greg@gregzyla.com.)