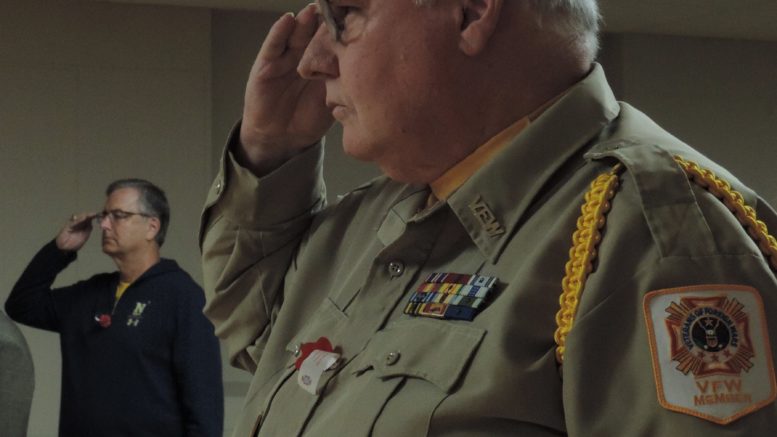 In the foreground, Deacon Mike Donovan, who delivered the invocation and benediction at the Veterans Day ceremony, and Al Eaton, member of the Southern Tier Veterans Support Group, salute during the ceremony held on Nov. 11 at the V.F.W. Post 1371 in Owego. (Photo by JoAnn R. Walter)

Veterans from all branches of the military, along with the community and local officials, gathered at V.F.W. Post 1371 in Owego on Nov. 11 for Tioga County’s annual Veterans Day ceremony.

Jim Raftis, Sr., Korean War veteran and Memorial Day Chairman, shared that Veterans Day is, “A day when we recognize and give thanks for the service and sacrifice of the men and women who have served in the Armed Forces.”

A moment of silence was given following the reading of names of Tioga County veterans who have passed away since Memorial Day.

Gold Star mother, Barbara Bilbrey, whose son, Charles Jr., lost his life in 2007 while serving in Iraq, read the poem, “In Flanders Fields.” The World War I era poem’s signature poppy remains a symbol of remembrance for military members killed while serving our country.

Dick Zavatto shared the story of the new Candor Veteran’s Memorial, which was dedicated on Memorial Day.

Adeline Whitmore took on her Girl Scout Award project to establish the Village of Nichols Veterans Memorial Park. The memorial, a large stone surrounded by a flag, benches and landscaping, honors those who have served to protect our freedom.

“It’s an honor to show appreciation to someone who has done so much for this country,” Whitmore said, adding, “I have relatives who are veterans, and it means a lot to me personally.”

Sauerbrey also gave an update on signs that will be installed in recognition of Tioga County’s designation as a “Purple Heart County.”

“The good news,” Sauerbrey said, is, “We originally purchased eleven signs, and now another eleven signs will be distributed, on both state and county roads.”

Danielle Ingram of the Veterans of Modern Warfare Chapter 9 announced, “For the past three years we have celebrated Gold Star Mothers during the last weekend in September. We wanted to honor everything they [Gold Star Families] have given up, and the loss of their child,” and added that she is working together with Sauerbrey to, “Designate a Gold Star Highway on Route 17C.”

Once the project is approved, Tioga County will become one of the leading regions in both the state and nation to feature a Gold Star Highway. Ingram explained that there are about eight such highways in the nation; one dedicated this year in Newburgh, N.Y.

The V.F.W. Post 1371 Auxiliary shared that the group recently shipped out 13 boxes to military personnel stationed overseas. Christmas Cards enclosed in the boxes were made by local students and scout groups.

The Auxiliary also announced their “Good Job Award,” and recognized Jim Raftis, Sr. for his ongoing dedication, commitment and love of veterans.

Be the first to comment on "Veterans honored for their service"