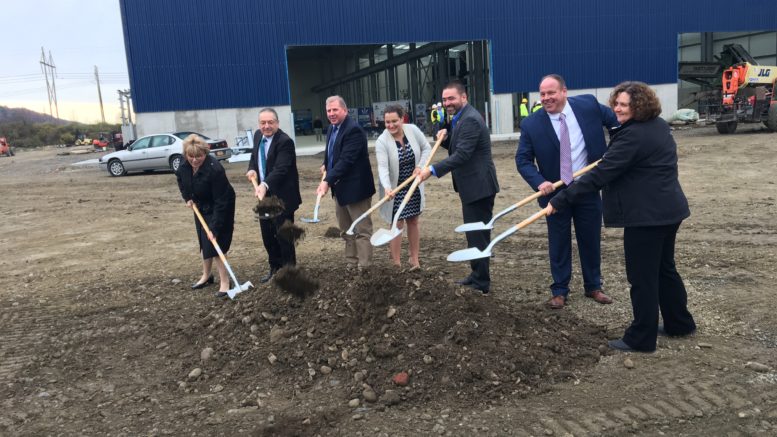 On Tuesday, Nov. 5, officials gathered at the site of the new hot-dip galvanizing plant, located at 272 Corporate Dr. in Owego, for a groundbreaking ceremony for Voigt & Schweitzer (V&S), LLC. The 75,000 square foot facility will provide galvanizing services in New York State and throughout the region.

Set to open by the end of the year, the company will add 34 jobs to the community and will provide hot-dip galvanizing services for the steel construction market, bridge and highway industry, utility industry, and various manufacturing sectors.

Brian Miller, CEO and president of V&S, LLC, addressed local dignitaries and other officials attending Tuesday’s groundbreaking, noting that the location was chosen because of its geographic location to I-81 and Route 17 / I-86.

Miller also noted that of the $14 million dollars utilized for the facility’s build, which started in July, $5.9 million is being spent with local contractors.

Legislative Chairwoman Marte Sauerbrey also addressed guests, and echoed what Miller said, exclaiming, “One third of the money is being spent locally.”

“It’s been a team effort,” she added about the players that helped bring the jobs and work to Tioga County.

According to Donna Howell, from Empire State Development, the project received a $375,000 capital grant, and will receive a $375,000 Excelsior Tax Credit annually based on job creation.

In an email, Shari Voorhees-Vincent, press secretary for Empire State Development in the Finger Lakes, Central New York and the Southern Tier, wrote, “The company is eligible for up to $375,000 in state tax credits in exchange for agreed to job creation commitments (up to 42 by 2023). They only get the credits however when they hit the designated markers each year.

Voigt and Schweitzer plans to add 34 new jobs by the end of the first year.

Another reason for the build in Owego, according to the Miller, is the demand. As an example, Miller stated that Murphy Company, their sister company, has a steel shop in Vestal and they have to send them to Utica.

Now, upon opening, V&S Galvanizing will be able to provide the service in Owego. According to V&S, hot-dip galvanizing is the process of immersing fabricated steel into a bath of molten zinc at a temperature of roughly 840 degrees. Once dipped, the steel reacts with the molten zinc to form a series of zinc-iron alloy layers, which together with the outer zinc layer are metallurgically bonded to the steel surface. This process, according to V&S, ensures a uniform, corrosion protective coating on all surfaces, even on those areas not normally accessible to mechanical applicators.

Some of the company’s customers include U-Haul, Watkins Glen, and even Yankee Stadium. The company is excited about the location, and the expanded opportunity to reach their customers.

LeAnn Tinney, Tioga County’s Economic Development director, was applauded by Senator Fred Akshar during the groundbreaking ceremony for her hard work in bringing this project to Tioga County.

The company thanked everyone as well, and stated in an earlier release that Governor Andrew Cuomo, Senator Akshar, Empire State Development, the Tioga County Industrial Development Agency, the Town of Owego, NYSEG, Rick Searles (CBRE) and TEAM Tioga’s efforts made the project happen.