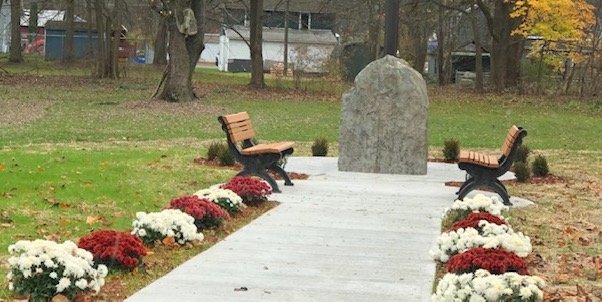 Veterans Day 2019 is a day to honor our nation’s veterans. It is not a day of mourning, but a day of celebration and honor.

A double themed Veterans Day 2019 will be held at 11 a.m. Monday, Nov. 11, in Glenn A. Warner Memorial Hall of Veterans of Foreign Wars Post 1371. “Honoring All Who Served including Purple Heart and Valor Honor Recipients” and “Honoring Locals Who Have Supported Our Veterans” are the themes for this year.

At the Tioga County Veterans Memorial, American and POW/MIA flags and flags of military branches fly on this day to show support to our veterans. A Remembrance wreath at the Memorial placed by Dean Morgan of VFW Post 1371 Honor Guard honors all from Tioga County who have served in war and peacetime.

Find a way in the Sunday worship service to honor those who have served and provide spiritual comfort to their families. Also honor the families of those who have lost loved ones in combat during the service.

“Bells of Peace. A World War One Remembrance” encourages citizens and organizations across the nation to toll bells in their communities 21 times at 11 a.m. on Nov. 11.

The American Legion encourages participation anywhere where people may gather on that day to honor and remember.

Other churches in Tioga County are encouraged to ring their bell if they have one.

The nationwide program is designed to honor American men and women who served 101 years ago during World War I, especially the 116,516 who died. The war ended by an armistice agreement between the warring countries at 11 a.m. on Nov. 11, 1918.

Services always begin at 11 a.m. on Veterans Day – the 11th hour of the 11th day and the 11th month, this year at the Glenn A. Warner Memorial Hall of Post 1371 Veterans of Foreign Wars.

Dean Morgan of Post 1371 Honor Guard sounds a trumpet at 11 a.m., the same time of the signing of the armistice 101 years ago.

Posting of the Colors by the VFW Post 1371 Honor Guard will be led by Walt Beardslee and assisted by other participating posts to include the Vietnam Veterans of America, Veterans of Modern Warfare, and the American Legion. Andrea McBride will sing the National Anthem and the Invocation will be given by Honor Guard Chaplain and St. Patrick’s/Blessed Trinity Deacon Michael Donovan.

A proud Army mother and Gold Star Mother Barbara Bilbrey will read the iconic poem “In Flanders Fields.” The poem speaks volumes about those who lost their lives during the First World War on a field in Belgium in May 1915. Tioga County has 25 Fallen Heroes from WWI.

Red poppies will be available to remember WWI Fallen Heroes. The poppy is a symbol of remembrance. Its origins lay in the opening lines of the war poem, “In Flanders Fields” by Canadian Officer John McCrae.

Recognition will be accorded to Purple Heart and Valor Honor Recipients and all veterans for wartime and peacetime service.

Eleven years ago on Veterans Day, Route 38 was dedicated The Vietnam Veterans Memorial Highway of Valor. Two green highway signs – just north of Turner’s Bridge in Owego and in Newark Valley at the Route 38-38B intersection – remind motorists to remember these veterans.

The POW/MIA Table is a place setting for one and a table for all. The table is decorated with special symbols to help remember our brothers and sisters in arms.

Thirty-two years ago on Veterans Day in the Courthouse Square, the Tioga County Veterans Memorial was dedicated. It is a place to remember and reflect on the Fallen Heroes of Iraq, Vietnam, Korea, World Wars One and Two, and All Who Served. Tioga County gifted the Memorial to Owego as a 200th birthday present.

Nearby is the 128-year-old Tioga County Civil War Soldiers and Sailors Memorial, unveiled and dedicated to her martyrs on July 4, 1891.

Waverly has almost 200 Hometown Banners this Veterans Day thanks to extraordinary work by Becky Young of Becky’s Diner.

Nichols has over twenty 24″ by 48″ quality vinyl banners thanks to Veronica Ricketson, a local Girl Scout Ambassador working toward her Gold Award – the highest award a Girl Scout can achieve.

Veronica chose Hometown Hero Banners because she has a great respect for our veterans and she wanted to do something to honor not only them but also their families.

Tioga County has two new Veterans Memorials. Candor’s Memorial is near the front entrance of Maple Grove Cemetery off of Route 96. The memorial has a black granite stone monument and benches for seating at the base of the flagpole area.

“In honor of all who served from the Town of Candor in the military forces of the U.S.A. in war and peace to defend and preserve our freedom and in living memory of those who gave the ultimate sacrifice,” reads the inscription on the memorial.

Emblems from the six major branches of service are on display to include the Coast Guard, Air Force, Army, Marines, Navy and Merchant Marine.

Nichols dedicated its new Veterans Memorial Saturday morning thanks to Girl Scout Gold candidate Adeline Whitmore. The Owego Pennysaver will have more on that project in next week’s edition.

The Newark Valley Historical Society will honor Northern Tioga Veterans at the Newark Valley Fire Station. The free dinner for veterans from Richford, Berkshire, and Newark Valley will take place at 4 p.m. Dick Zavatto will talk about the Veterans Memorial in Candor.

Tioga County Legislative Chairwoman Martha Sauerbrey will present a Resolution of Appreciation for Retired Tioga County Veterans Service Officer John Holton, and then she’ll update everyone on the status of Tioga County being a Purple Heart County.

It took a lot of time to find soldiers overseas and their APO addresses to send packages to. Dorolyn Perry of Post 1371 Auxiliary will explain the project for deployed overseas soldiers.

President Danielle Ingram of the Veterans of Modern Warfare has a dream to fulfill – Route 17C throughout Tioga County to be designated as Gold Star Families Memorial Highway. Gold Star Mothers are those whose sons or daughters served and died while serving their nation in times of war or conflict.

Owego Kiwanis plants small American flags in a “V” for Veteran formation at their flagpole off Rt. 17C and near the on/off ramps across from McDonald’s. The American flag and POW/MIA flag fly 24/7.

Four founding members of Veterans of Modern Warfare Chapter 9 will be recognized.

Now a Pastor and still Chapter Chaplain, Norm Reeder was aboard the U.S.S. Cole when it was attacked by two suicide bombers at a routine fuel stop in Yemen’s Aden Harbor. The Oct. 12, 2000 bombing was the first act of terrorism on a Navy ship. Today he’s the Pastor of Central Baptist Church in Green.

Founding President Danielle Ingram dedicates her time to grow in the chapter. She has a high interest in Gold Star Mothers and Families. She ran a successful Mothers Day reception in Warner Hall. She’s doing all the detailed administrative tasks to designate Rt. 17C in Tioga County Gold Star Families Memorial Highway.

Tioga County veterans who died since Memorial Day will be remembered.

Marie Ward has an amazing scrapbook of WWII soldiers who while overseas wrote letters home. That correspondence was published – as was the practice then – in the weekly Owego Gazette and Times. Marie has transferred this data to a memory stick and will present the data on a TV screen; a hard copy will be available for review.

Like last year’s WWI display, the Tioga County Historical Society will have tables of interesting memorabilia. Memorabilia from all war periods is welcomed. Marty Schneider of Newark Valley will bring WWI papers, a binder and photos.

Owego Apalachin Middle School Social Studies Teacher Mike Bartlow welcomes veterans who would like to share their service experience and be interviewed one-on-one with his students.

Now, volunteer wreath details will be able to locate by GPS and place an evergreen wreath at Christmastime on the grave of a Tioga County Fallen Hero. That’s because Ryan Trenchard selected this important Service Project for his Troop 60 Eagle Scout project. Ryan will show and explain his 80-hour project including various listings of cemeteries and communities where Fallen Heroes are buried. Burials in Military Cemeteries overseas are also included.

Veterans Day will recognize female veterans who have been part of our military since the beginning. They’ll be honored for their special place in history.

President Trump’s proclamation encourages all, especially during November, to acknowledge and honor the service, sacrifices and contributions of veterans and military families for what they have done and for what they do every day to support our great Nation.

Not forgotten are veterans in nursing homes. The Ladies Auxiliary of VFW Post 1371 and the Veterans of Modern Warfare will visit Riverview Manor veterans in Owego.

Veterans at Elderwood in Waverly will hear their profile of military service at the Sayre Elks at the Monday afternoon service. The four Valley mayors will express gratitude for their service. The Valley Color Guard participates.

In 2016, the U.S. Congress passed the Veterans Day Moment of Silence Act that calls upon the “people of the United States to observe two minutes of silence on Veterans Day, beginning at 3:11 p.m. in honor of the service and sacrifice of veterans throughout the history of the nation.

America honors her veterans with a day of their own, a day that gives every rightful veteran the ability to talk, boast, and reminisce about their military service with their fellow veterans.

1 Comment on "Veterans Day to honor all who served"