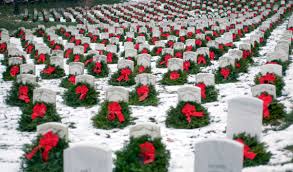 Wreaths Across America (WAA) has been placing wreaths on the graves of veterans for the holidays since 1992 – and now they’re expanding even further beyond America.

The Luxembourg American Cemetery is the final resting place of 5,073 U.S. service members and the Netherlands American Cemetery and Memorial honors the remains of 8,291 veterans. The 14,000 wreaths, provided by WAA founder Morrill Worcester, will be transported from Worcester’s farm in Maine to Europe on United Airlines flight.

Worcester’s dream from the very beginning of WAA’s operations – when Worcester’s family brought the surplus wreaths from their farm in Maine to Arlington National Cemetery for the first time – was to place a wreath in honor of every U.S. veteran laid to rest worldwide.

To have the honor to remember these soldiers at their final resting place and say each of their names so their memory lives on is something WAA takes immense pride in and will carry out with the utmost respect and dignity deserved.