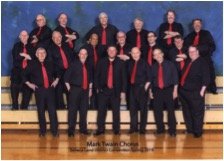 The Mark Twain Chorus, pictured, will be performing at the Church of the Redeemer in Sayre, Pa. on Nov. 10 at 3 p.m. Provided photo.

On Nov. 10, at 3 p.m., the Mark Twain Chorus, under the direction of Dave Cloyd, will be performing at the Church to the Redeemer, located at 201 S. Wilbur Ave. in Sayre, Pa.

If you love to hear those old-time songs sung in barbershop harmony and are even tempted at times to sing along, then this is the concert for you!  Presented by the 20-plus men of the Mark Twain Chorus, the concert will feature melodies that you hold dear from both past and present.

Organized in 1954, 2019 marks their 65th year of community service in the Twin Tiers area, performing in nursing homes, community celebrations, at concerts, and at fund-raising events. The Chorus performs annually for the Arctic League telethon and has contributed donations for more than 50 years. They compete regularly in the biannual Seneca Land District conventions and have taken blue ribbons three times consecutively, 2017-2018. The Mark Twain Chorus performs annually with the Crystal Chords, the women’s barbershop chorus organized in 1992.

This concert is free and open to the public. The 14-bell carillon located in the church’s bell tower will be played just prior to the start of the recital.

Upcoming concerts at the Church of the Redeemer include a Sunday, Dec. 15 performance by the OSFL Brass Quintet, a group of five active performers and educators from the area who will grace the church’s Christmas celebration with a concert of holiday music.

A future concert for spring of 2020 is still in the planning stage and will be announced at a later date.