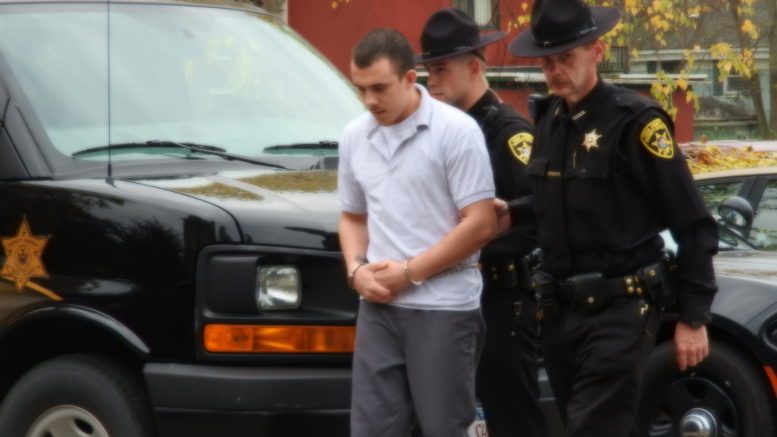 On Friday, Oct. 26, Cody Franciscovich, the man accused of murdering his daughter back in June, appeared in Tioga County Court. (Photo by Wendy Post)

Public defenders for Cody Franciscovich, the man charged with murdering his daughter back in June, appeared in Tioga County Court on Friday, Oct. 25 to ask the judge to dismiss his murder indictment due to evidentiary concerns. Specifically, public defender George Awad brought up concerns about the seizure of Franciscovich’s cell phone and whether police had a search warrant for it.

Assistant District Attorney Cheryl Mancini said she would check on this, and a Huntley hearing was scheduled for January to address the issue.

“We assume there will be testimony on the evidence at the next motion hearing and discussion of the validity of it,” said Thomas Cline, the other public defender working on the Franciscovich case.

Police arrested Franciscovich, 25, after Ruby’s mother alerted Tioga County Emergency Service officials on June 9 to check on the welfare of her child and the father. The call was placed from the Deep Well Motel on Route 17C in Owego where the family had been staying, and after responding police found Cody Franciscovich naked along the road.

Previous reports state that Franciscovich then directed police to where they could find his daughter, who was found dead facedown in a pond behind Saint Patrick’s Cemetery in Owego.

The State Police handled the investigation with assistance from the Tioga Sheriff’s Department, but officials from both the state police and the sheriff’s department said they had no comment and specifically deferred to Tioga County District Attorney Kirk Martin. When reached for comment, Mancini also deferred to Martin; messages were left for Martin, but he did not respond.

As to the progress of the case, Cline and Awad were tightlipped, but did say that the new changes to cash bail that go into effect Jan. 1 will have no impact on this case and that Franciscovich will remain remanded to county jail. However, Cline did leave the door open that the changes to discovery law that are set to also go into effect Jan. 1 might yield new information.

Despite initially being accused of first degree murder, which according to previous reports included allegations of sexual abuse of the victim, Franciscovich’s 8-month old daughter Ruby, Awad said that currently Franciscovich is facing two separate indictments of second-degree murder.

“They are operating under two separate theories,” Awad said of the prosecution.

He added that he does not expect any new charges to be filed.

“We have no comment on when this will go to trial,” Awad said, “We just don’t know at this point.”