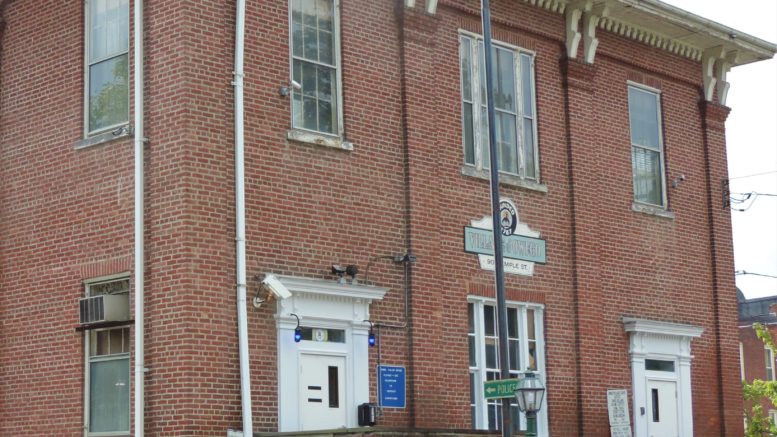 Pictured, is the Owego Police Department's headquarters located at 90 Temple St. in Owego, N.Y. In honor of the anniversaries of two fallen officers, Isaac Wiltsie and Forrest Allen Hall, the public is invited to a ceremony planned at OPD on Oct. 13 at 2 p.m. The date coincides with the 50th anniversary of Officer Forrest Allen Hall's last watch on Oct. 13, 1969. (Photo by JoAnn R. Walter)

Two fallen Owego police officers will always be remembered for their bravery and service to the community.

In honor of the two anniversaries, a ceremony is planned for Sunday, Oct. 13 at the Owego Police Department located at 90 Temple St. at 2 p.m. The date coincides with Hall’s line of duty death on Oct. 13, 1969.

The Owego Police Benevolent Association (PBA), in conjunction with the Owego Police Department (OPD), has worked for several months in planning the ceremony.

A granite memorial will be placed at the Owego police station in memory of Wiltsie and Hall.

OPD Officer Thomas Woodburn, president of the Owego PBA, along with Kathy Mazursky Bailey, a Binghamton resident who dedicates her time to assist area police in the creation of memorials for police officers killed in the line of duty, coordinated their efforts for the Owego memorial.

Bailey is associated with the monument that is now displayed outside of the Port Dickinson Police Station in memory of Officer Aldo A. Rossi, Jr. Rossi was struck and killed by a drunk driver while on duty in July of 2008.

Woodburn explained that various local agencies contributed to the Owego memorial, as did the Blue Brothers Law Enforcement Motorcycle Club, who presented monies they raised from their annual Fallen Officers Ride held in June. Money was also raised via a Go Fund Me account.

In addition, the PBA set up tents at both the Owego Strawberry Festival and Tioga County Fair, and where they raised money via bottled water sales, raffle tickets for prizes and the sale of other items.

Funds raised that exceed the costs associated with the memorial will be considered for use for a scholarship to be given to an Owego Free Academy graduate in the fallen Officers’ names.

Woodburn remarked about the memorial, “The granite stone is two feet by five feet and will be placed on the front of the Owego Police Department building.”

The memorial, a two-inch thick polished black granite piece, will be placed under a window near the center steps of 90 Temple St., and officially unveiled on Oct. 13.

The public is welcome to attend the ceremony scheduled to begin at the Owego police station at 2 p.m. State, county and village officials have been invited, along with family members of the late Officer Hall. The V.F.W. Post 1371 Honor Guard will participate and a bagpiper will perform.

The traveling public should be prepared to take alternate routes on Oct. 13.  Woodburn remarked that a portion of Temple Street would be blocked off from North Avenue to Church Street.

Prior to the ceremony at the police station, the OPD and police family and friends will hold a graveside service at Evergreen Cemetery where Wiltsie and Hall now rest. A procession will then travel from the cemetery to 90 Temple Street.

After the ceremony, guests are welcome to gather for a reception at the V.F.W. Post 1371 located at 207 Main St. in Owego. A luncheon featuring a chicken barbeque, a roasted pig, pizza and macaroni and cheese, as well as dessert, will be served. Water and soda will be provided.

The Tioga County Historical Society Museum, located at 110 Front St. in Owego, will be open on Oct. 13 in conjunction with the ceremony. A new exhibit at the museum, to run Oct. 5 through Oct. 25, showcases items associated with Wiltsie and Hall, and features other local law enforcement history.

Questions can be directed to the OPD Headquarters at (607) 687-2233. You can also search for the “Isaac Wiltsie / Forrest Allen Hall Memorial” on Facebook.