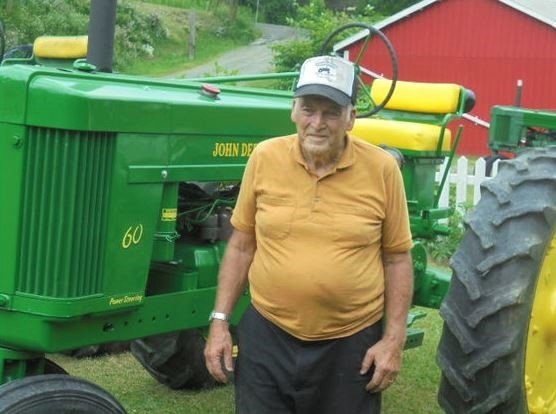 Pictured is Phil Card, a southern tier native who will have a majority of his extensive antique tractor collection up for auction on Oct. 12 at Goodrich Auctions, located at 7166 Route 38 in Newark Valley, N.Y. (Provided photo)

About 40 years ago, Phil Card, who lives in Endicott, acquired a tractor from his parent’s South Apalachin farm.

Phil reminisced about often watching his mother drive tractors back-in-the-day, and remarked, “I decided to have that tractor restored.”

That first tractor inspired Phil to harvest his own tractor legacy, so-to-speak.

Phil owned and operated Phil’s Chicken House, still a southern tier favorite, for decades, and managed then to carve out a little time to hunt for antique tractors. Phil has since sold the restaurant to his son.

“I still stop by for dinner now and again,” Phil said, and shared that one of the many tractors he has collected through the years is parked underneath a canopy next to the restaurant’s dining room entrance.

Phil also learned to fly, and took many trips in his four-seater. He mentioned taking his grandchildren for hamburger runs and also flying off with World War II veterans on day- trips for lunch. Phil recalled one longer trip that took him to Jacksonville, Florida, and where he visited restaurants to learn about the craft of southern-style barbecue.

“Only one is newer than 1960,” Phil said, and one aspect that piqued his interest more was, “A lot of the tractors I didn’t even know existed.”

Phil purchased tractors from various parts of the country and even Canada.

“I looked for tractors that couldn’t be found in this area,” Phil explained, adding that some were Internet purchases, and, even though a little risky, “I was not disappointed, but sight-unseen is different.”

Part of the draw, too, Phil remarked, was the, “Stories behind the tractors.”

One story involved a gentleman with Alzheimer’s who could no longer ride his tractor. His family was searching for the right buyer to get the tractor running again, and also had hopes that their loved one would see it in use before his condition worsened. Phil bought that tractor and got it running for the owner to see.

Phil’s love for tractors also inspired the beginnings of the Southern Tier Antique Tractor Club, and where, “Tractors are our passion, but charity is our goal!”

Phil is pleased how the club has evolved, which today averages about 70 members. He retired from the role of President in January, but remains linked to the organization.

Club members attend special events, such as riding in the annual Strawberry Festival parade in Owego. For more than 20 years, Phil showed off his tractors at the former Rudin Farm Days, and last year showcased some of his collection at the Newark Valley Apple Festival. Phil’s wife, Dottie, has often driven her purple John Deere in parades, too.

Charity is the club’s mission, and Phil added, “We have always given back to the community.”

For example, thousands of pounds of sweet corn and potatoes have been donated to local hunger outreach organizations, and where all of the picking was done by volunteers from churches and scout groups, among others.

Today, at 80, Phil’s extensive antique tractor collection will be a part of a large auction planned for Saturday, Oct. 12 at Goodrich Auctions, located at 7166 Route 38 in Newark Valley, N.Y., and at the intersection of Routes 38 and 38B.

Phil explained that the time has come to let go of most of his tractors. He didn’t want to leave the task for his wife or family to deal with down the road.

More than 35 antique tractors will be at the auction. Phil remarked, “Some I like better than others,” and chuckled, “I like them, but I’m not married to them.”

Phil plans to keep about seven tractors from his collection. It’s his hope that the auctioned-off tractors will go to good homes.

The auction also features tractors from separate collectors, along with parts and other farm equipment. A preview is planned on Oct. 11.

Ed Goodrich, of Goodrich Auctions, commented, “Thanks to Phil, many young people learned to drive and operate antique machinery on his tractors we are now selling,” adding, “The tractors for sale have had the best of care and are all shed-kept. You will be proud to take one of Phil’s tractors home!”

Phil plans to stop by the auction, and he’s anticipating some pretty good stories will come out of it.

For additional information, call (607) 642-3293. For a complete list of auction items, visit https://www.goodrichauctionservice.com.

Be the first to comment on "For the love of tractors"