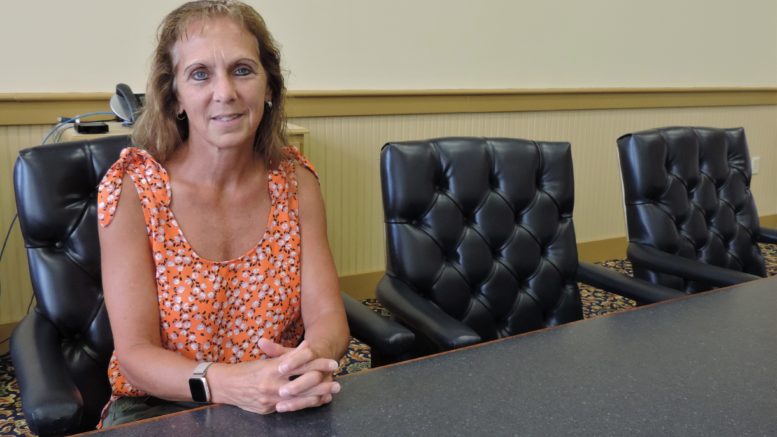 Tioga County legislative clerk, Maureen Dougherty, is set to retire from her position effective Friday, Sept. 13. Dougherty has served the Tioga County Legislature for the past 33 years.

Tioga County legislative clerk, Maureen Dougherty, is set to retire from her position effective Friday, Sept. 13. Dougherty has served the Tioga County Legislature for the past 33 years.

“I am very appreciative and grateful to those who gave me the opportunity with the Tioga County Legislature,” Dougherty remarked, adding, “It’s been a rewarding career.”

Dougherty explained that she has worked with ten Chairs and 29 Legislators, and said, “It has not only been a job, but has been my every waking moment for the past 33 years.”

Dougherty commented that a change in the dynamics within the current Legislature prompted her to make the decision to retire now. Dougherty said, too, that she looks forward to spending more time with her family, which includes two sons and five grandchildren.

She remarked, “I have worked very closely with many employees of the County,” adding, “Tioga County has some of the most resourceful and dedicated employees that I have ever seen, and I will truly miss working here. It has been like a family.”

Dougherty grew up on a busy chicken farm in Candor along with six brothers and sisters, and where, she said, she learned important values and a hard-work ethic. Dougherty credits her parents for raising her in a nurturing family.

It was in 1986 that General Lyon, a long-time legislator, approached Dougherty about the Legislative Clerk position. Dougherty credits Lyon, along with countless others, of supporting her throughout her career.

Prior to her role at the Legislature, Dougherty worked for ten years in law offices and also as a village clerk in Candor.

The legislative clerk provides administrative support to the County Legislature, such as organizing meeting agendas, recording minutes and legal notifications, along with publishing the legislative proceedings, resolutions, and local laws, just to name a few. The Legislative Clerk also processes all vendor payments to ensure they meet County guidelines, and audits those purchases to ensure they meet controller guidelines.

Dougherty chuckled as she described one aspect of her job, “I have written so many resolutions. There should be a Pulitzer Prize for that.”

Dougherty explained that she has watched the Legislature grow and change, “From being elected every two years and then going to staggered terms.”

She was appointed Tioga County’s first Auditor in March 1989 and has held that role continuously since then. In addition, she has participated in the New York State Clerk’s Association. An orientation program that Dougherty helped develop for new department heads and legislators is still in use today.

Dougherty has been a building coordinator at 56 Main St. since its inception, and previously held the roles of State Aid Coordinator and Performance Management Coordinator, among other roles. Dougherty has also worked closely with Towns and Villages throughout the county, which included the training of Village of Owego employees on an accounts payable system.

During Dougherty’s tenure, the task of upgrading two financial systems took place and a County Manager was put into place and then rescinded.

When asked what aspects have made improvements in the county, Dougherty replied that there have been many; however, “The building of a new jail and the opening of the Health and Human Services building have made a considerable difference in the county.”

As for the many challenges in 33 years, Dougherty said, “Being displaced from 56 Main Street after the 2011 flood was one of the most difficult time periods.”

Amy Poff, benefits manager, offered these words about Dougherty, “I have worked with Maureen for many years, and she is a great resource. Often when I have a question on a county topic, my first phone call is to Maureen,” and she added, “Maureen takes great pride in her work helping operate Tioga County government.”

Rita Hollenbeck, chief accountant and budget officer and Tioga County Treasurer, offered these remarks, “Maureen is the foundation of the entire county structure. I really don’t think it’s possible to replace her dedication, loyalty, integrity and fairness.  Unequivocally Maureen has served the county and its residents proficiently and with 100 percent commitment. For many years to come all the processes and procedures she developed and implemented will be used by county employees and legislators alike,” and added, “Her example and leadership will be missed! These will be the toughest shoes to fill.”

Maureen Dougherty will be recognized at the Legislative Meeting on Sept. 10. An informal gathering in her honor will be held at the American Legion on Sept. 12.

For more information about the Tioga County government, visit www.tiogacountyny.com.