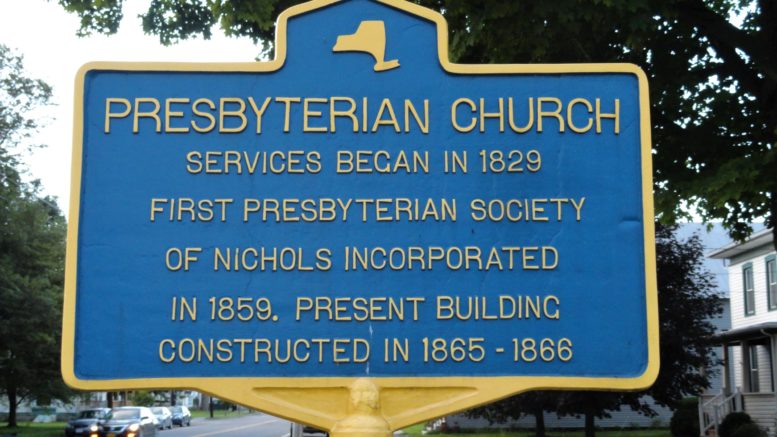 Pictured is the marker identifying the Nichols First Presbyterian Church as a historic property. Provided photo.

The First Presbyterian Church of Nichols, located at 140 Main St., is celebrating its 160th year on Sunday, Sept. 8.

Following the regular Sunday worship service on Sept. 8, a catered reception will serve up lunch-style foods and a cake for dessert. The public is invited, and all are welcome.

The worship service starts at 11 a.m. In addition to current pastor, George Budine, the service will feature former and retired pastors. Budine, raised in Nichols, has served the church since 2010. The history of the church dates back to Andrew Jackson’s time as U.S. President.

The Town of Nichols built a house of worship for all denominations known as the “Free Meeting House” in 1829. The building was dedicated in 1831.

The first religious organization was known as “The Free Meeting House Society,” and was followed by the First Presbyterian Society, which was incorporated on Sept. 8, 1859.

Several notable residents became charter members of the church, and whose last names are still well-known and remain in the community fabric today, such as Kirby, Lounsberry, Cady and Barstow, just to name a few.

The Presbyterian Church shared use of the Free Meeting House with the Methodists until their own building was completed and dedicated in November 1866.

Sadly, construction of the current building was challenged by the Great Flood of March 17, 1865. The flood washed most of it away, and, interestingly, according to church records, the contractor was forced to purchase all new material at his own expense as specified in the construction contract.

Karen Herrala, Nichols Presbyterian Church secretary and treasurer, shared that a remarkable treasure inside the church are its stained-glass windows. The windows were presented to the church in 1902 by George M. Cady.

Herrala, a long-time Nichols resident, noted, “As a young elementary school student, I remember my class took a field trip to the church just to see the stained-glass windows.”

Several renovations have occurred at the church over recent years. Ground broke in June 1995 for a new Social Hall on the east side of the original building.  With funding received from several sources, a pastor’s office, rest rooms, kitchen and an area for Sunday school and other activities were also added. The new section was dedicated in September 1996.

Since 1996, the church has undergone other maintenance projects and upgrades, to include a roof replacement, outside painting, and the installation of two disabled ramps, and all made possible with grants and fundraisers.

Herrala explained that despite the fact that there are just over 30 active members at the church, the congregation works diligently to serve the greater community.

The Social Hall is used for meetings, gatherings and celebrations, such as two Girl Scout troops who use the facility weekly. The church supports the area Little League, Fire Department, Lounsberry Food Pantry and Catholic Charities, just to name a few.