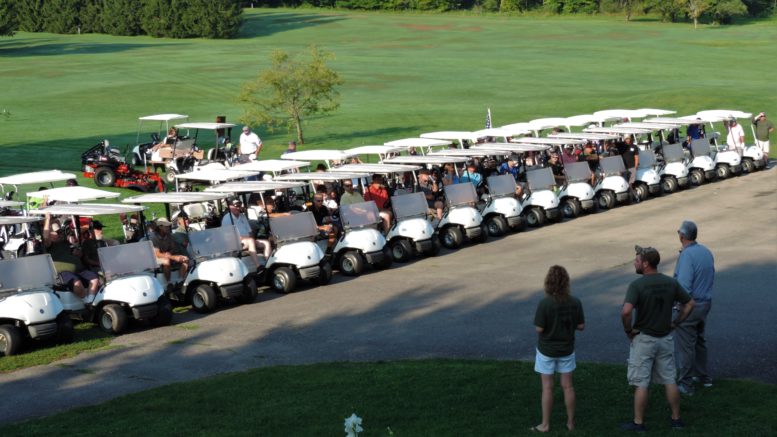 The SSG Christopher W. Swanson Golf Tournament was held on Aug. 17 at the Apalachin Golf Course, located at 607 South Apalachin Rd. In its eighth year, the tournament hosted 26 teams and brought in nearly $24,000 for the Maryland-based non-profit that assists veterans and their families.

If John Shearer were there, his family believes he would have been extremely pleased. The WWII Army pilot, granddaughter Connie Kopalek said, would have liked the fact that his golf course was hosting an event that gives back to veterans and their families.

Shearer passed away in 2003. Part of the legacy he left behind is the Apalachin Golf Course. Nestled amongst rolling hills and scenic views, it’s obvious why Shearer thought the property was the right choice for a golf course. Shearer, an avid golfer in his high school days and throughout his long-term IBM career, saw a need in the early 1960’s for a new course. Originally a 9-hole course he designed and built by hand on hundreds of acres of farmland, and much of it wooded, Shearer eventually had it transformed into a challenging 18-hole course.

The tournament attracted many local golfers, including Jim Morris from Owego, a fire department chief and hose team member, and Rome, Pa. native Troy Brown who served three years in the U.S. Air Force in England. Both Morris and Brown cited that it’s important to them to give back to organizations that assist others who have served.

Kyle Cunningham is happy to hear that kind of feedback from tournament participants.

A Vestal native, Cunningham is a U.S. Army veteran who served in Iraq and Kuwait. When he returned home after six years overseas, he decided to take up golfing.

As a way to give back to other veterans, Cunningham started the golf tournament. Participants enjoy a dinner and raffles after play. Held elsewhere in its first year, it seemed a better fit to relocate it to Apalachin. Call it meant to be, Kyle met his wife at the course, and now his father works there.

Christopher Swanson was Cunningham’s squad leader, and that is how a Maryland-based charity is connected to Apalachin.

While supporting Operation Iraqi Freedom, Staff Sergeant Christopher Swanson was killed in July 2006 from injuries he sustained when his patrol encountered enemy forces small arms fire. Just 20 days before, Swanson was injured by an IED that required 20 staples in his leg. A dedicated leader, the 25-year-old Swanson believed in his mission, and instead of taking a medical R&R on what was his third deployment in Iraq, he chose to return to his squad.

Previously, Swanson had been a paratrooper with the famed 82nd Airborne Division and received several military awards during his career. He now rests in Arlington National Cemetery.

Gary Swanson, Christopher’s father, commented, “The wonderful people in Apalachin have become like family to my wife Kelly and I. We are grateful for the support to our Veteran Charity,” adding, “We are also proud of Kyle, who served with our son, for his continuing commitment to give back.”

In honor and memory of their son’s life, the Swanson’s created the non-profit, the SSG Christopher W. Swanson Support Charity for Veterans and their Families, Inc. Since 2008, the organization has assisted with funds for professional and peer-counseling and granted student scholarships, among other assistance. The Swanson’s have even offered up their mountain cabin located in northeast Tennessee free of charge to veterans, as a way for them to recharge or spend time with their families.

Another example of how the charity has helped, Cunningham explained, “A friend I served with now has a PTSD service dog.”

The Swanson’s thank the local community for, “Believing in our mission that allows us to provide services and programs for those who are and have served our great country,” and added, “It is only fitting that the Apalachin Golf Course is where we have found a home-away-from-home because of the history behind its inception.”

John Shearer would be happy to hear that, too.

For more information about the charity, visit www.ssgswansonveterancharities.org/. You can also find the organization on Facebook.

For more information about the golf course, find them on Facebook, or visit www.apalachingolfcourse.com.