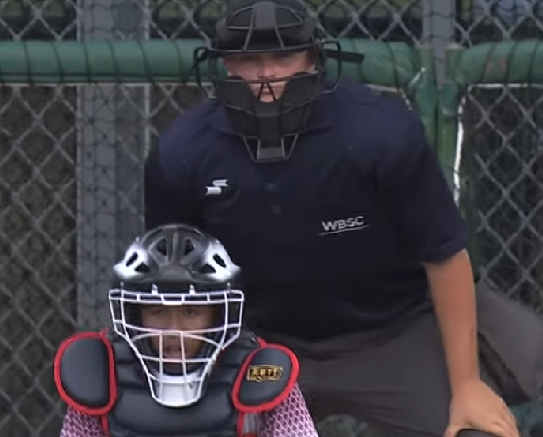 A college softball injury that disrupted play for 2014 Owego Free Academy (OFA) graduate Jillian Silvanic hasn’t stop her from staying in the game.

A lifelong love of softball and baseball has opened doors to a new passion for Silvanic, and that is being behind the plate as an umpire.

Silvanic recently umpired games with the World Baseball Softball Confederation (WBSC) in Taiwan. She was one of two women umpires at the U12 Baseball World Cup held July 26 through Aug. 4.

The Taiwan games are not the first time Silvanic has been on the world stage. Last August, Silvanic was one of four umpires who represented the U.S. in the women’s World Cup play in Florida.

Closer to home, you might catch Silvanic umpiring little league games in Owego. Had she not already been selected for the Taiwan series, Silvanic was geared up to umpire at the little league championship games held in July at Hyde Park in Owego.

Silvanic was a four-year letter winner and an All-Division in her freshman, junior and senior softball seasons at OFA. Named All-Conference in her sophomore year, she racked up more than 25 homers, along with a .441 batting average.

While at OFA, Silvanic played three years of basketball, too, and was part of the team that took home victory at the 2012 Sectionals.

Silvanic went on to attend St. Peters University in Jersey City, N.J. where she had a successful first softball season. However, a back injury, followed by surgery, closed the door on her college career at the Division I school.

“It was a hard situation,” Silvanic said.

Yet, despite the disappointment, she kept a positive attitude. And, not too long after, a new door opened.

Silvanic summed it up, “The injury presented different opportunities for me.”

She did go on to complete her college education, and most of it done on-line because of her injury. She acquired her Bachelor’s degree via Hudson Valley and Columbia Southern Universities.

Now in her fourth year of umpiring, Silvanic is involved with the Endicott Umpire’s Chapter, and where she regularly umpires local high school games.

Silvanic remarked about the local games, “I also enjoy giving back to the community.”

When asked about her experiences in Taiwan, Silvanic commented that, at times, she encountered language barriers. Working through those difficulties were made a little easier, she said, because, “Baseball has its own language.”

Overall, Silvanic said that the Taiwanese value the game of baseball.

She remarked, “You can say they love it since they built a new $130 million stadium just for these games.”

According to the WBSC website, the Tainan Asia-Pacific International Baseball Stadium and Training Centers was designed for young athletes aged 12 and under and will host the next five U-12 Baseball World Cups through 2027.

Since she was in Taiwan for several days, when asked about every-day life there, Silvanic chuckled as she shared, “One of the main forms of transportation there is the moped,” and added, “We pulled up to a stop light once where I saw four kids and parents on a single scooter.”

A former player in the Owego Little League for about six years, Silvanic played until age 12, and then followed up by playing teener league until age 15.

When asked what she would say to Little League players today, her response was, “Just have fun with it,” adding, “You learn so much more about life’s values, about teamwork and hard work.”

Silvanic continued, “Just keep playing. There are a lot of opportunities that stem from playing sports.”

Although traditionally a male-dominated field until more recent years, it is Silvanic’s hope that more umpiring doors will open as she moves forward.