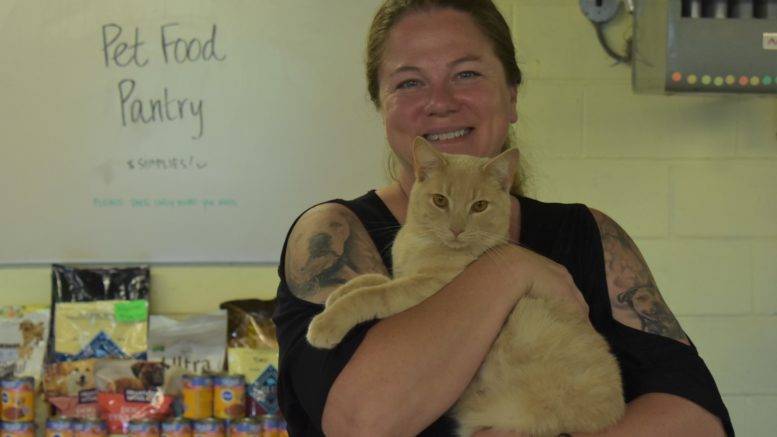 en Woodard-Reynolds, who is three months into being Stray Haven Humane Society’s executive director, holds Simon the cat, who is up for adoption. Woodard-Reynolds plans to maintain Stray Haven’s low cost medical programs, while increasing the shelter’s foster and educational opportunities. (Photo by Jacob Elsbree)

Jen Woodard-Reynolds adds her knowledge of animal welfare to the staff at Stray Haven Humane Society as its new executive director, a position she has filled for the last three months.

Her career started in the Los Angeles area working for the Best Friends Animal Society. She served as director of animal control of Kern County, and eventually vice president of training programs for Caesar Millan, better known the Dog Whisperer.

Though her work, she has seen animal welfare evolve over time. Mainly the change has been online.

“I think the beauty of animal welfare right now is really the Internet. And with social media, it’s really kind of united everybody,” Woodard-Reynolds said. “I started before social media was a tool, and when it came about, it really connected rescues and transport programs.”

Woodard-Reynolds was involved in one of the first animal transport programs sending Chihuahuas from Southern California, where they are in abundance, to New York.

Now, Woodard-Reynolds finds herself in New York at Stray Haven where she works to connect the community and animals alike.

“We are helping those who cannot keep their animals,” she said. “We’re helping the animals that are lost in our community, and we are providing a safe haven for them and bettering them as they transition through us to their next home.”

Under her and the Board of Directors’ leadership, Stray Haven will be continuing its vaccination and spay and neuter clinics, which will remain at low cost to the public. Woodard-Reynolds also wishes to provide more training and educational opportunities, whether it is to the public or to youth in schools.

“We want people to understand what it means to be a responsible pet owner,” she said.

One goal Woodard-Reynolds holds high is increasing Stray Haven’s number of animal fosters in order to give the animals a better chance of getting adopted, as well as getting them out of the shelter.

“This is a stressful environment in every way,” she said. “It’s loud. It’s chaotic. If you think about it, a lot of these animals come from a home with one or two other people, and now they’re here with 30 other dogs and 60 cats and 15 staff members living in a kennel – and that’s just not normal.”

Volunteers can fill out a foster application online or in person to get a chance to be an extension of the shelter but with perks for the dogs and cats as well as kittens and puppies. With an animal getting the same level of care, but living in a home its stress level decreases dramatically, leading to a healthier life for the animal in its transition time.

“If we didn’t have a foster, some of them wouldn’t have made it”

Kennel and cattery staff, who are balancing so many dogs and cats who may have individual needs, spend most of their day cleaning and giving the animals the attention they deserve. But with so many, this can be a challenge. Woodard-Reynolds told the story of Holly Jo, a bull terrier that was so stressed in the kennels that she developed medical issues.

A foster was found for Holly Jo, Woodard-Reynolds said, and the dog relaxed immediately. She was a whole new dog, once she got out of the shelter environment. The foster eventually ended up adopting Holly Jo.

Stray Haven is there to support the foster through the whole process. If needed they will supply the necessities — litter, cat condos, medication, food — at no cost to the foster. Many of the kittens and puppies that are fostered may have medical issues, which the shelter then sets the foster up with contacts.

One of the most important services that fosters’ give is their connections. Woodard-Reynolds hopes that fosters are involved in adoptions, whether that be finding its forever home, or as simple as walking a dog with a bandana saying, “Adopt Me.”

To learn more about Stray Haven or any of its programs, you can contact them by calling (607) 565-2859, or by visiting them online at strayhavenspca.org.