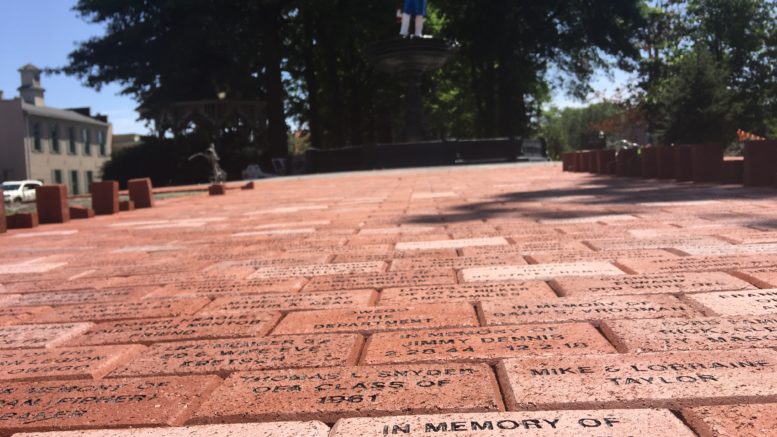 The memorial walkway that leads to the Baker Fireman’s Fountain in Owego. Bricks are still available, and can be purchased by visiting www.owegohoseteams.com. (File Photo by Wendy Post)

The long anticipated restoration of the Baker Fireman’s Fountain in Owego, N.Y., and located on the Courthouse lawn, is near completion. To celebrate the fountain’s return, the Owego Hose Teams, Inc., who led the fundraising and restoration efforts, have already planned a celebration for Saturday, Aug. 24 in downtown Owego.

The Aug. 24 celebration will kick off with a ceremony at the fountain in the Courthouse Square at 9 a.m.; a firefighter’s parade will step off at Fox Street at 10:30 a.m. and continue to North Avenue and then Main Street. Hose races will begin at noon on lower Front Street, between Parker Lane and Academy Street. An after-party, featuring The Gents, will wrap up festivities at 5 p.m. at the Rainbow Trail on North Avenue.

The fountain, which dates back to 1914, was given to the Village of Owego and its firefighters by Frank M. Baker as a memorial to his son, George Hobart Baker, who was killed in an automobile accident in 1913. Both men had been members and chief engineers of the Owego Fire Department. The fountain was last restored in 2000 and fell into disrepair.

The fountain was sent to Alabama last year for restoration, and then sent back to the Courthouse for re-installation. The bricks around the fountain, to include the memorial bricks, have been installed.

The Owego Hose Team, however, is still selling engraved bricks. Visit www.owegohoseteams.com to learn more or to purchase a brick. You can also follow them on Facebook @owegohoseteams.