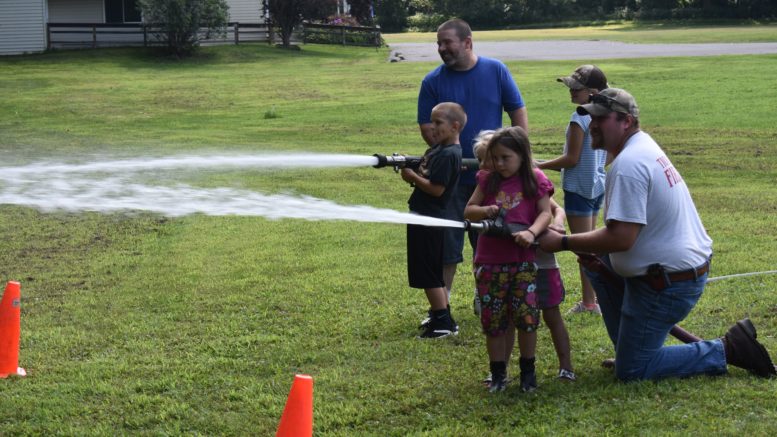 Using a fire hose guided by a member, kids had to push a ring up a rope, hit boards hanging from the trees, and knock down inflatable’s. (Photo by Jacob Elsbree)

With temperatures soaring, the cool mist coming from the spray of a fire hose was a perfect way to cool down and have some fun. The Tioga Center Fire Department (TCFD) opened their doors to the public last Saturday, Aug. 3, and had games and prizes for visitors.

The main attraction was a fire hose drill run behind the firehouse. Teams, because “firemen always come in pairs,” used the pressure of the hose to move rings up into the trees, hit targets, and knock over inflatable punching bags. It wasn’t just for the kids though. After they stopped playing, the firemen of the department immediately picked up the hoses for their own competition.

But there was more than just fun with the equipment on Saturday. Bob Nugent, second assistant chief, is proud of the department’s 70-year history and role it takes in the community. The department serves the district of Tioga Center by providing fire and EMS services at no cost to the community run by volunteers, unlike other communities who charge for ambulance response.

“Tones go off, we come. We don’t get a pay check out of this,” Nugent said.

Nugent said that events like this are to show the community that the fire department is present. He says the stereotype of fire departments is that no one is here until the tones go off, then they roar down the street in their big red trucks, come back and shut the doors. But the opposite is true, he said.

“We’re here, we’re in the community, we want to help out how we can,” he said, adding, “and try to get some people interested in joining.”

The TCFD is also launching its new Junior Member Program called the CREW, a hands-on training program for kids ages 16 and 17. Trainees will be split into small companies under the direct supervision of a senior member, Board Member Shellianna Decker said. Juniors will accompany seniors on calls and receive training on each truck, learning its ins and outs. Once they are 17, CREW members can begin the EMS program.

Not only would this create more TCFD members, but also Decker says this program would forge a path for the junior members to potentially become paid firefighters elsewhere because of the training they will receive.

As well as an outlet for their energy, the CREW creates an opportunity for youth to serve their community and “learn what it means to be a community member,” Decker said.