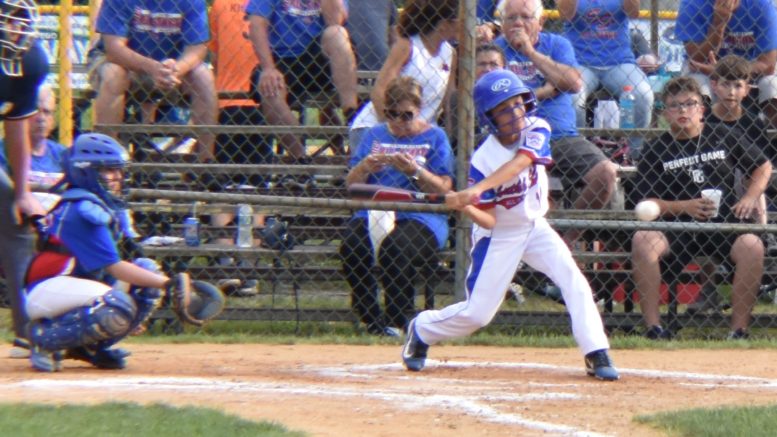 With eight teams of 15 players, plus families, coaches and staff, Hyde Park and the Village of Owego welcomed an estimated 600 to 700 people last week for the New York State Little League 10 and Under State Finals.

Matt Rowland, father of Tyghe, from the Plainview Hawks in Long Island, spoke with The Owego Pennysaver without taking his eyes off the field. He would interrupt himself every few moments with a “Go! Go! Go! Go!” or a “Run! Run! Run!”

The Plainview Hawks hold the state championship title from a few years ago.

“I don’t know if it all sinks in because they’re ten, but they know it’s special,” said Rowland, adding, “They goof around at the hotel, but when they come to this field you can tell they are focused.”

Tournament Director Tom Bronk said the games have gone on without a hitch. In fact, he and his team have received many comments on the quality of the fields; which are maintained and cared for by parents and volunteers.

Owego Little League is special because it is zero cost to parents for their kids to play. This astounded Rowland, who pays about $800 for Tyghe to play through spring, summer and fall seasons, not including club baseball, which the Rowlands are considering now that Tyghe is getting older.

“I’ll have to take that model back to Plainview. That’s amazing, because then you get a real buy in and people respect the property,” he speculated.

Bronk said for Owego Little League there is full parent involvement. For the last three years there have been many improvements to the park’s facilities. Parents and volunteers help with maintenance of the park, concessions, and always fill the stands for the games.

“That’s the biggest thing about Owego — the community,” Bronk said.

Visiting teams and their families have acquainted themselves with the Village of Owego. Rowland said his family favorite downtown spots have been Farmhouse Brewery, Las Chicas Taqueria, and Originals, which was able to satiate the heavy population of Italians on the Hawks, he said. They also visited Ice Cream Works, Carol’s Coffee and Art Bar, and Riverow Bookshop.

Eventually, however, they had to return to the fields, as there was baseball to be played. Teams spend about five hours a day on the field between practices and games. Bronk said traveling families and locals got to enjoy games at a high level, despite the teams being comprised of nine- and ten-year-olds.