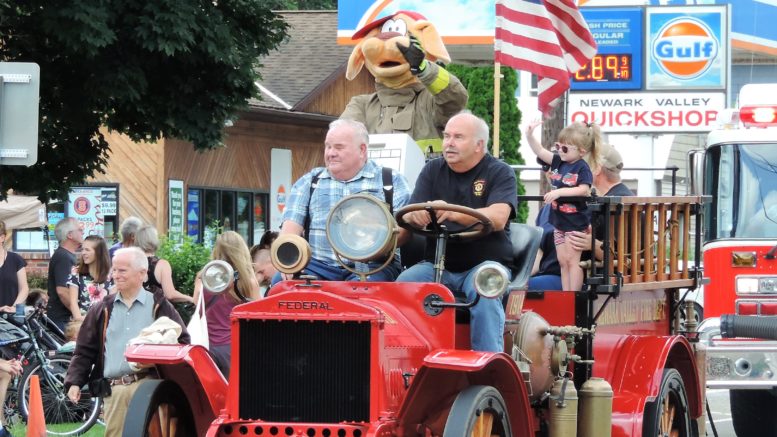 A highlight of the annual Newark Valley Summerfest is the parade, this year stepping off at 11 a.m. on July 27. For more information, find the "NV Summerfest" event page on Facebook. (File Photo / JoAnn R. Walter)

Plans are well underway for the 2019 Newark Valley Summerfest scheduled for Saturday, July 27, and hosted by the Northern Tioga Chamber of Commerce. The event will take place on the Village Green and Trout Ponds Park.

The popular, family-friendly festival begins as early as 9 a.m. The highly anticipated parade steps off at 11 a.m. and proceeds along Main Street and cruises around other neighboring streets.

Children can look forward to getting their faces painted, along with several games and activities. Summer favorites like cotton candy, and sno-cones and popcorn will be available, as will local maple products.

Live entertainment will be featured on the Village Green, and to conclude the event, the popular fireworks display will bring the sky to life at dark.

Residents are also asked to be aware of alternate traffic routes and closures during the annual parade.

The parade will start on Clinton Street, turning right onto Rewy Avenue, turning left onto State Route 38, traveling north for a distance of approximately one-half mile. The parade will then turn left onto Water Street, crossing the bridge and turning right on to Whig Street and travel for two blocks, turning left onto Franklin Street for two blocks, then turning left onto Elm Street and ending at the Trout Ponds Park entrance. The total distance of the parade is about 1.35 miles, however, only one-half mile of the distance would be on State Route 38. The estimated time, based on previous parades, that State Route 38 would be closed to traffic through the Village is between 45 minutes to one hour.

For general information and a full schedule of events, find NV Summerfest on Facebook, or contact the Chamber Secretary by email to northerntiogachamber@gmail.com.

JoAnn R. Walter and Wendy Post contributed to this report.