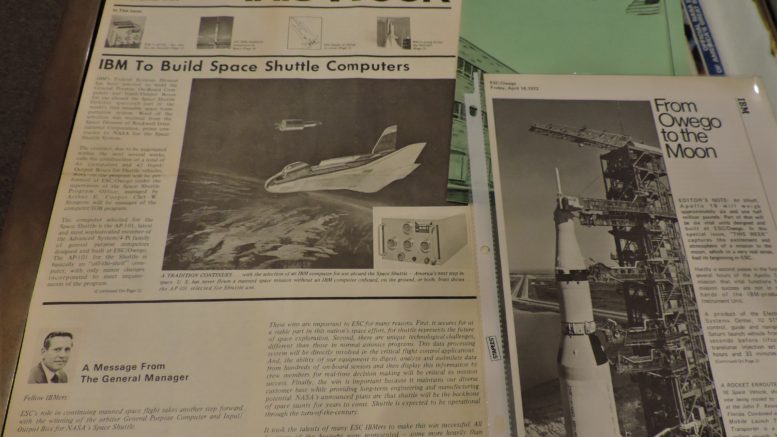 An exhibit honoring Owego’s role in the NASA Space Program and the 50th anniversary of the Apollo Moon Landing, “America in Space,” opens on July 20 at the Tioga County Historical Society Museum located at 110 Front St. in Owego, N.Y.

It was May 25, 1961 when President John F. Kennedy said; “I believe this nation should commit itself to achieving the goal, before this decade is out, of landing a man on the Moon and returning him safely to the Earth.”

Eight years later, Apollo 11 astronauts Neil Armstrong and Buzz Aldrin, along with Michael Collins, propelled into space. Excitement about that first moon landing in 1969 resonated throughout the world and forever impacted society and science, and has long remained a remarkable and revered feat.

Many know the famous words that Armstrong proclaimed as he planted the first human foot on the moon, “That’s one small step for a man, one giant leap for mankind.”

Aldrin’s description of the lunar surface, and according to nasa.gov, was, “Magnificent desolation.”

Closer to home, then 14-year-old Ben Gardiner was camping in the Adirondacks with his family when the moon landing happened. With no television at Cranberry Lake, Gardiner said he did the next best thing and tuned into the news of the landing using the family’s 1966 Pontiac car radio.

“I remember it like it was yesterday,” Gardiner remarked.

Today, Gardiner, from Windsor, often travels to Owego for events with his re-enactment group, the 137th New York Volunteer Infantry.

From the first human spaceflight program of the U.S., Project Mercury, to the most recent robotic explorers on Mars, the museum’s “America in Space” exhibit covers the history of all space endeavors.

Visitors will find documents and letters, NASA emblems and patches, pins, plaques, books, magazines and newspapers, and multiple models and toys, along with autographs, such as a piece that was signed by Astronaut Jim Lovell of Apollo 8 and 13 when he visited Owego.

Several photos are on display as well, including local astronauts; Eileen Collins of Elmira, Doug Wheelock of Windsor, and Doug Hurley of Apalachin. Collins holds the distinction of being the first female commander of a Space Shuttle.

One of the main attractions at the exhibit, according to museum director, Scott MacDonald, is, “IBM-Owego’s selection to build the input / output processor which was used in sixteen Space Shuttle flights.” The display also shows the mission insignia for each flight.

The Gemini Project, featured at the exhibit, is another space tie to Owego. The computer was made at IBM-Owego and was on board when astronauts orbited the Earth. Later, major components of the Apollo Saturn computer systems were made possible by technological developments at IBM-Owego.

Retired Colonel Doug Wheelock’s comment on his autographed photo will leave visitor’s wondering what is next in space exploration. It states, “The sky is no longer the limit. Aim high and touch the stars.”

Visitors are invited to browse the “America in Space” exhibit from July 20 through Sept. 28 at the museum. The exhibit is free to view, and hours are Tuesday through Saturday, from 10 a.m. to 4 p.m.

For information about “America in Space,” call (607) 687-2460 or email museum@tiogahistory.org.  You can also follow the Tioga County Historical Society Museum on Facebook, or view their website, www.tiogahistory.org.

Kopernik Observatory and Science Center, located at 698 Underwood Rd. in Vestal, N.Y. is also celebrating the 50th anniversary event.  Several family activities are planned on Friday, July 19 starting at 7 p.m. Find them on Facebook, or view their website at www.kopernik.org.