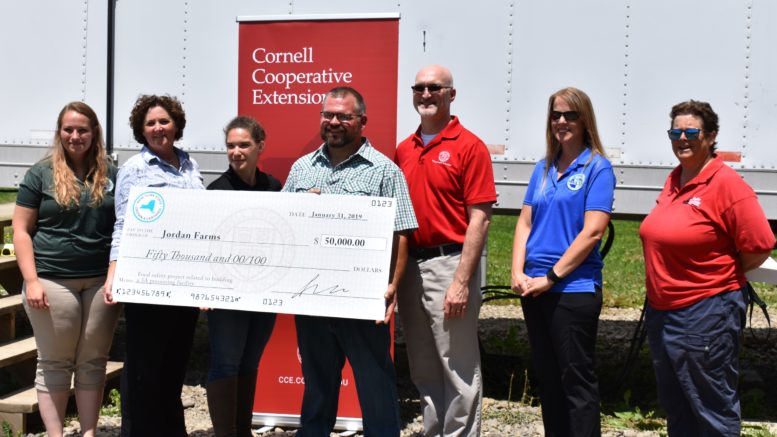 Justian Jordan, center, is pictured with members of Cornell Cooperative Extension, Team Tioga, and Tioga County Soil and Water. Jordan Farms was awarded $50,000 of New York State’s Grown and Certified Grant to expand its poultry processing plant in order to sell products in stores and restaurants. (Photo by Jacob Elsbree)

Justian Jordan has found the golden egg with the opening of a New York State inspected poultry processing plant on Sunnyside Road in Nichols. The converted trailer has all the amenities and is quite the upgrade from their previous station – an old school bus.

It wouldn’t have been possible without New York State’s Grown and Certified Farmer Block Grant, which is designed to strengthen confidence in agricultural products produced in New York, and Cornell Cooperative Extension.

Cornell Cooperative Extension (CCE) applied for the Grown and Certified grant on behalf of the eight-county region, which resulted in half of a million dollars to be distributed, explained Andrew Fagan, executive Director of Tioga and Chemung Counties.

Through its partnerships, local farmers caught wind of this funding opportunity and could apply for up to $50,000 to upgrade their facilities to meet food safety requirements in order to sell products in stores.

“Jordan Farms is one of the first projects that was applied and has finished the grant program,” said Laura Biasillo, Agricultural Economic Development specialist of Cornell Cooperative Extension.

At Wednesday’s grand opening, she was joined with the rest of the project partners including others from CCE, Tioga County Soil and Water, Team Tioga, and Justian Jordan.

“The grant has allowed us to focus some of our farm’s capital toward more infrastructure to be able to focus on higher production to meet the needs that are out there for New York State raised and grown poultry products,” Jordan said.

“In addition to the grant dollars, Jordan has also put in a lot of sweat equity as well as other pieces and equipment that he has bought himself into this enterprise,” Biasillo said.

Prior to this, Jordan farms would process their poultry on-farm and were allowed to sell only to the end consumer. Now, with the grant money, Jordan Farms will be able to sell to stores and reach more people with their local products.

“What we’re hoping to do is to get our own product out on store shelves throughout New York State and some restaurants and to provide a processing service that previously did not exist in this area for other farms to get going and hopefully preserve some agriculture and the economy in the area,” Jordan added.

If other farms also use the Jordan Farms Plant, they can legally sell their products in stores as well, in turn, building the local agriculture industry.

Jordan said he is hesitant to give a number to how many birds they will be able to process with the new facility.