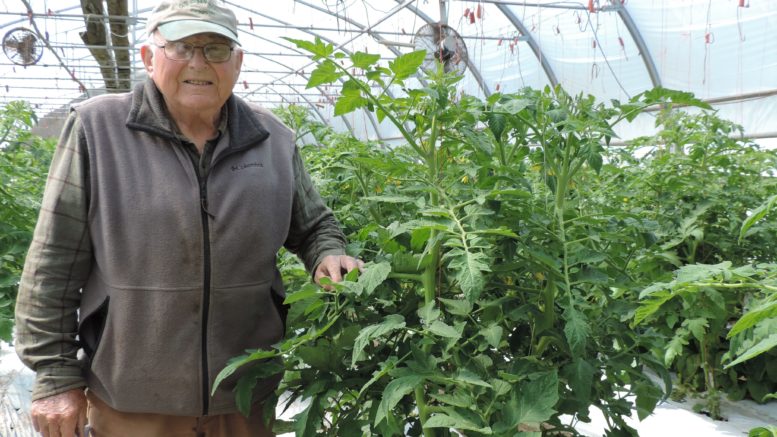 Frank Wiles of Our Green Acres, located at 3965 Waverly Rd. in Owego, N.Y., stands inside one of the greenhouses on the property. Here, he shows off his thriving tomato plants. Our Green Acres is known for its fresh seasonal produce, such as strawberries, blueberries, raspberries, peas, beans and potatoes, just to name a few. For U-Pick information, farm stand hours and Farmers Market hours, call (607) 687-2874. You can also find them on Facebook or online at owegogreenacres.wordpress.com.

Frank Wiles, of Our Green Acres, located at 3965 Waverly Rd. in Owego, N.Y., manages a smile despite the fact that strawberries are a bit late again this year.

A veteran farmer for more than six decades, Wiles maintains a guarded enthusiasm when giving an update about the popular summer fruit.

“We had such a wet spring, so that delayed planting,” Wiles remarked, and then further explained, “Because of that, the flowering and maturity of the plants are delayed, too.”

For this year’s main crop, Wiles expects that they should be ready by late June, with U-Pick hours at the farm opening up after the annual Strawberry Festival.

“The earliest I have ever seen strawberries ready was around May 25,” Wiles said, adding, “In my time raising strawberries, it has varied about a month.”

Strawberry Fest-goers will still find fresh strawberries at the beloved event, although sellers will need to look elsewhere.

Wiles is genuinely pleased about the progress of his day-neutral strawberries, a variety that was developed to produce through the fall months. The farm did pick over 75 pints of day-neutrals during the first week of June.

When this reporter visited Wiles on June 3, he commented, “Most of the remaining day-neutral’s should be ready in about two weeks, and sometimes we have them as late as Thanksgiving.”

Wiles reminisced about the Owego Strawberry Festival, and made mention of the fact that the first annual event was held later in the month of June.

Even then, Wiles said, he wasn’t sure if his strawberries would be ready in time.

“Local crops aren’t always ready, but like magic that first year, the strawberries ripened,” Wiles chuckled, adding, “I had to find people fast to help pick in time for the festival!”

Our Green Acres is also known for its fresh seasonal produce, such as blueberries, raspberries, peas, beans, potatoes and tomatoes, just to name a few.

Customers can purchase directly from the Farm Stand, or find them at area Farmers Markets. Or, customers can stop by Our Green Acres and pick their own favorites right on the farm.

An ongoing concern for berry farmers is a pest that threatens soft summer fruit known as the Spotted Wing Drosophila (SWD). As a member of the New York State Berry Growers Association (NYSBGA), an educational nonprofit, Wiles looks to them for valuable information and guidance.

Wiles remarked, “We (referring to all berry growers) are still trying to learn how to deal with it.”

According to the NYSBGA website, the SWD first invaded the northeast in 2012. Since then the NYSBGA has received funding from the state, the Invasive Species Council and the NYS Farm Viability Institute to conduct research to help growers manage the pest threat.

Wiles explained that the SWD appears in our area around the end of July, so it misses the timing of his earlier fruit crops, although keeping his day-neutrals and other berry crops thriving is a challenge.

The issue Wiles shared, has been, “Very daunting and frustrating to the grower.”

One innovative method some farmers have utilized to reduce crop loss is via “exclusion netting,” which reduces infestation rates, while the extra protection also withstands thunderstorms, hail and high winds.

Another strategy in the works, and one that Wiles said, “Is a fascinating idea,” is to plant a target crop on the outside of a field for the SWD to be attracted to, and then leave the inside portion of the field for crops to be harvested.

For U-Pick information, farm stand hours and Farmers Market hours, call (607) 687-2874. You can also find them on Facebook or at owegogreenacres.wordpress.com.

Be the first to comment on "Strawberry season is just around the corner!"