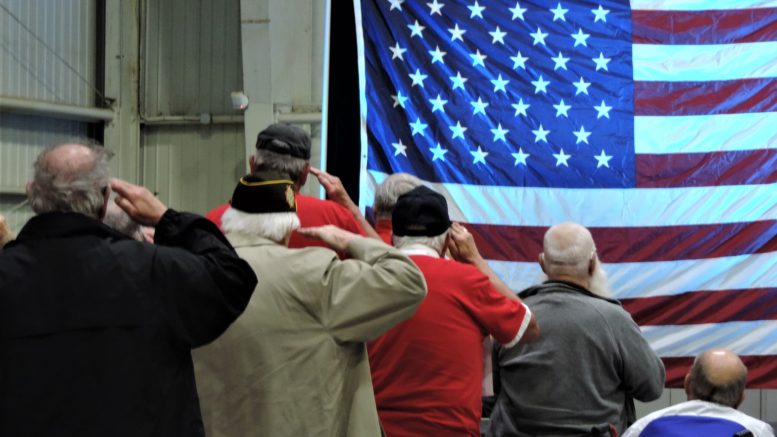 Pictured, are veterans saluting the U.S. Flag.  Tioga Central's Senior High band and chorus will perform at a spring concert, “Armed Forces – The Pride of America,” on Tuesday, May 21. The public is invited to the 7 p.m. show at the Tioga Central Middle School auditorium. Tioga's first district-wide art show will also be featured on the same evening. (File photo / JoAnn R. Walter)

Tioga Central’s Senior High band and chorus will perform at a spring concert, “Armed Forces – The Pride of America,” on Tuesday, May 21.  The public is invited to the show, which is scheduled to begin at 7 p.m. in the Tioga Central Middle School auditorium.

The occasion celebrates the Armed Forces, to include the U.S. Army, Navy, Air Force, Marines and Coast Guard.

In addition, National Guard members and first responders will also be acknowledged at the concert, which encompasses anyone involved with EMS, EMT, police, fire department members, K-9 units, service dogs and military dogs, to name a few.

Armed Forces Day, celebrated on the third Saturday in May, was proclaimed by President Harry S. Truman as a way to pay special tribute to the men and women of all military branches of the Armed Forces. This year’s Armed Forces Day falls on May 18.

Taking a step back in history, President John F. Kennedy delivered a speech in 1963 about Armed Forces Day, and his thoughts still ring true today.

President Kennedy said, in part, “Our servicemen and women are serving throughout the world as guardians of peace, and many of them away from their homes, friends and families. They are evidence of a harsh but inescapable truth – that the survival of freedom requires great cost and commitment, and great personal sacrifice.”

To celebrate the occasion at Tioga Central, the school band and chorus will perform a number of tunes, to include the Armed Forces Medley, a collection of the songs of the U.S. Armed Forces.

Guests attending the show will be provided lyrics so that they can sing along.

Other selections planned feature tunes from “The Greatest Showman,”  “Africa,” “A Million Dreams,” and classics from the rock group, “Queen.”

Coddington is requesting photos from the public to be included in a slide show presentation during the Armed Forces Medley. The slide show will also be televised in the school lobby.

“Please feel free to share a picture from a branch of service or other first responder organization,” Coddington explained, adding, “If you do not have a photo, please send in a name, branch of service, organization or troop number, and it will be displayed in the slide show.”

Also on the evening of May 21, Tioga art teachers, Laura Santobuono and Joellen Riggs, will be on hand to host the first district-wide art show. The show will represent art works from students in grades kindergarten through 12, and include several mediums and themes, along with various levels of artistic talent.

Tioga high school students recently participated in a ceramic show at Onondaga Community College. Their pieces will be on display at the district art show.

Santobuono said, “Since the concert is typically well-attended, the art department decided to piggy back.” It is hoped that the art show is well received and will become an annual event.

Individuals can email photos for the slide show to jcoddington@tiogacentral.org. Photos can also be dropped off to the high school office to be scanned.