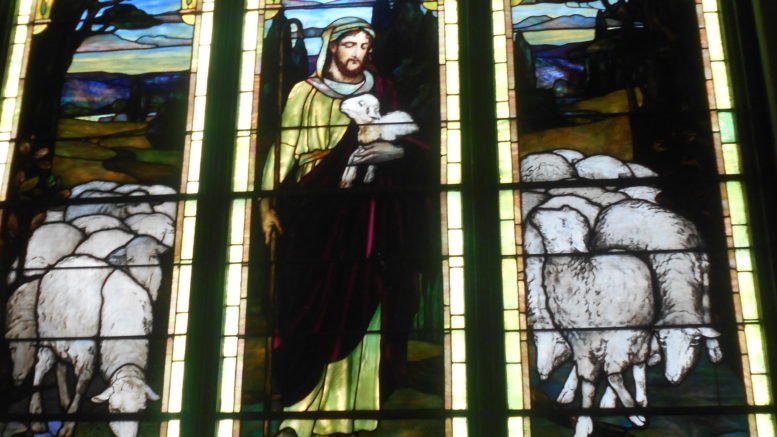 The New York Landmarks Conservancy is once again sponsoring a statewide Sacred Sites Open House on Sunday, May 19. The Sacred Sites Committee of The Preservation Association of the Southern Tier (PAST) hosts this local event. It is free and open to the public.

Sacred Sites in Binghamton, Johnson City, Endicott and Endwell will be welcoming visitors at varied times from 10 a.m. to 5 p.m. (check the times for specific opening and closing times of each site). The New York Landmarks Conservancy has set the theme of “From Medieval to Modern: Celebrating New York’s Religious Art and Architecture”.  There will be approximately 20 participants. This is an opportunity to be a tourist in your own neighborhood and view the spectacular interiors of varied religious structures in our community.

The sites are grouped in clusters along specific streets, neighborhoods or downtown areas. In this way, visitors can select groups of sites to visit that may be in walking distance of each other. Sites will welcome visitors, offer tours, sing hymns, perform musical recitals, explain architecture and art, stained glass windows, and tell the history of their building and congregation. Several sites also inform visitors about social and community activities that take place at the site outside of the religious service.

For a list of participants and their times in this year’s Sacred Sites Open House on Sunday, May 19, visit the PAST website at www.pastny.org or obtain flyers at most religious sites, local libraries and historical societies, community calendars and social media.

PAST and the Sacred Sites Committee would like to invite everyone to this very important event and ask your support of this program by visiting these spectacular architectural structures located right in our neighborhoods.

The following are planned to be open for the tour.

Binghamton – North Side and Downtown – Directions- Chenango Street near Binghamton Plaza to Court Street and Exchange Street to Conklin Avenue .

Centenary-Chenango Street United Methodist Church, 438 Chenango St. Open from 10 a.m. to noon. This 106-year-old edifice is a landmark on the North Side of Binghamton. The stained-glass windows are from the Haskins Studios in Rochester, N.Y. and are original to the building. A large two story arched stained glass window is centered on the facade. The interior has been maintained in its original appearance retaining a high degree of architectural integrity.

United Presbyterian Church – 42 Chenango St. Open from noon to 3 p.m. Designated a historic landmark, this Romanesque Style edifice is the second oldest church in Binghamton. Built in 1863 after a fire destroyed the building it contains a Tiffany Mosaic at the rear of the pulpit and a Tiffany stained glass window in the narthex.

The Landmark Church – 126 Court St. Open from 2 to 4 p.m. Built in 1866 in the Gothic style constructed of Syracuse limestone and brick. The church was designed by architect Isaac G. Perry and is part of the Court Street Historic District. Architectural details include carved wood friezes, heartwood cherry ceiling, and stained glass cathedral art memorial windows from Munich, Germany. The tower was removed in the 1930’s. This is also the site of the historic 1913 women’s suffrage convention.

New** Islamic Awareness Center – 74 Conklin Ave. Open from 11 a.m. to 1 p.m. Used as a House of Worship since 1871. Designed and built by architect Henry M. Congdon with double staircase leading to the main entrance. Roof features multiple gables with a tower at the rear of the building. Formerly the Church of the Good Shepherd, it was purchased by the present congregation in 2010.

Saint Michael’s Orthodox Church – 280 Clinton St. Open from 11 a.m. to 2 p.m. “It has been said that Icons are literally windows into heaven. Come and behold the glory of our Lord and His Saints through the magnificent Icons of St. Michael’s Orthodox Church. An atrium, containing 18 stained glass windows connects the church to the recreation center.

Dormition of the Virgin Mary Orthodox Church – 54 Baxter St. Open noon to 2 p.m. Three gold-toned domes dominate front facade of the church.  Locally known as St. Mary’s Church, the first service was held in 1916. The congregation was established by immigrants from Galicia in Eastern Europe. Interior contains a unique Iconostasis and the vestibule is dominated by a spectacular mural of the Virgin Mary, the namesake of the church.

First Congregational Church UCC – 30 Main St. Open from 11:30 a.m. to 1:30 p.m. Designed by Isaac Perry, built in 1869, enlarged in 1884. Historic marker identifies site as Peterson’s Tavern where Binghamton was incorporated in 1834. The remains of the tavern wall are still visible in the basement. Dominant front gable and side towers open to the sanctuary of fluted wooden columns and arches that support the clerestory.

Saint Patrick’s Church – 11 Leroy St. Open from 11 a.m. to 1 p.m. Isaac Perry was the architect, completed in 1873. It is of Gothic Revival Style. Stained glass windows were crafted by Franz Mayer & Co., Munich, Germany. Celtic cast stone cross is located on east front lawn of church. Presentation on history of the church at 11:30.

Trinity Memorial Episcopal Church – 44 Main St. Open from noon to 3 p.m. Constructed in 1895 in the High Victorian Gothic Style of New York bluestone with limestone trim. There are a number of beautiful stained-glass windows including the Welden Window, which dominates the south end of the church. Original Casavant organ, with recent additions and renovations will be played offering traditional Episcopal Service music during open house.

Tabernacle United Methodist Church – 83 Main St. Open from noon to 2 p.m. Dedicated in 1884. T.I. Lacey designed the Semi-Gothic style church of brick and Onondaga limestone trimmings. Alfonso Fredericks of Brooklyn painted the windows; some are memorial, depicting plants and flowers of the Bible Lands. A rose window is located in the north gable of the church.

New** Boulevard United Methodist Church – 113 Grand Boulevard. Open from noon to 2 p.m. Built in 1909, it is the work of architect N.I. Mather. Exterior walls are of red brick and features are outlined in cream-colored brick. The massive tower above the main entrance is at the intersection of Floral Avenue and Grand Boulevard. Stained glass window of the Good Shepherd is prominent in the sanctuary.

All Saints Episcopal Church – 475 Main St. Open from noon to 3 p.m. Main part constructed in 1918 in English Country Style of native stone and slate. The interior follows the chancel and nave floor plan with a clerestory having stained glass windows of symbols of the Apostles.

Sacred Heart Ukrainian Catholic Church – 230 Ukrainian Hill Rd. Open from 3 to 5 p.m. Unique style is Folk Architecture of wooden churches in Carpathian Mountains of Ukraine. Denysenko Family, father and son, wrote the icons and built the iconostasis. Rem Bohutyn was the artist of copper side altars and Stations of the Cross.

Saint John the Baptist Ukrainian Orthodox Church, One St. John Parkway. Open from noon to 2 p.m. Byzantine Style with three gilded cupolas. At the front entry is a mosaic of St. John the Baptist and monument to the millennium of Christianity in Ukraine. Mosaics and large stained glass windows surround the spacious interior. A highly decorated Iconostasis separates the sanctuary from the nave.

Endwell United Methodist Church – 3301 Watson Blvd. Open from noon to 4 p.m. Founded in 1921 at location where old Hooper School was later built and became the First Methodist Episcopal Church of Endwell. Present contemporary building of brick has had several additions including 100 ft. steeple installed in 1983. Fifteen years ago, sanctuary re-done. Photos of old church and renovations on display. There will be an Instrumental Performance during the open house.

Holy Nativity Lutheran Church – 312 E. Main St. Open from 1 to 3 p.m. Entry to the church features intricately hand carved doors in wood showing the life of Christ.  Former Vestal Art teacher and member, Eileen Fanning spent eight weeks carving the unique eight birch panels, which was part of a larger renovation that moved the entrance from the side to the front. There will be an organ recital during the open house.

New** Union Presbyterian Church – 200 East Main St. Open from noon to 4 p.m. The Church is celebrating its Bicentennial this year and is the oldest continuing faith community in the Southern Tier. Union Presbyterian Church worships in a Dutch Renaissance stone building built in 1907 after being struck by lightning. The interior has been renovated several times, the last by The Rambusch Decoratating Co. with Viggo Rambusch completing the work designed by Leif Neandross. Self-guided and guided tours of the Sanctuary and the Doris M. Edwards Museum will be featured followed by light refreshments.

New** Central United Methodist Church – 17 Nanticoke Ave. Open from 1 to 3 p.m. Structure is of red brick in the Gothic and Old English styles with a tower of Battlement style on the South Side of the building. In 1927 Lester A. Kaley designed the Gothic style sanctuary presently used for worship. The Gethsemane Memorial window is at the back of the Chancel. A historic quilt believed to be made in the 1920’s is on display.

Saint Andrew’s Church – 400 W. Wendell St. Open from 11:30 a.m. to 1:30 p.m. A plaque in the nave states: This church is the gift of the people’s friend George F. Johnson MCMXXIII.  Originally built for the Methodist Episcopal Congregation in 1923. The front facade exterior is of Tudor style with two towers. Present congregation moved here from Vestal in 2013. Five stones in the churchyard commemorate members of the Methodist Episcopal Church who lost their lives in World War II.