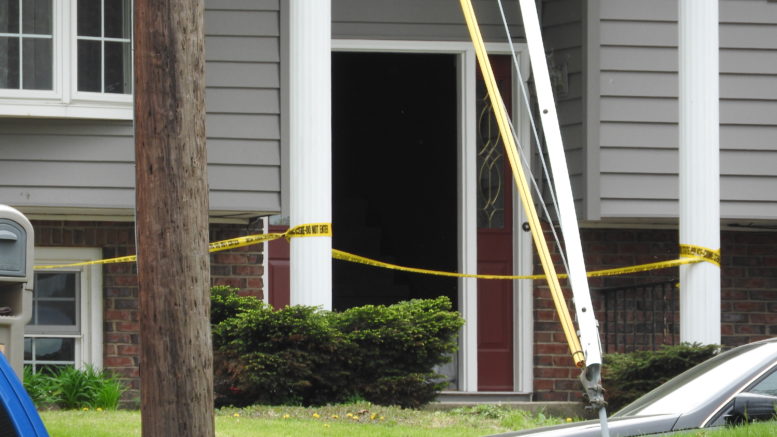 Pictured is the home at 5 Dorothy Rd., located in the Tioga Terrace neighborhood. An early morning shooting on Thursday left one dead at the residence, and two suspected intruders fled the scene. By 10:35 a.m., both suspects were apprehended, and have subsequently been charged with the Class A Felony of Murder in the second degree. (Photo by Wendy Post)

A five-hour manhunt ended at 10:25 a.m. on Thursday when the second of two men involved in a shooting on Dorothy Road in the Tioga Terrace neighborhood was apprehended.

Curtis Cuttino, age 40 of York, Pa., and Michael J. McVicker, age 46 of York, Pa., were both arrested and charged with the Class A Felony of Murder in the second degree following a deadly home invasion in Apalachin Thursday morning.

During a press conference held on Friday afternoon at the State Police Barracks in Kirkwood, N.Y., Captain Scott K. Heggelke, Bureau of Criminal Investigations, offered details of the investigation to members of the media.

According to officials, Tioga County 911 dispatched troopers to a residence at 5 Dorothy Rd., in the Tioga Terrace area of Apalachin, at approximately 5:55 a.m. on Thursday for a shooting. When troopers arrived, they found Brian A. Argro, age 32, deceased inside the front of the residence. Argro had been renting the home since October of last year.

A 20-year-old female was in the home and made the 911 call. She was unharmed, according to officials, and told troopers that two men came to the house, banged on the door, were let in by the victim, and a struggle ensued. Shots were fired inside the home, which ultimately led to the death of Argro and the suspects fled on foot.

Neighbors at the scene on Thursday morning described a similar series of events, stating that a woman was screaming outside shortly after 5 a.m., and then gunshots were fired.

The female was able to give police a description of the men, which was put out to troopers in the area, Tioga County Sheriff Deputies, and other law enforcement in the area.

At approximately 6:25 a.m. on Thursday, Tioga County Sheriff’s Deputies located Curtis Cuttino on State Route 434, detained him and turned him over to New York State Police.

A short time later, New York State Police Investigators received a call from the Vestal Police Department with information about a possible location of the second subject, who matched the description provided by the female.

At approximately 10:25 a.m. on Thursday, however, State Police in Troop F and the Monticello Police Department arrested Michael J. McVicker and brought him back to Binghamton. It was noted, during the conference on Friday, that McVicker has also been known to use the name “Lee Southerland.”

As far as a connection between the two men in custody and the Dorothy Road resident, investigators are still collecting information.

“We are still conducting interviews and looking at electronics,” said Captain Heggelke.

When asked by the media if the resident of the home, Argro, had a history with the law, Captain Heggelke stated that he was on parole for an unrelated gun charge in Broome County. The connection between the parties involved, however, is not clear to investigators at this time.

The time lapse between the time of the shooting and the time that the 20-year-old woman called 911 was also questioned, and investigators echoed what they said earlier, that the investigation is continuing and the evidence and search for some sort of motive continues.

The Troop C Forensic Identification Unit processed the scene at 5 Dorothy Rd. The Tioga County District Attorney, Kirk Martin remained on scene throughout the day and after consultation, both suspects were charged with Murder in the second degree and were remanded to the Tioga County Jail with no bail.

The body of Argro was released by the Tioga County Coroner and was transported to Lourdes Hospital for an autopsy that took place on Friday morning. The results are pending.

State Police are confident this was not a random act of violence based on the evidence that has been collected.

There are still questions unanswered, however, as investigators continue to piece everything together.

Investigators are still looking at the motive and are looking into how Cuttino and McVicker arrived in Apalachin.  If anyone has any information, contact New York State Police at (607) 561-7400.

You can view a video of the conference on The Owego Pennysaver’s Facebook Page.